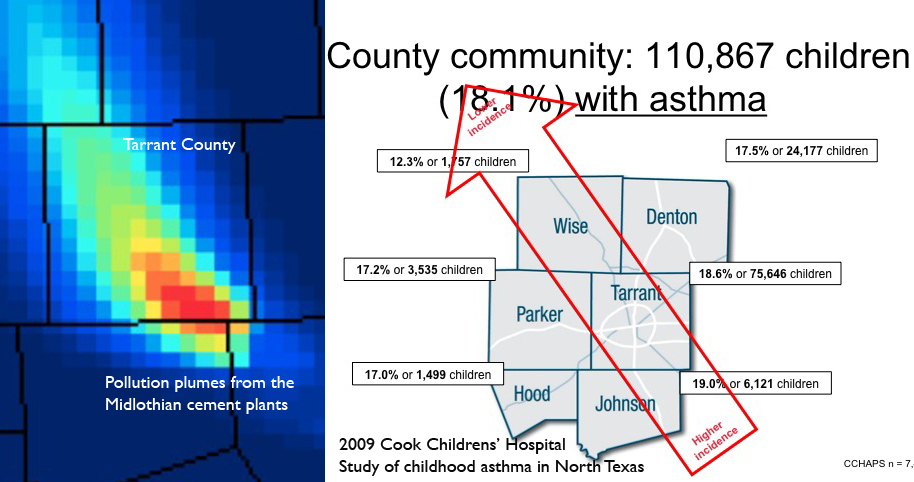 On the left is a computer-modeling image from the Texas Commission on Environmental Quality showing the direction of the predominant downwind plume of pollution from the three Midlothian cement plants - from extreme NW Ellis County, blowing diagnoally across Tarrant County and into Wise County. On the right is the map from the original 2009 Cook Children's Hospital CCHAPS study indicating levels of childhood asthma in the Hospital's service area. It tracks closely with the direction of the plume and asthma levels increase in closer proximity to the cemnt plants.

According to researchers Patricia Newcomb and Alaina Cyr from the UTA College of Nursing "…the bulk of Tarrant County asthma cases lie directly in the path of southeasterly winds that have historically carried high levels of particulate matter from working cement kilns in a neighboring county. Asthma prevalence increases in a linear configuration within the path of the 'cement plume' as residential location comes closer to the cement kiln area."

Exposure to Particulate Matter pollution, or soot, is a well-known known cause for asthma. It can also make a child's asthma worse.

Proximity to the pollution from the three Midlothian cement plants was the only environmental factor geographically associated with higher concentrations of childhood asthma, ruling out poverty and indoor air pollution. There also wasn't a strong correlation to urban gas drilling, although the authors concede that "urban drilling may play a part as well" in the region's higher than normal child asthma rates, and there was no direct comparison between the geography of drilling activity and area asthma levels.

In 2009, Cook Children's Hospital released its Community-wide Children's Health Assessment and Planning Survey (CCHAPS), the largest examination of childhood health in North Texas ever undertaken. It found that Tarrant County and the western side of the North Texas region suffer childhood asthma rates significantly higher than state and national averages.

In "Conditions Associated with Childhood Asthma in North Texas," published in the October edition of ISRN Allergy, Newcomb and Cyr revisit the Cook study and delve more deeply into its data. "The purpose of this study was to identify significant associations between asthma diagnosis, comorbid conditions, and social problems in children." The complete article can be accessed on the Cook Hospital CCHAPS website page devoted to asthma, under "Special Reports."

Midlothian is the home of the largest concentration of cement plant manufacturing capacity in the United States. It hosts three large cement plants – TXI , Holcim and Ash Grove –  with a total of six kilns. They are the largest stationary sources of pollution in North Texas. Reports submitted by the plants themselves show they poured over a million pounds of Particulate Matter pollution into the North Texas air in 2009.

EPA recently announced that it was considering once again delaying the implementation of new federal emission rules, including stricter particulate matter pollution standards, from 2013 to 2015 that have been in the works for two decades. The delay would also water down proposed PM pollution standards. Schermbeck said Newcomb and Cyr's analysis shows the real world costs of such a rollback.

"It's a scientific fact, endorsed by EPA, that inhaling tiny bits of particulate matter can make people sick and even kill them. What this study makes clear is that the agency is senselessly condemning more Tarrant County kids to illness and suffering by delaying rules that were supposed to have been in place in the 1990's. It's time to start saving lives by reducing this kind of pollution."