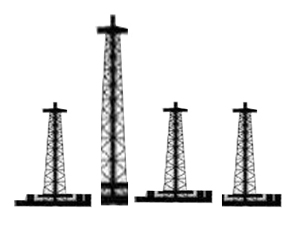 As its way of giving Denton residents an industrial size middle finger, the Denton Record Chronicle is reporting that Vantage Energy is preparing to begin fracking in the city on May 27th. The company's announcement came a day after Governor Abbott signed a new law prohibiting local governments from banning fracking, or, really, doing much of anything to hinder whatever the hell gas companies want to do in a city.

Usually, new laws take effect the following September 1st after a session, but the Governor and industry wanted to make sure they was no summer of doubt holding-up their smack down. Until yesterday, Denton city representatives were sounding prepared to continue defending their ban from industry court challenges, but the new law keeps them from being able to file preliminary injunctions to halt resumption of fracking itself.

Because the Vantage site sit on the edge of town and is more than 1200 feet from a "protected use," like a home,  the new activity is not a direct challenge to Denton's off-set regulations, or the ambiguous lynch-pin language of "commercially reasonable" driving the newly-signed legislation. And because the Vantage operation was under way when the city declared a year-long moratorium on new fracking in 2014, it could ask for, or assume it has, a hardship case under that local rule.

So only 200 days or so after it took effect the disassembling of Denton's fracking ban will begin. Because it can.

After it was clear the legislation would become law, most citizen observers expected such a demonstration of political spite by industry, although many were predicting it would be lead by Eagle Ridge's resumption of fracking in the original neighborhood by the UNT stadium that kicked off the entire controversy. This first baby-step back into town isn't quite so in-your-face, but it may be opening the doors.

What is the appropriate response by angry Denton residents to this news in the short term? Is it a picket line outside the site's fence? That would certainly attract media for a day but it wouldn't have much impact on the operators. Is it civil disobedience to stop the trucks from entering or leaving the site? That would get even more attention, but unless you have wave after wave of demonstrators lined-up and organized, this too seems like it's a temporary inconvenience rather than a real threat. On the other hand, if this is not the time and place to register your discontent by risking arrest, what does such a place and time look like?

There are lots of rumors about a court challenge to the new state legislation, but that will take years to play out in the courts, and remember, unless there's a constitutional challenge, they'll be Texas state courts, where the judges are all elected, not appointed.

The choices facing Denton residents are the same facing every other group of concerned fracktivists in the state right now – they're just facing them sooner. No option looks very satisfying. Most cities are cowering at the thought of enacting new off-sets or rules and taking on industry and running up millions in legal bills. Individual nuisance suits against operators offer some hope to the most extreme examples, but not necessarily to victims as a class. Legal challenges to the state law itself offer a very long maze of trials and rulings. Up to now, the way citizens have organized themselves has not been conducive to national relief and even if that weren't true you have an Administration relying on the fracking boom for much of its energy policy and so reluctant to crack down on it.  Incrementalism has never seemed so incremental.

New strategies are needed, but right now nobody can't see clearly what those will be. One thing you can count on however. When citizens are frustrated and angry over being shat on involuntarily, and you don't allow them to express that anger and frustration into what they believe to be meaningful mechanisms for change, you back them into a corner. Take away the reasonable options, and suddenly, the "unreasonable" ones are the only ones available and they have nothing left to lose in taking them. Just Google "Chinese parents + pollution" and see what kind of tactics you push people into pursuing when they don't have a system that responds to their real and present dangers.

Not many people remember the modern American anti-toxics movement was born with a hostage crisis.

Love Canal was a toxic dump for chemical waste used by the Hooker Chemical Company in the 1950s in Niagara Falls, New York. In the next 20 years two schools and 900 homes were built on or near Love Canal. A young housewife, Lois Gibbs, lived there, and led a precedent-setting fight against the federal government to get all the families relocated.

At one point in 1980 when EPA officials visited the community, Lois Gibbs and her group refused to let the officials leave until the federal government promised to relocate the families. That's right, the group held the EPA officials hostage.

"Yes, I say we detained them for their own protection! That’s actually what got us the relocation. EPA had come down and told us all the things we couldn’t do, and then said we had chromosome breakage, and chromosome breakage means that we have a higher risk of cancer, birth defects, and miscarriages. But the thing that really broke the…sort of the straw that broke the camel’s back was when they said it’s not just about the adults in the community, these chromosome breakages could be in your children, and people just panicked. And they all came to this front lawn of the abandoned house where we had our offices, and they’re all looking at me, it’s like, “Lois, what are we going to do?” and I’m thinking like, “My goodness, I’m going to be a target here because people are so angry.” So I called the EPA representatives to the house to explain to the larger group, what does this mean? And when they got there, people said, “you know what? If it’s so darn safe for us, it can be safe for you. And we’re going to hold you in this house until President Carter does the right thing”.

So they were in the house and 500 people literally encircled the house and sat down, so they couldn’t get out. But after a while, it got really rowdy out there, people were feeding off of one another and they were getting angry. The FBI said they were going to come in and they were going to take the hostages from us if we don’t let them go. So we gave the White House…we let them go, kept them for five hours, and we let them go and gave the White House an ultimatum. They had until Wednesday at noon to evacuate us, or the hostage holding as it was coined, would look like a Sesame Street picnic to what we would do Wednesday at noon. We had no plan for Wednesday at noon! We had no clue what was going to happen Wednesday at noon, but I didn’t go to jail, and in fact, one of my hostages sent me a telegram – which young people today may not know that is – but sent me a telegram that said, “I hope you win everything you guys are fighting for. Thank you for the oatmeal cookies. Your happy hostage, Frank.”

Without that incident, there would have been no government-ordered relocation of the families out of Love Canal and no federal Superfund law to facilitate the clean-up of future toxic sites, like the RSR lead smelter and the waste piles it left behind in West Dallas.
Should gas operators and TCEQ inspectors be looking into hiring body guards? They're probably safe for now. But when citizens legitimately fear for their children and property, and you don't give them the tools of a democracy to relieve that fear, you drive them to other means of getting their families out of harm's way. Maybe push will come to shove in Denton, or it will take a West-style catastrophe to draw the line, but somewhere, sometime, Texas citizens are going to let the government know that they're mad as hell and aren't going to take it anymore.
Posted in Air Quality, Citizen Action, Fracking, Gas, Natural Gas and tagged Denton, fracking, HB 40, Vantage Energy
Leave a comment