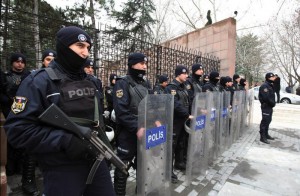 Events in Turkey remind us there's a direct connection between authoritarianism and pollution. Polluters depend on closed doors, opaque operations and a heavy hand – the same conditions that allow authoritarian governments to thrive. Because of ownership connections, supply contracts and employment pools, there's often no delineation between where government ends and industry begins – witness the 21st Century "Red Army Inc." in China, or the state-approved Russian Oligarchies.

Corruption is institutionalized in such places. Pollution is just another form of state-sponsored crime that's overlooked by everyone that matters. With one large exception. When the crime is padding payrolls or skimming profits, it's not worth the trouble of ordinary citizens to speak out. It's a matter between the Powerful.  But when the result of the crime is making your kids sick, or ruining your farm stock and land, then you have less to lose by fighting back.

And in a country run by an authoritarian government, what does fighting back mean? Well, it doesn't mean filing a complaint or going to court because those options are not allowed, or at least not allowed to be successful. Your options are very limited. That's why Chinese parents resort to kidnapping factory managers, and arson these days to protest new petrochemical plants. And it's one of the reasons why the events in Turkey took on a life of their own after being sparked by the brave stand of three people to save a park in Istanbul in the middle of the night.

One of the most serious misdiagnosis of the right is it's derision of everything "green" as the silly aspirations of white, middle-class youngsters with  too-much-time-on-their-hands. Environmental health is a fundamental "freedom" issue. Invasion of your lungs and intestines with adverse foreign substances is the ultimate eminent domain issue. It's trespassing. Parents want to protect their kids from poisons. People want to breathe clean air and drink clean water. They want to look at things besides offices buildings and feel something besides concrete beneath their feet. To be Free, to Enjoy Freedom, human beings have to experience Free places – Smog Free, Pollution-Free, Sprawl-Free. This was the Libertarian-influenced force behind early American conservation and park-building – as championed by stout GOPer Teddy Roosevelt.

Oddly enough, it turns out that yearning isn't confined to Young White People in America, or even America itself. It seems to be a universal yearning that people in every continent have been increasingly expressing. To fight for environmental justice in Authoritarian-run countries is to be a true "Freedom Fighter." But most of the Right is deaf to this. The very constituencies you'd think it'd be championing – Chinese peasants getting shat on by their communist-in-name-only state-industrial complex – get ignored.

Now, granted Texas isn't a Turkey or a China, but you don't have to live in another country to see authoritarianism seeping into, and affecting, the politics of pollution. Exhibit A: the secret agreement between out-going Dallas city Manager Mary Suhm and Trinity East that was kept from the public for five years, even as it drove the city's agenda on gas drilling. That's a pretty clear example of the state and industry teaming up to become a single entity that had its own separate agenda from the public one either presented, as well as how the system is perverted to fit the deal instead of the public good.

To a lesser extent, severely restricting public comments at public meetings and the over-reacting to obnoxious hecklers is also part of this same strain. The less transparency for the deal makers, the better. The heavier the hand in quelling dissent, the better.