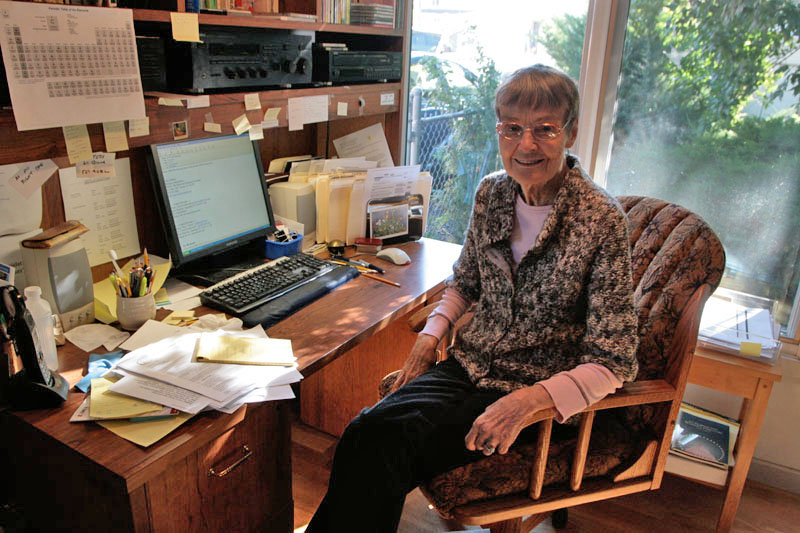 Sad news came on Sunday that Dr. Theo Colborn had died at the age of 87.

F. Scott Fitzgerald said there are no second acts in American lives, but he said that well before the woman's movement of the 1970's flourished and allowed an entire generation to experience one. Dr. Colborn's second act just happened to change the entire debate over environmental health.

Theo Colborn had already retired from her first occupation as a pharmacist, when at age 58, she decided to go back to school in 1985. She got a PhD in Zoology from the University of Wisconsin, with minors in epidemiology, toxicology and water chemistry. She told a PBS film crew that she wanted to get an education so that "maybe I could undo some of the things my generation basically foisted on society."

After school she began working on clean air issues in Washington DC but then went back to the Midwest to join a comprehensive study on the pollution affecting the Great Lakes. This gave her a chance to review emerging science from a more holistic viewpoint than a specific "reductionist" academic discipline or specialty. She was looking at an entire ecosystem. Although there was lots of new literature on the subject of how chemicals were impacting different species in the Great Lakes region, no one was pooling the research for evidence of possible trends, similarities and effects. She began to use the new tool of computer spreadsheets to do just that…for the very first time.

Her results surprised her and launched a new career that lasted right up until Sunday. What was doing the most harm to Great Lakes animals were not one-off catastrophic events like accidental pipe ruptures that dumped thousands of gallons of industrial poisons into the water, but the long-term, low-level assault by a variety of everyday synthetic chemicals. Their worlds were ending not with a bang, but a whimper.

Cancer was the big sexy health effect from pollution that everyone was looking for back then, but it was notoriously hard to prove a link between a polluting cause and a cancerous effect. Colborn's research discovered many more subtle, more insidious, impacts from pollution at levels which were officially "below regulatory concern" – first in the biology of animals, then in people.

Fetuses were particularly vulnerable to these impacts, which affected how hormones could change the shape and function of internal organs, reduce the ability of an animal to behave "normally" in its environment, harm the immune system's ability to respond to routine threats, even warp reproductive systems in gender-twisting ways that seemed to remake males into females and females into males. Such changes weren't necessarily fatal like cancer, but were being passed on from generation to generation until a species could no longer reproduce healthy versions of itself. The biological Xerox machine kept malfunctioning in small and large ways over time until the copies no longer looked like the originals. Because animals had shorter life cycles, you could see the effects of these changes add up much quicker than you could in humans, but Colborn had no doubt that similar effects were occurring within our own species as well.

This field of research was so new, it didn't even have a name.  In 1991, she and 20 other scientists investigating it gave it one – endocrine disruption. In 1995 she and three others wrote the founding document of this new science, the best-selling book, "Our Stolen Future" chronicling how everyday, ubiquitous man-made chemicals were impacting human development. Not since Rachel Carson's "Silent Spring" (another work by another woman who was thinking outside the box) had a single book so challenged the conventional ideas about pollution and its impact. It remains required reading for any environmental activist.

If you were doing field work around industrial pollution sites in the 1990's, as Downwinders at Risk was in Midlothian with its three cement plants, one of which was the largest burner of hazardous waste in the state of Texas, the book instantly connected the dots between what was coming out of the smokestacks and the strange health effects being reported by local citizens. It was the constant exposure to the toxic soup of dozens of contaminants that could be the explanation behind inexplicable birth defects of almost any animal population being breed near-by, as well as the heretofore unknown health effects among the plants' neighbors. Reading the book, one felt like you'd discovered the Rosetta Stone of environmental health.

Every article you've ever read about the possible dangers of the plastic packaging additive BPA, or declining sperm counts in males all over the world, or male fish behaving like female fish, can be traced back to Theo Coburn and her peers who founded the field of endocrine disruption. Subsequent science has linked pollution exposure to Parkinson's disease, autism and obesity. Her overarching point was that we are swimming in a sea of industrial chemicals without knowing very much at all about their effect to the human body. That thesis is being proved right almost weekly by scientists, some of whom were not even born when Colborn decided to embark on her second career.

Her lifetime spanned the maturity of the environmental movement itself, from conservation-minded tree hugging concerns to people-poisoning invasions of the body snatchers health effects. There's no imagining the contributions she could have made had she devoted the first part of her adult life to the cause, but the entire human race is a beneficiary of her decision not to stay a retired pharmacist. She did not go quietly into that good night. She turned the world upside down on her way out. R.I.P.