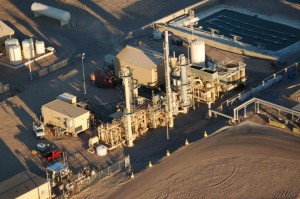 If you're already hosting the three or four largest single sources of air pollution in the entire region you need new large industrial sources of crap like a hole in the head. Likewise, if you've already violated the Clean Air Act for decades the last thing you need are new large sources of smog-producing pollution.  But that's exactly what's happening with the announcement last week that a new Liquified Natural Gas (LNG) plant is being proposed for Midlothian's Railport Industrial Park, located between Midlothian and Venus on Highway 67, directly below, and upwind, of the Dallas-Tarrant County line.

Applied Natural Gas Fuels (ANGF) put out a press release on March 21st that touted the purchase of 31 acres for a facility that would house "five liquefaction units, each able to produce 86,000 gallons of fuel daily, and total onsite storage of 1.5 million LNG gallons."

"In preparation of building the facility, which was announced last September, ANGF has purchase orders for all long-lead time items, such as storage tanks, production skids and electric motors and compressors, the company said.

The plant seeks to supply both road transportation and other off-road high-horsepower applications, such as rail, marine, mining, remote power generation and oilfield exploration/production (E&P) operations."

LNG plants take natural gas and cool it to minus 260 degrees F, at which point it becomes a liquid. This allows the industry to be able to store and move it compactly. It's been described as reducing the air out of a beach ball to shrink it to the size of a ping pong ball.  But it also greatly increases the chances of accidents. If there's a leak or spill from a tank or pipeline the LNG would convert back to a gas. As it diluted with air, the natural gas/air mixture could become potentially explosive if the concentration of natural gas in air reached between 4% and 17%. In this range, any source of ignition (cell phone, cigarette lighter, attic fan, light switch, auto or boat engine spark plug, carpet spark, etc.) could ignite a vapor cloud and impact a large area.

ANGF already operates an LNG plant in Topock, Arizona, only three miles on the other side of California's border – and tougher regulations. At the same time it's building its new facility in Texas, the company is also doubling the capacity of the Arizona plant. According to an online document about the company's current operations from the Southern California Air Pollution Control District,

"…the gas must be stripped of impurities until it's over 98% methane. Co2, H2S, other sulfur components, moisture, mercury, and particles are stripped via acid gas removal and disposal, gas dehydration, mercury removal, and particle filtration…. The emissions associated with these processes include CO, VOC, SOx, NOx, H2S, particulates, and many toxic organic compounds."

That's Carbon Monoxide, a poison everyone's familiar with, Volatile Organic Compounds, a smog-producing class of chemicals like Benzene and Toluene, many of which are also carcinogenic, Sulfur Dioxide, a respiratory irritant which also causes acid rain, Nitrogen Oxide, a smog-producing respiratory irritant, PM pollution that's been linked to everything from heart attacks to Parkinson's, Mercury, a notorious neurotoxin, and oh yes, Hydrogen Sulfide, or "sour gas," a highly toxic and flammable poison that causes pulmonary edema at low concentrations and death at high ones.

We don't have specific annual volumes of those pollutants for the Midlothian plant yet, and may never get them if the facility receives a standard permit with only an upper ceiling of emissions, but LNG plants use a lot of energy, and therefore have the potential to emit a lot of air pollution. It appears that the Midlothian plant will be burning natural gas for its power, including huge gas turbine compressors. At much larger LNG export plants proposed for the coasts, these compressors have been the subject of a lot of concern.  Last November, a Canadian wildlife conservation group released a report on a string of proposed LNG plants for British Columbia that estimated the facilities would be burning most of the gas used in the Province,

As a result of these kinds of concerns, the Canadian government committed to spending over a half million dollars on a study of how the gas industry will affect air quality in this part of British Columbia.

The Midlothian plant will be much smaller, put its impact on local and regional air quality could still be substantial depending on the design and technology. Industrial Hydrogen Sulfide and VOCs are not something you want wafting into your backyard, and anything that makes more smog is bad news for the entire DFW region.

Locating in Railport – itself a piece of heavy-metal contaminated ranch property bought and developed by TXI to prevent further liability issues – the LNG plant adds to the inventory of polluters that call Midlothian home. Three large cement plants, a steel mill, a gas power plant, and other smaller entities have made sure the city is the closest thing to a DFW Ship Channel that we have. Collectively, these facilities emit a kind of super plume of air pollution that spews north into the middle of the Metromess during most of the year. If you live anywhere from SW Dallas to NW Tarrant County, you're already breathing the pollution from Midlothian industry. How much the ANGF facility will add to that plume is not yet known, but any increase is going in the wrong direction. Stay tuned.