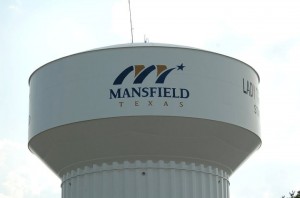 Ever since winning the Dallas Gas Wars in December of last year, Downwinders at Risk and our partners at the Texas Campaign for the Environment have been looking for a place and time to take the responsible drilling fight deeper into the Barnett Shale. We're glad to announce that we're teaming up with the newly formed Mansfield Gas Well Awareness group to do just that.

Mansfield is a relatively small Tarrant County town with a big gas industry presence. Sandwiched between Arlington and Fort Worth, it has a population of 59,000 spread over 36 square miles. it already has 200 wells on 51 gas pads with a total of 512 planned – or an average of 14 per square mile. Many of the most problematic wells are operated by Eagle Ridge – the same company whose antics single-handedly began the current "ban fracking" campaign in Denton. Like Denton, Eagle Ridge's Mansfield wells are close to homes, and have been known to spew surrounding neighborhoods with their own scrubbing bubbles concoction from flowback operations and incurred a rare violation notice from the state in February. The city also hosts a notorious Teas Energy Midstream compressor station that's a suspect in showering homes with an oily film from what was most likely from a messy blown down accident in May.

Those incidents got people's attention. Seeing themselves as the victims of a permissive "Fort Worth Model" of gas regulation, local residents are now moving to organize around a citizen-friendly "Dallas Model" with more protective setbacks, restrictions, and monitoring. As their new website and Facebook page notes, "Mansfield Gas Well Awareness is not a movement against natural gas or exploration of natural resources.  Rather, we are against the permitting of toxic gas well activities near homes, schools, day cares, and parks.  We are a movement of concerned residents that live in Mansfield who are for clean air, safe and healthy communities, and protecting peoples' rights to peacefully enjoy their property.﻿"

As is so often the case, pollution problems on the ground are connected to ethical problems at City Hall. Mansfield councilman  Stephan Lindsey, who until recently was Mayor Pro-Tem is Senior Director of Government and Community Affairs for Quicksilver Resources, "a Fort Worth natural gas and oil exploration company" who never feels compelled to recuse himself from any votes concerning the municipality's regulation of the gas industry. Councilman and New Mayor Pro-Tem Larry Broseh is owner and President of Cam Tech, a company "dedicated to providing the drilling industry qulity pipe handling equipment," and also doesn't mind using his public office to vote on behalf of his industry interests. That means almost a third of the seven member Mansfield city council has professional gas industry ties.

As it happens, Mr. Lindsey is up for re-election next May. Old timers might recall that the Dallas drilling fight got real traction when gas friendly incumbent city council member Dave Neumann was upset by newcomer Scott Griggs way back in 2011. Although the new group hasn't officially targeted Lindsey, defeating him with a candidate more skeptical of industry claims would certainly send a strong message that Mansfield residents don't want the fox guarding their chicken coops.

The good news is that Mansfield Mayor David Cook took MGA members up on their invitation to see the Downwinders' presentation to the regional air quality meeting in Arlington on June 16th, where Director Jim Schermbeck devoted half of his time to explaining why gas compressors should be electrified. As far as we know, Cook was the only DFW are Mayor in attendance and it was a real coup for the young group to get him there.

MGWA's website already has some amazing pics and videos, as well as depressing factoids to share. If you know someone living in Mansfield, please let them know a new voice for citizens concern in on the scene and organizing to clean up the current messes as well as prevent new ones. Now that Downwinders has joined the fight, we'll certainly keep you posted on developments as well. Westward ho!