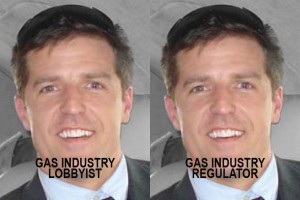 Stephen Linsdey is an entrenched member of the oil and gas industry. In the mid-Oughts he worked for Flowserv, the multinational manufacturer of valves and pumps used at thousands of oil and gas facilities worldwide. From 2007 to 2008 he was put in charge of protecting and developing Iraqi oil fields during the Iraq War. Beginning in 2008, just as the local Shale boom was taking off, he went to work for Quicksilver Resources inc, the sixth largest producer in the Fort Worth Basin, where he's been ever since, serving as Senior Director Of Government Relations and Community Affairs.

Lindsey's job is to smooth over any regulatory obstacles in the way of Quicksilver's production goals. He's the company's lead negotiator with local and state governments. He also is in great demand on the oil and gas industry speaker circuit as an expert on how to deal with what he says are those "working against industry's interest."

In his own words, "My role in my organization is to make insure the guys that want to drill wells and complete wells, and run pipelines, and put in surface equipment, and move trucks can do it uninhibited. Can do it without fear their permits are gonna get denied, or the regulatory structure is going to come down on them."

That's his day job. But Stephen Lindsey is also a Mansfield City Council member. In fact, as coincidence would have it, he's the city council member the Mayor has put in charge of overseeing the city's gas drilling policies.

And now, he's the city's go-to guy for the re-examination of Mansfield's obsolete 2008 gas drilling ordinance that's been the subject of a steady grassroots campaign of determined residents. You got a problem with that?

As it turns out, Lindsey isn't even the only member of the Mansfield city council who's intimately connected to the oil and gas industry. Larry Broseh is president of a drilling parts manufacturer whose clients include gas patch operators all over the state, including the Barnett Shale. That's two out of the seven city council members who have a pretty big conflict of interest.

But it's not just who Lindsey works for that makes for the outrageous double duty. It's what he does for Quicksilver. He's the slick PR guy that interfaces with local city councils to downplay the hazards of fracking in order to win permits. He's the spokesperson in the media. If Quicksilver had wells in Mansfield (the closest ones are in Arlington), the council would be sitting across the table from Stephan Lindsey. And as a national poster boy for fracking's public relations strategies, he's often the friendly face of the industry across the country. He's certainly fracking's most high profile elected official in the Barnett. And he wants you to know he's sincere about trying to get "the best product" i.e the best conciliatory agreements between industry and government.

With only 60,000 residents, but over 200 wells and another 300 potential ones to come, Mansfield has twice as many wells per capita than Denton and almost a third more per capita than even Fort Worth. Residents there are pressing to replace an industry-blessed "Fort Worth model" 600-foot setback (that's really a 300 setback with variances) with a "Southlake/Dallas model" 1500-foot setback minus any variances. Outside of Denton, now in court over an outright ban on fracking, Mansfield is the next battleground in the Barnett Shale for the clash between these two competing regulatory templates.

Lindsey is well aware of this clash. Part of his job is going around the country warning industry about the growing power of local governments in regulating drilling. He cites Flower Mound and Denton as bad examples.  As one industry conference panel moderator posed it to Lindsey, "What's your advice on how to prevent a Denton?"

According to Lindsey, "local governments are increasingly at odds with state government." Cities don't feel as if they're protected by state entities like the Railroad Commission or TCEQ anymore. "Detrimental regulations" by municipal governments are on the rise. When older white Republicans are opposed to you, "that's a sea change."

Much to Lindsey's chagrin, unlike Colorado, where the Attorney General has taken local county governments to court because of this overreach, Texas home rule cities "can do whatever they want." If the cities think it's in their best interests, those regs "are going to stand" unless they're challenged. You can almost taste the anticipation he has over the lawsuits the Denton fracking vote has generated as a chance to settle the score and cut the cities down to size.

In his presentations to industry peers, Lindsey boosts about his role as a Mansfield city council member. "I'm on both sides of it. I'm out lobbying, er, presenting at City of Fort Worth, City of Arlington, City of Haslet, City of Southlake, City of Northlake –  all of our operational areas, trying to get our permits approved and on the other hand, I'm sitting on our own city council listening as XTO, and Chesapeake, and other operators come in and present there."

Traditionally, the strictest interpretations of conflict of interest have meant that the elected official or a close relative had to have worked for or owned stock or or percentage in the specific company being discussed. Since Quicksilver doesn't have any wells in Mansfield, Lindsey passes that test. But in terms of a more general conflict over the escalation of local regulation of the gas industry, his positon in Quicksilver and as an industry spokesperson certainly does pose a conflict.

He doesn't hesitate to describe threats to the industry as a whole, or to advise other companies on how to "manage them."  No matter how much more protective to public health it might be, wouldn't the spread of a Dallas-like model of "detrimental" regulation of drilling to a place like Mansfield be a bad precedent for the industry as a whole? Wouldn't it constitute a threat to other operators like Quicksilver, whose own future wells might be targeted next in Arlington, or Haslet, or God forbid, even Fort Worth?

If he was being honest, Stephen Lindsey the industry lobbyist would have to say yes. After all, as he noted to a Colorado reporter in an article over a local County's demand for a monitoring water well Quicksilver didn't want to install, "We’ve got to make prudent decisions about what option is best for the company."

In 2010, the City of Fort Worth Ethics Committee ruled that three gas company employees had a conflict of interest in serving on its air quality study committee by concluding, "The level of their loyalty to their employers has put them in a position of wearing two hats."

The same is true of Stephen Lindsey. Mansfield residents shouldn't have to guess which hat Lindsey is wearing when he's working as a city council member, or whether he's putting their well-being or the industry's bottom line first.

(Most of the quotes used in this post come from a presentation for the American Business Confernce in October, avaialble for viewing online: http://vimeopro.com/lbcg/fe14/video/108496562)