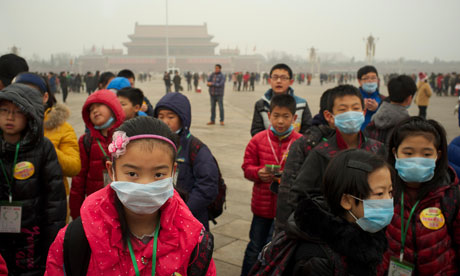 Every once in a while, even now, in the midst of our electronic surroundsound calliope, popular culture can freeze on a moment of some social significance that strikes a collective nerve.  For the US this summer it was Ferguson, Missouri. For China, it might just be this last weekend's debut of a documentary about the horrible air pollution that envelopes life in much of that country.

"Under the Dome" is the video manifesto of a Chai Jing, a former Chinese television reporter who didn't give much thought to the brown haze she was breathing, until she was breathing for two.

"Back then, she says, she paid little attention to the smog engulfing much of China and affecting 600 million people, even as her work took her to places where the air was acrid with fumes and dust.

“But,” Ms. Chai says with a pause, “when I returned to Beijing, I learned that I was pregnant."

“I’d never felt afraid of pollution before, and never wore a mask no matter where,” Ms. Chai, 39, says in the video. “But when you carry a life in you, what she breathes, eats and drinks are all your responsibility, and then you feel the fear.”

Her film was posted online Saturday and within just a news cycle or two caused such an uproar and reaction that China's minister of environmental protection compared it to Rachel Carson's “Silent Spring,” the landmark exposé of chemical pollution published in the early 1960's that led to the banning of DDT in the United States. By Sunday afternoon, over 25,000 comments from Chinese citizens had been left at her website, including ones like this that any frustrated downwinder can relate to: “In this messed-up country that’s devoid of law, cold-hearted, numb and arrogant, (her film) is  like an eye-grabbing sign that shocks the soul.”

Jing's approach to the material is partly responsible. This isn't a detached observational third-person narrative of the problem. It's her own memoir that uses science and investigative reporting as tools to explore the links between her daughter's benign tumor and the dirty air she believes might have caused it, and so many other health problems. It;s a personal story she probably ould not have told as a member of the official Chinese television news network where she was employed for many years.

We've noted for some time that the most radical environmentalists on the planet aren't Earth Firsters in Colorado, or Greenpeace activists in Europe, but angry Chinese parents, who, over the last decade, have kidnapped the managers of polluting facilities and destroyed whole chemical plants suspected of causing widespread health problems in villages. Undistracted by a mind-numbing, soul-killing regulatory regime like the Texas Commission on Environmental Quality that offers a veneer of control, there's no bureaucratic weapons available to most Chinese citizens when they're being shat on by industry. You either accept it or you don't. Increasingly, when it comes to the harm being imposed on their children, many don't. Especially the mothers.

Take a look at the membership of any front line environmental group. It's populated and administered mostly by women. It was women like Rachel Carson who took on the patriarchy of "modern science" to begin the discussion on environmental health. It was Los Angeles moms in the 1950's who organized the first anti-smog groups and began the modern fight for cleaner air. It was Lois Gibbs, the mother, at Love Canal who committed her own act of kidnapping when she found out her house was built on top of a toxic waste dump. It's women who lead the anti-fracking groups around the country today and here in the Barnett Shale. It's women who founded and make up 90% of Downwinders' board.

Environmental activism may be one of the purest forms of modern feminism there is, both in content and organization. And it's a woman, a mother, who may have once again held up a mirror to a culture, one that hosts a full 6th of the world's population, and asked what the hell are we doing to our species by exposing ourselves to so many obvious poisons.