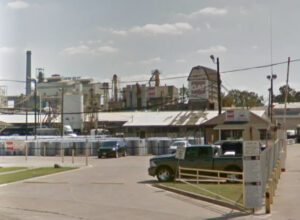 “GAF is the new RSR.”
Alliance Says West Dallas Polluter is Operating Illegally and Poisoning Residents…Just Like Infamous Lead Smelter.  And They Want it Gone.

(Dallas)– In a stunning replay of West Dallas environmental justice history, a new alliance of
groups says the largest polluter in West Dallas lacks required City of Dallas documents to operate, and could be in potential violation of federal air pollution standards. It’s the same circumstances that forced the former RSR lead smelter, once also located on Singleton Boulevard, to close in the 1980’s.

“GAF is the new RSR” said Raul Reyes, President of neighborhood group West Dallas 1, and spokesperson for the new coalition of allies, “This factory is operating illegally, lacks basic pollution controls, and is too dirty to be doing business in West Dallas neighborhoods. And just like RSR, it should be closed.” 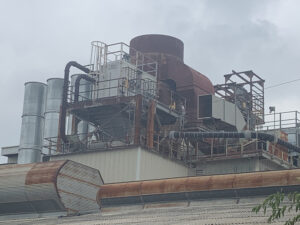 GAF has operated its West Dallas asphalt shingle factory for so long a lot of its pollution is “grandfathered” – unfiltered by any modern controls like “scrubbers” despite that technology being capable of removing up to 99% of sulphur dioxide emissions. In the last EPA inventory available from 2019, it was listed as Dallas County’s third largest air polluter with over 260 tons being spewed from GAF into surrounding neighborhoods that year alone. That includes 125 tons of Sulfur Dioxide pollution – more than any other facility in Dallas.

For years, surrounding residents and workers have reported sulfur-like rotten egg odors in the Singleton corridor around GAF, leaving them with headaches and nausea. But it’s the tiny pieces of soot being emitted from the facility that could get the company in trouble with the EPA. Using off-the-shelf Purple Air monitors for Particulate Matter, West Dallas residents independently monitored PM pollution around the GAF plant over the past two years. Results show levels of air pollution that likely violate both the 24-hour and annual national standards for PM 2.5 microns or smaller. If official EPA monitoring confirms the violations, the part of West Dallas around GAF, which hosts many other industrial polluters that are likely contributing to this pollution, could be declared a “non-attainment area” for PM pollution. GAF and other West Dallas PM polluters would have to submit a plan to decrease their emissions and new industries would be subject to stricter limits. RSR was also violating air pollution standards when the City of Dallas began to seek its closure in the late 1970’s.

Just like lead scientists believe there’s no “safe level” of exposure to PM pollution. A violation of its national ambient air standard is a dangerous condition that can leave lasting health harm among the hundreds of residents who live next to GAF, especially children.

Reviewing the results from the GAF monitoring, Dr. Natalie Johnson, a faculty member of Texas A&M’s School of 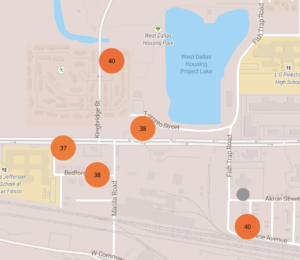 Public Health specializing in respiratory toxicology and environmental health warned, “If verified by EPA, these numbers are concerning. Exposure to levels over the EPA regulatory limits can lead to chronic diseases, such as heart disease, stroke, and premature death. The immune system, reproductive system, and developmental functions can also be harmed. The elderly, children, and infants are particularly vulnerable.”

Janie Cisneros, who lives with her family just feet from GAF’s fence line and hosted one of the monitors said “I grew up on Bedford Street and GAF was always a big presence. Now that I moved back to raise my own family, I see how disgusting and unhealthy the air is. It often keeps me from playing with my daughter outside.”

This is the first time in Texas that new low-cost hyperlocal air monitoring by residents has revealed potential violations of a national air pollution standard. Despite years of complaints, there are no City of Dallas, State, or EPA monitors near GAF.

At the same moment GAF is being accused of creating hazardous levels of air pollution, a research of City Hall documents by staffers for the Southern Dallas Neighborhood Self Defense Project revealed that GAF doesn’t have a current Certificate of Occupancy or the Special Use Permit (SUP) from the City of Dallas it needs to be operating at the site.

The RSR smelter also never operated with the SUP it was required to obtain. More recently, the six-story dumping ground for the asphalt shingles that GAF and others produce, that became Shingle Mountain in Southern Dallas, was illegal from the first day it operated because it also lacked a required SUP and Certificate of Occupancy.

Armed with this new information, West Dallas residents notified the City of Dallas about GAF’s illegal status. WD1 representatives have been told the research is correct and the City is now investigating. Without the Special Use Permit, GAF’s shingle-making is a “non-conforming” use and the City could initiate the same proceedings it used to eventually close RSR. 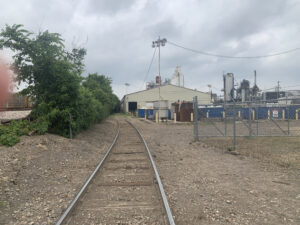 This dramatic news about GAF’s legal status and pollution levels comes precisely at the moment the company is applying for a renewal of its “Title V” operating permit from the State and EPA. Usually a mundane regulatory rubber-stamping, this process now has the potential to substantially add to the company’s headaches.

After months of requests by West Dallas 1 and elected officials, the Texas Commission on Environmental Quality (TCEQ) will be holding a virtual public hearing on the permit on July 29th at 7 pm.

Residents and others who want to ask questions or provide comments during the hearing may access the webcast by following this link:

https://www.gotomeeting.com/webinar/join-webinar
and entering 192-616-739 along with your email address or may call (512) 239-1201 at least one
day prior to the hearing for assistance in accessing the hearing and participating telephonically.

Members of the public who wish to only listen to the hearing may call, toll free, (415) 655-0060 and enter access code 569-744-316.TCEQ staff is recommending that you join and register at least 15 minutes before the hearing begins. A copy of the permit application can be viewed at the Dallas West Branch Library (2332 Singleton Boulevard). General complaints can be submitted in writing up to the hearing date to the TCEQ here:
https://www.tceq.texas.gov/assets/public/compliance/monops/complaints/complaints.html   and objections to the permit renewal can be submitted here:      http://www14.tceq.texas.gov/epic/eComment/.

Besides WD1, the groups lining-up to oppose the federal permit renewal are a combination of Dallas environmentalists, neighborhood associations, and social justice organizations, including Dallas Sierra Club, Downwinders at Risk, Public Citizen, and Southern Sector Rising.

After a review by TCEQ GAF’s permit renewal then heads to the Biden Administration’s EPA, which has pledged to work with communities of Color to reverse the kind of environmental racism the groups claim GAF is guilty of practicing.

“No permits. The wrong zoning. Dangerous levels of air pollution. Right in the middle of Black and Brown neighborhoods. Tell me how this ISN’T a repeat of the environmental racism West Dallas has been fighting for decades,” said Reyes. “We expect the Biden Administration to make good on its promise to end this kind of unacceptable discrimination.”