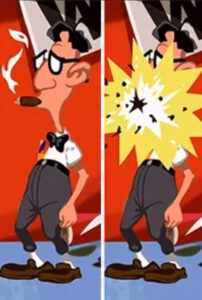 Dallas City Hall Staff has once again lit an exploding cigar. You know the ones you see in cartoons? An unsuspecting fellow strikes a match to what looks like a normal cigar…and then BAM! Powder burns and singed hair.

This new cigar is being smoked by Staff as if nothing was wrong, but the fuse is already lit. It’s just a matter of time.

Unlike previous Staff-manufactured exploding cigars this one isn’t a project, it’s a process. That makes it an even more insidious threat to Dallas neighborhoods than past exploding cigars sold under the brand names of “Trinity Tollroad,” “Treeless Golf Courses,” and “Gas Drilling in Parks.”

Those were one-offs that affected specific neighborhoods or sections of Dallas. This loaded stogy challenges EVERY neighborhood in EVERY part of town.

This cigar still lacks a catchy battle cry moniker – “Neighborhood Planning Process” is a mouthful and not very descriptive. But the issue is basically self-determination and local control. City Planning Department Staff, led by Director Peer Chacko, are saying Dallas residents can’t be trusted to plot the future of where they live. Chacko and Company have therefore selflessly suggested Staff should take on this task, even if they’ve never set foot in most of the neighborhoods whose fates they’re deciding.

To give themselves veto power over residents, Staff threw away a process where residents had the final say and substituted a new one that doesn’t give residents’ plans any path for Council adoption. Only the Staff-led ones have a chance. “We had to destroy the planning process in order to save it” echos an approach you might remember from more exotic and tragic national exploding cigars of the past 50 years.

Another Bad Sign: Staff invented the need for this new anti-resident planning 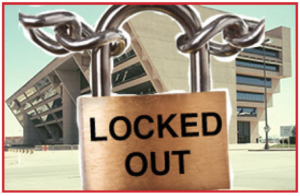 process out of thin air. It wasn’t mandated by a vote from the the City Council. There was no public pressure. No “blue ribbon” panel suggested it. There was no reason to change anything…until there was. Just light that Big Boy up!

Is the timing suspiciously racist? Yes it is. After letting a couple of predominantly white North Dallas neighborhoods construct and pass their own plans under the previous system with nary a hint of dissatisfaction, Staff pulled the plug only when Southern Dallas neighborhoods began using it to roll back racist industrial zoning. They might as well have just said, “We certainly didn’t mean for THIS to happen.”

Moreover, Staff believes they don’t need the Council’s permission to trash the neighborhood planning process and replace it with something else they just made up on their own. They’re not asking. They’re telling.

In other words, this is one really big, in-your face, Freudian-inducing, gun powder-packed presumptuous cigar.

Which is why Dallas neighborhood advocates across the city should be rooting for Jaynie Schultz and Paul Ridley to win their run-offs in D11 and D14. When it comes to these kinds of threats, they’re the Bomb Squad of Dallas City Hall exploding cigars.

Both are former Plan Commissioners who have lots of experience running across the room with scissors in the nick of time to cut the burning ends off these things before they can detonate. 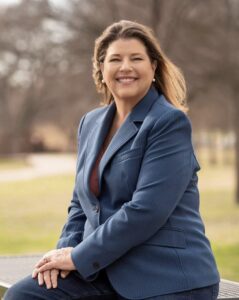 well, Schultz is a major reason there are not now at least four more batch plants in Joppa and nearby Flora Farms. She understands why Flora Farms residents want to rescue their neighborhood from decades of racist zoning. She’s taken on Staff directly and wrangled eight or more votes to deny permits to Southern Dallas polluters that they had no problem allowing. She knows the language of urban planning as well as the process. Her BS antennae are very long and she knows how to win. 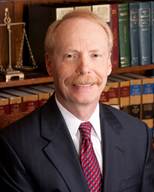 If you like seeing Dallas parks and the Trinity River without any drilling rigs on or near them, you can thank Paul Ridley. That such rigs would be showing up was already a “done deal” according to then-Mayor Mike Rawlings. As a Plan Commissioner during the Dallas Gas Wars Ridley played a critical role in forcing the truth out of Staff and industry so that what looked  like a Plan Commission endorsement became a total rebuke that Council then followed. He also speaks Planning, has long BS antennae, and knows how to assemble a winning coalition.

Dallas residents need them both in office in order to lead a freshly-inaugurated City Council to a vote to undo this done deal, before it undoes them.

Residents are complaining of a top-down, Staff-led process that excludes many neighborhoods 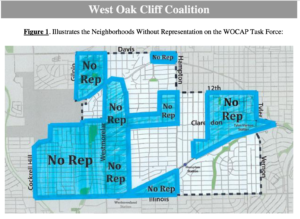 in the large “area” boundary Staff has drawn. They say they aren’t being represented, and the City’s outreach effort is poor to non-existent when it comes to information in Spanish. They also object to the prohibition on adopting their own neighborhood-led plan.  A new neighborhood association just formed. The West Oak Cliff Coalition’s first goal is to stop the Planning Department from using its new neighborhood planning process on their neighborhoods. The Coalition’s leadership sent a letter asking West to back their demands. As of this writing, no word from West.

If this is the reaction from previously unorganized neighborhoods in Oak Cliff, imagine the outcry when the full scope of the Staff’s changes become common knowledge among hardcore neighborhood advocates in East Dallas, White Rock Lake, or Lake Highlands. The opportunity for effective city wide organizing is not going unnoticed. It’s all headed for a showdown at the Horseshoe. We just need to make sure Schultz and Ridley are sitting there, scissors in hand, as part of the welcoming committee.

So no matter where you live in Dallas, please help Jaynie Schultz and Paul Ridley out this Saturday – with money, with labor, with a call to friends who live in their districts. The neighborhood you save may be your own. The Bat Signal is on. We’re at DEFCON 1. Dallas needs its Bomb Squad back on duty again.