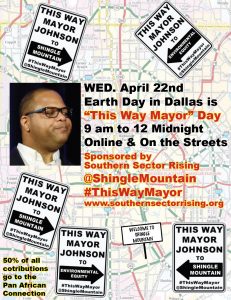 Connecting COVID to People of Color, 200 Street Signs Posted, Searchlights turned on to Show Mayor the Way to Shingle Mountain and Real “Equity”

(Dallas) – A local group is using the 50th anniversary of Earth Day to chide Dallas Mayor Eric Johnson for what it says is his disregard for Southern Dallas’ “pre-existing conditions,” including the on-going public health threat of Shingle Mountain, the City’s largest illegal dump.

“We’re giving the Mayor the benefit of the doubt,” said Allen McGill, Co-Chair of Southern Sector Rising, a group borne out of the Shingle Mountain fight. “We’re assuming he hasn’t visited or said anything because he’s having trouble finding the place. We’re going to help him.” 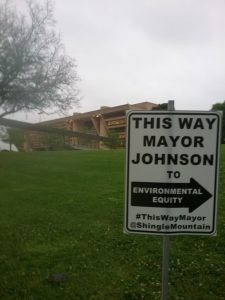 In addition, four-foot high block letters spell out “WE CANT BREATHE” from the summit of Shingle Mountain itself and two giant portraits of the Mayor have been glued to the gates of the site to help get his attention. Beginning at 8 pm tonight four giant searchlights will be turned on at Shingle Mountain to help guide him should he want to make the trip after dark.

All of this will be logged online in real time during the day at the group’s social media pages, including a Facebook event page where you can sponsor a “THIS WAY MAYOR JOHNSON” sign for your own residence or business and post “sign selfies.” Although the effort is tongue-in-cheek, McGill said organizers are deadly serious about pointing out Johnson’s inattention to the fundamental inequalities symbolized by the 100,00 ton, six-story high Shingle Mountain, now in its third year of posing an on-going public threat to adjacent residents.

Organizers say despite being invited and his administration’s adoption of “equity” as a governing principle, Mayor Johnson has never visited Shingle Mountain, never spoken publicly about it, and never addressed city government failures that allowed it to happen. They say he’s refused to order air monitoring for the site,  refused to declare it a public health emergency, or waive the city’s landfill fees to help dispose of the waste. They see the City working to get money from bankrupt operators in court, but not protecting residents’ health and property rights in Southern Dallas. “Mayor Johnson’s and City Hall’s priorities are backwards” said McGill. 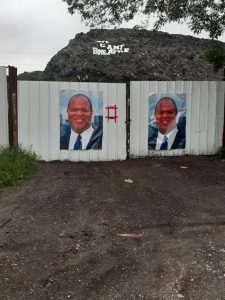 “ Racism created a set of “pre-existing conditions” that puts Black and Brown populations at a disadvantage before they even leave their homes. We hear a lot of rhetoric about “equity” from Mayor Johnson. We don’t see him trying to bring it to places like Shingle Mountain.”

A University of Texas Health Sciences Center map published in Mid-April shows the great majority of zip codes hosting 1-3 major risk factors for spread of the COVID virus are located in Southern Dallas, including the one Shingle Mountain is in.

An early April study from the Harvard School of Public Health found a connection between small increases in Particulate Matter (PM) air pollution and sharp increases in COVID mortality rates. Even a tiny increase in this type of air pollution can trigger a 20% increase in virus fatalities. Southern Dallas has been a battleground of fights against PM polluters, including four proposed batch plant permits in the last two years. Two of Dallas’ largest PM air polluters, the TAMKO and GAF asphalt shingle plants, are located in the middle of residential neighborhoods in Joppa and West Dallas respectively.  Most of the City’s heavy industry is in Southern Dallas and the Trinity River floodplain.

McGill and Hirsi both dismissed the idea that the pointed challenge to the Mayor was unfair under the current circumstances. “COVID makes our actions today even more relevant and important,” said McGill. “If you don’t eliminate the Shingle Mountains, you can’t eliminate the slower-moving public health disasters, much less opportunistic pandemics. The Mayor must show some leadership.” 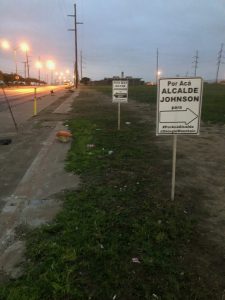 Southern Sector Rising is donating half of whatever it raises through its street sign sponsorships on Wednesday to The Pan African Connection bookstore and community center. Since 1989, Pan African has supported Black businesses and become a cultural and community crossroads in Southern Dallas. McGill called it a “grassroots institution that’s very important to Black Dallas and Dallas as a whole.”

Hirsi was careful to explain the protesters all observed social distancing and group meeting guidelines implemented by state and local governments in planning and executing the action. For her, overcoming these logistical obstacles to pull off the most spectacular local Earth Day action in years makes the protest even more remarkable. “Because of the restrictions on movement, a lot of organizations are sponsoring digital-only Earth Day events. We wanted to do something more memorable no one expected on behalf of people who need their voices heard right now. We think we succeeded.”