Monitors are being assembled.

Software is being written.

Downwinders is helping build the region’s 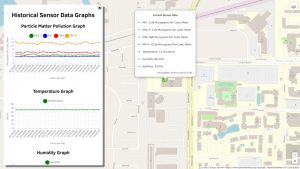 The first images from the mapping app UTD students are building for the new SharedAirDFW Air Quality Monitoring Network. Here data is being received by monitors already installed on the UTD campus. Residents will be able not only to see current conditions but levels over the last 24 hours or more.

One of the over 100 new SharedAirDFW air quality monitors being built in the UTD laboratory that will be distributed throughout DFW, including Joppa, West Dallas, Southern Dallas, and Midlothian. 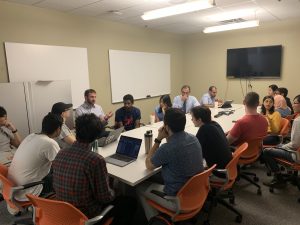 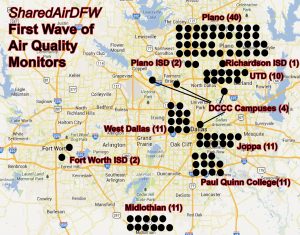 By this time next year the Network plans on having over its first 100 air quality monitors distributed throughout DFW, including the “front line” communities of Joppa, West Dallas, Southern Dallas and Midlothian.

It’s taken years of work and a lot of patience but with any luck a new citizen-friendly regional air monitoring network will debut in 2020.

Under the working title of “SharedAirDFW” over 100 new custom-built air quality monitors are being distributed throughout the DFW region in the next 12 months that will be able to give residents real time information about the air they breathe for the first time. When it’s up and running, it’ll be the first network of its kind in Texas and one of the largest in the U.S.

Based out of the University of Texas at Dallas laboratories and fueled by its graduate students, as well as Downwinders’ grant monies, these monitors will offer real time information through a easily accessible app.

Right now a handful of official EPA monitors provide air quality readings up to one or two hours behind real time conditions. SharedAirDFW willl increase the number of calibrated air quality monitors in DFW by a factor of four while giving readings updated every few seconds.

Almost half of the new monitors are going to front line communities in the DFW area: 33 monitors purchased by Downwinders are going to Joppa, West Dallas, and Midlothian, while another 11 purchased by Paul Quinn College are slated for the Southern Dallas neighborhoods surrounding its campus.

Joppa residents will get a preview of the system at a December 5th community roll out involving UT researchers, Habitat for Humanity, Paul Quinn, and local elected officials. Community events in Midlothian and West Dallas will follow.

This is one of the most important projects Downwiders has helped birth in its 25 year history. We’ll be bringing you updates as we get closer to bringing the whole system online. Thanks for you support.