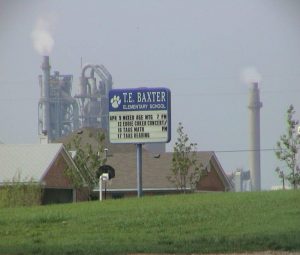 Increases Predicted in Air Pollution, including 100 more tons of PM a Year

Holcim Cement’s Midlothian cement plant has requested a permit application to the Texas Commission on Environmental Quality to release an additional 2700 tons per year of Carbon Monoxide and burn 100% Petroleum Coke in its Kiln #2. Holcim estimates these change will set of federally-mandated reviews for increases in emissions of Particulate Matter (PM), Nitrogen Oxide (NOx), Sulfur Dioxide (SOx), and Carbon Monoxide (CO). 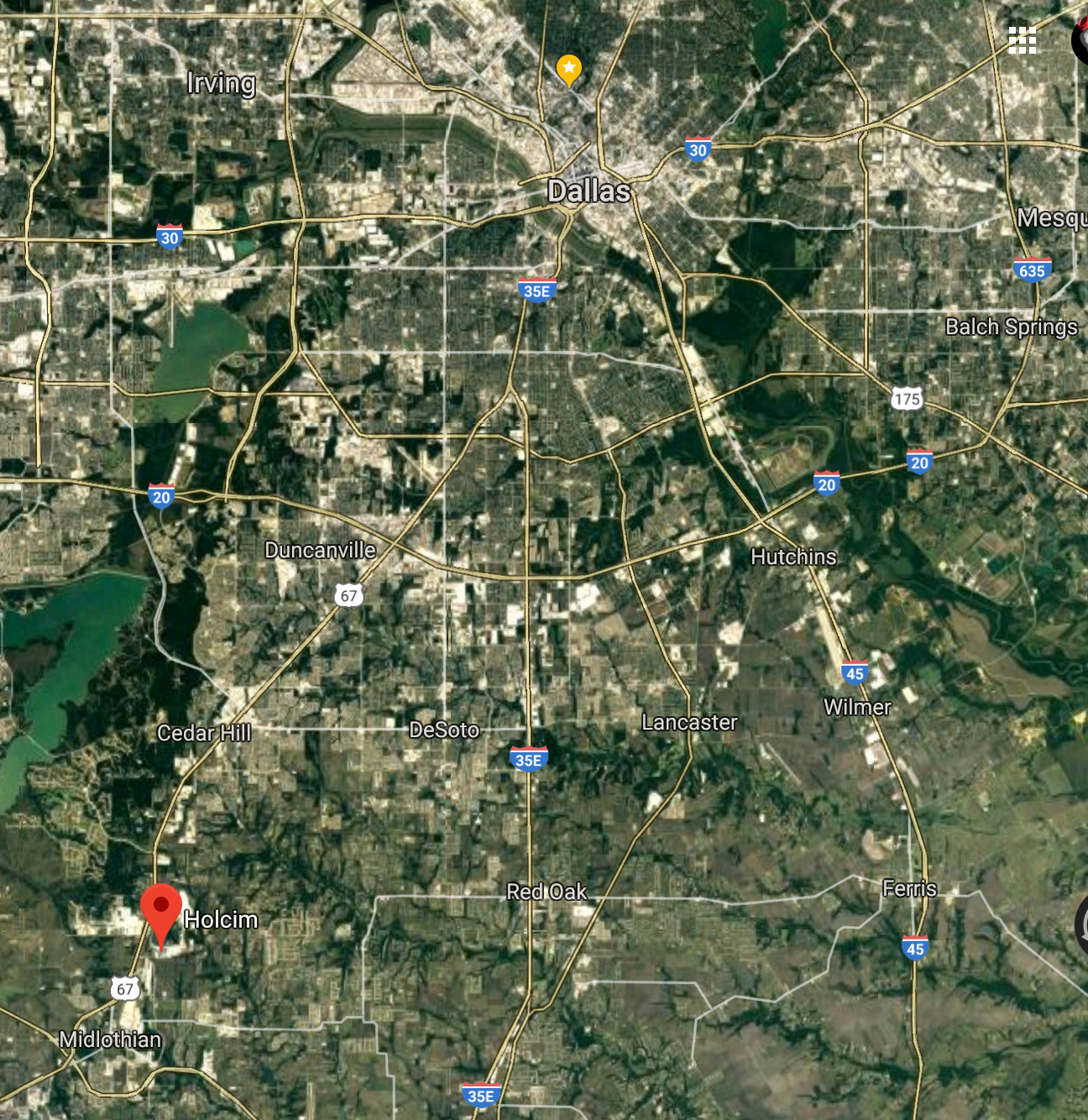 Holcim is one of three very large cement plants doing business just south of I-20 in Midlothian in what is the largest concentration of cement manufacturing in the U.S. The other two are TXI and Ash Grove. These are not batch plants. These are where the batch plants get their product.  With annual air pollution emissions in the thousands of tons, any one of these kilns would easily be the largest “stationary” industrial source of air pollution in North Texas. Combined, they represent a mega source of air pollution for DFW.

Review of the numbers in the permit application show the company wants to scrap its current limit of a little over 4000 tons a year for Carbon Monoxide and replace it with a higher 7112 ton per year ceiling. In addition, the difference between actual emissions and proposed changes could result in 100 tons more of Particulate Matter, 260 more tons of smog-forming Nitrogen Oxide, and 1700 additional tons of Sulfur Dioxide. 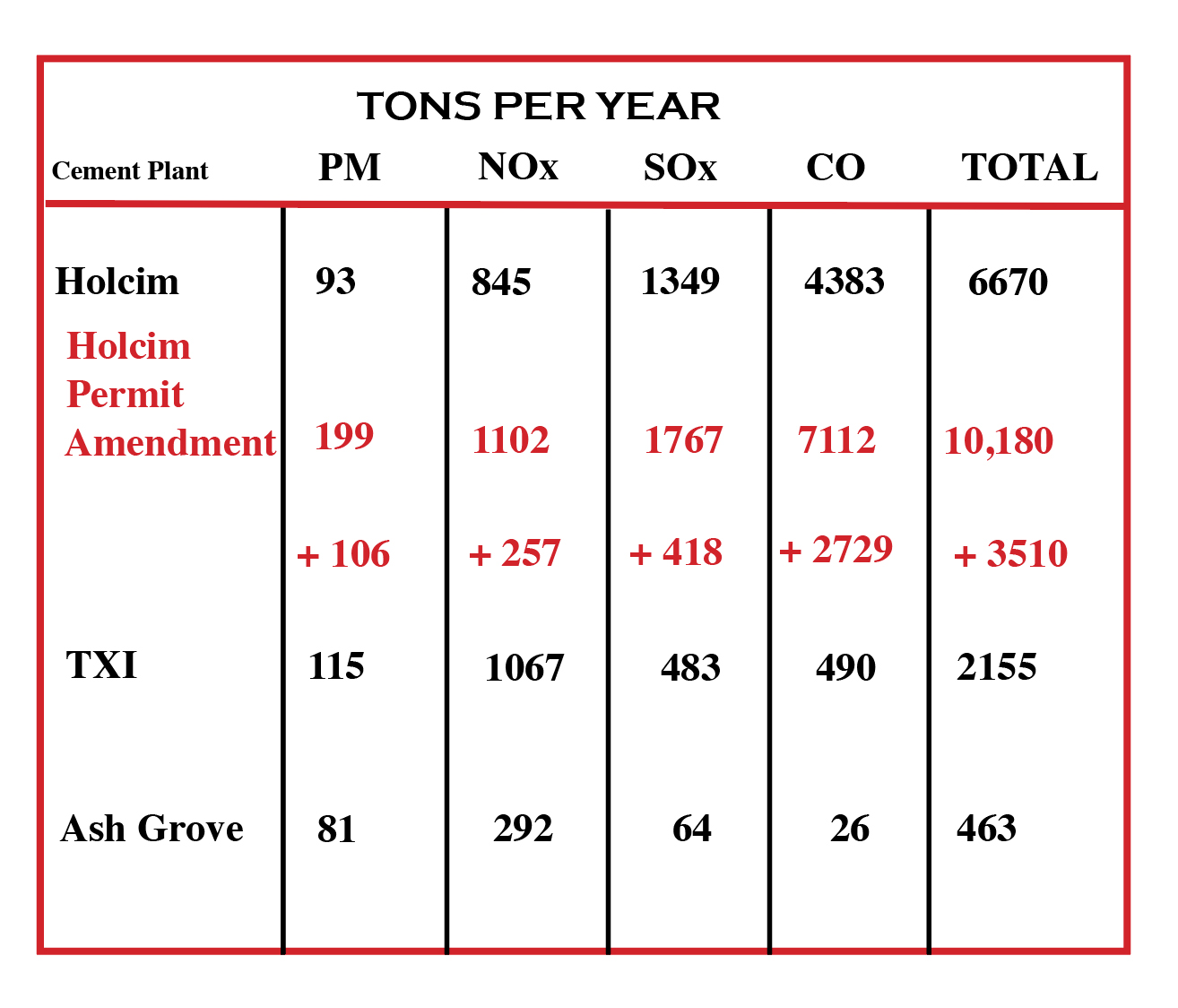 Missing from the permit analysis is the impact of the changes on CO2 climate crisis pollution. Petroleum Coke is nothing but carbon. It releases a lot of CO2 when burned. Burning 100% Petroleum Coke at Holcim will significantly increase this kind of air pollution. Cement plants are already a huge source of CO2 worldwide and Texas leads the country in CO2 pollution.

Overall, it’s the largest requested air pollution increase from any of the three Midlothian kilns in a very long time. And it reveals how badly the snake-bit  20th Century Holcim plant is aging.

Holcim’s current air pollution levels are already way out of sync with the other two, newer cement plants in Midlothian, and the Holcim facility has had a long troubled history with what its owners claim is a problem with the area limestone – the same patch of limestone the other two plants use. Holcim is already releasing 14 times the amount of four major air pollutants compared to Ash Grove’s 2014 renovated plant, and three times the amount of those same pollutants as TXI.  This permit amendment would make the difference even starker.

Clearly Holcim has a problem child cement plant. Since Kiln #1 opened in 1999 it’s never performed to expectation. Because it would otherwise have set off a national non-attainment area for Sulfur Dioxide, Holcim had to add scrubbers to the plant before it even opened. When Kiln #2 was added in 2000, Holcim predicted it would cut pollution in half. Instead it doubled air pollution and by EPA decree the company had to add new pollution controls and buy Downwinders at Risk an independent scientist to monitor their operations.  Now Holcim is saying their longstanding plan to reduce Carbon Monoxide pollution at that second kiln just didn’t work out and they need to increase their CO “permit allowables” by over 2700 tons a year.

Even for a very large cement plant, that’s a significant increase in pollution. CO pollution is a red flag for poor combustion, which is always worrisome when you’re looking at a facility of Holcim’s size that’s burning a flame at 2400 degree flame 24/7/365. Poor combustion at a cement plant burning tires and industrial waste, as Holcim does, or even coal and Petroleum Coke, means the creation of more “Products of Incomplete Combustion,” or “PICs.”

PICs are bad news. Dioxin – the poison in Agent Orange – is a PIC but there are thousands more. Some are extremely toxic. Holcim is already releasing 168 times more CO than the newer Ash Grove plant – located just across Highway 67, and nine times more than former Bad Boy TXI. That’s a lot of potential PICs. Something isn’t right in the basic design of the plant to make it so inefficient, but instead of investing in a new plant, Holcim just wants to increase its pollution levels.

There’s a second part of Holcim’s request that’s even more disturbing.  Besides the increase in CO pollution, Holcim is seeking approval from the State to burn 100% Petroleum Coke as a fuel for its Kiln #2.

Pet Coke is a refinery waste high in BTU value and sulfur content. It’s very dirty. It’s basically solid carbon. In the application submitted by Holcim, the company says Particulate Matter pollution could go up by 100 tons per year. There’s also a very good chance of increases in smog-forming Nitrogen Oxides and Sulfur Dioxide pollution. Separately there’s also a significant but undocumented increase in CO2 that will occur because of Pet Coke’s composition, so this is a very bad Climate Crisis move as well.

Holcim says not to worry – most of these increases are on paper only and they’re not really changing the emissions, just “refining them.” But with the plant’s history, it’s more likely air pollution will increase, and not by a little bit.

TCEQ’s permit engineer assigned to the Holcim case says this is only a preliminary application and that the company will have to answer more questions about pollution increases, and more importantly will have to stage a “test burn” to see what the impact of burning 100% Pet Coke will actually be (under ideal conditions when everyone is looking over their shoulder). Many long time observers of the modern TCEQ under Governor Greg Abbott are skeptical any of this will happen before Holcim gets their permit however.

Because of the increased volumes of pollutants, this application will be generating an official response from Downwinders requesting at least one public meeting for a briefing on the permit and objecting  to any increase in PM and NOX, insisting on test burns using 100% Pet Coke before the permit is approved, and protesting any increase in Climate Crisis pollution.

CLICK HERE TO SEND AN EMAIL NOW TO THE TCEQ

AND ALL LOCAL STATE REPRESENTATIVES AND SENATORS

Requests should be addressed to the Texas Commission on Environmental Quality as well as local State Representatives and Senators – not just those representing Midlothian.

Contact all of these folks individually, or you can send them and the TCEQ the same email requesting a public meeting on Holcim’s permt via Downwinders’ ClickNSend feature. Leave your own personal message too.

If you feel you’ll be affected by Holcim’s new air pollution, you have a right to ask for a contested case hearing – a formal legal proceeding that sets a higher bar for Holcim to get a permit. In order to request a Contested Case hearing, you must send the TCEQ Chief Clerk:

1) YOUR NAME, or GROUP NAME

6) THE LOCATION OF YOUR HOME OR BUSINESS AND THE APPROXIMATE DISTANCE TO THE HOLCIM CEMENT PLANT TO THEM.

Send your request to the TCEQ’s Chief Clerk: