If a full day of informative workshops by experts, networking with other local activists and organizers, plus lunch wasn’t enough to get you interested in coming to our 1-Day University of Change on Saturday December 8th, what about a mid-day briefing from long-tine Oak Cliff Council Member Scott Griggs on the importance of the upcoming May municipal elections – an election that may see him running  for Mayor of Dallas?

Although widely remembered as a critic of the now-dead Trinity Toll Road, Griggs was first elected in 2011 with quite a bit of  help from Dallas gas drilling opponents.

Seven years ago the Barnett Shale was still hopping and every local government was trying to cash in without concerns of any downside. Fights over drilling restrictions in Fort Worth, Southlake, and Grapevine had preceded the Dallas battle and industry wanted to impose the “Fort Worth model” of  unchallenging drilling provisions on Dallas. 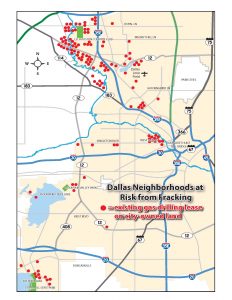 In 2011, nobody had yet discovered the secret agreement between then City Manager Mary Suhm and Driller Trinity East that gave permission to do all kinds of things not allowed by the city at the time – like drilling in floodplains and parks. City staff was going out of its way to shepherd drilling permits for the company through the bureaucracy even as citizen opposition convinced other drillers like Exxon to pull out of Dallas. Nobody could figure out why until the secret agreement was leaked to the Dallas Observer. There’s no direct evidence of who released the agreement, but speculation centered on Griggs, and then-city council member Angela Hunt. 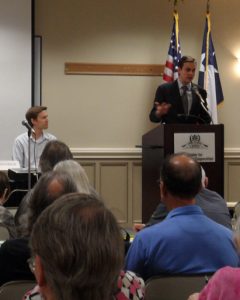 From that point forward citizens begin winning more votes at the Planning Commission and Council. First to go was the favoritism staff had shown the proposed Trinity East drilling permits. They were defeated outright and resulted in a lawsuit filed by the company still in the courts over who promised to do what for whom. In the wake of their demise,  the most protective gas drilling ordinance then proposed for any Texas city was passed by the Dallas Council. It established a more restrictive “Dallas model” to counterbalance the more lenient Fort Worth one.

If the only major accomplishments of Griggs city council years was killing the Zombie Toll Road and saving Dallas from irresponsible gas drilling, he’d have earned his pay. But those are only two of the many battles Griggs has fought with City Staff and his more establishment-oriented colleagues. The recent historic change in the city’s housing policy was fueled by his reforms. For the first time the City has made it policy not to keep concentrating subsidized housing in South Dallas areas which already have more than their fair share amidst high rates of poverty and lack of employment opportunities. 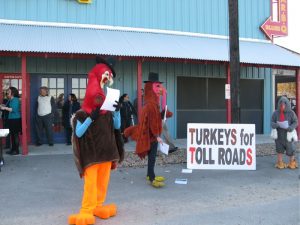 time and again over issues of responsiveness and common sense. Even though he sits on the other side of the horseshoe, he has the healthy skepticism of a citizen still fighting City Hall.

We’re not the only ones who hold a high opinion of Griggs. D magazine names him “Best Politician” in 2012 and Best Public Official 2016. the Dallas Observer named him Best Politician (2012) and Best Council Member (2013, 2015). The venerable Oak Cliff Conservation League gave him their Oak Cliff Warrior Award in 2015. 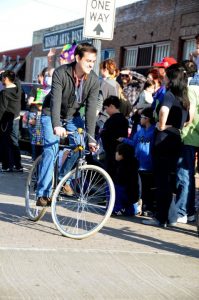 Griggs terms-out as of this coming May and speculation is running high that he’s preparing to run for Mayor. If he wins there’s no doubt he would be the most progressive mayor for Big D since Laura Miller ten years ago. Depending on who takes his place and what other candidates win, Dallas could end up with an 8-vote solid voting progressive/green majority for Griggs. That promise of a truly reform-minded council is what’s motivating a new wave of anticipation for the municipal elections, especially after a very successful November in Dallas County as a whole.

Downwinders is proud to host the lunch time briefing from Council Member Griggs. Just as progressives used the recent mid-terms as a way to build a bluer Congress and State House, locals will be seeking to use the May Dallas elections to seat the most environmentally friendly city council it’s ever known.

Local governments are becoming the launching pads for change as state and federal agencies retreat or surrender their basic quality of life responsibilities. Having a progressive majority in Dallas that could join this effort would be a huge jump start for all kinds of good things to happen.

If Griggs decides to run (the window for filing to run in May begins January 16th)  1-Day University participants could get a sneak peak at the kind of vision he’ll be promoting for the city, maybe a trail run at a stump speech. For Dallas environmentalists, the May elections may actually begin at lunch on December 8th. Make sure you’re there.

Sign up for the 1-Day University here, or pay at the door. 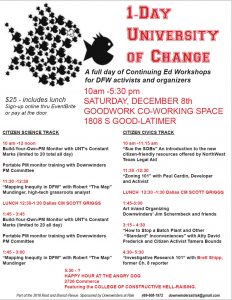