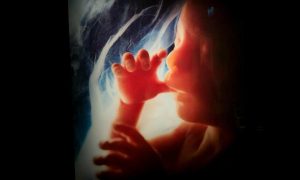 Scientists already knew that maternal exposure to PM pollution had the potential to harm fetal development. Studies have documented higher rates of Autism, ADHD and other developmental diseases in close proximity of freeways and other large sources of PM pollution. But until now researches hadn’t actually identified how PM harmed newborns.

According to a study presented last week at the European Respiratory Society’s (ERS) international congress in Paris, researchers have found the first evidence that particles of air pollution travel through pregnant women’s lungs and lodge directly in their placentas.

Using an optical microscope, they examined the placentas of five non-smoking women who all delivered healthy babies. They found 72 dark particles among 3,500 cells and then used a powerful electron microscope to examine the shape of some of the particles. They looked like the sooty particles found in macrophages in the lung.

One of the study’s authors, Dr Lisa Miyashita of Queen Mary University of London, ruled out almost any other substance, “We can’t think of anything else they could be. It is very evident to us they are black sooty particles.” Dr Norrice Liu, also at Queen Mary University of London and part of the team stated,  “We also know that the particles do not need to get into the baby’s body to have an adverse effect, because if they have an effect on the placenta, this will have a direct impact on the foetus.”

Almost every effort examining the health effects from PM pollution over the last decade have all concluded there’s no level of exposure that’s not capable of leaving some harm behind. What this new study indicates is that many of us may already be harmed by exposure even before we’re born and that may make additional exposure that much more harmful.

Just this past month two new reports were published that linked PM pollution to significant IQ loss and diabetes.

In separate research, also presented at the Paris congress, researchers found that children with early onset and persistent asthma fared far less well in education than those without the condition.

The study, conducted over 20 years in Sweden, showed that children with asthma were three and half times more likely to leave school at the age of 16 with only basic education and were also twice as likely to drop out of university courses