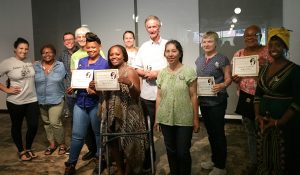 In the middle of the wettest day in the wettest September DFW had ever recorded, the clouds parted and a dozen brave and curious souls turned out to go through the region’s first citizen science training for portable air monitoring.

Some were already clean air activists. Some were technology geeks. Some were people simply interested in having the ability to tell what’s in the air they’re breathing. 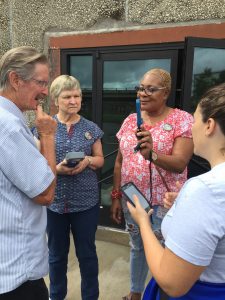 When they showed up to our GoodWork headquarters they got a tag team education on Particulate Matter pollution courtesy of a curriculum designed and presented by Downwinders board members and scientists. The information set-off lively discussions among residents of Joppa and West Dallas where PM problems are common. For others, the facts brought new awareness about this under-publicized but insidious pollutant.

But no doubt many thought the real fun started with the hands-on field training using Downwinders’ three Aeroqual 500 Portable PM monitors. Despite the forecast, there was actually no rain during either the morning or afternoon session and the future scientists got to go explore inside and out.

They recorded the dust explosion set off by simply sweeping the floor with a broom. They saw how a lit match changed the composition of the air in a room. They stood downwind from fog machines that were faux-smokestacks for the day and they measured the ambient air in Sunny South Dallas on Good-Latimer. They learned how to sync meteorological tools with the monitors and record the necessary information to make a sampling more useful. They asked questions, they got in arguments and at the end of it all, they got certified as an official Citizen Science Apprentices. They’ll now be able to go out with our PM team for supervised research runs and after two of those they’ll be able to check out monitors on their own through our monitor lending library.

Our PM Committee is already looking to host another training session on a weekend in late October and these will be reoccurring on a regular basis from here on out. Be the first one on your block.