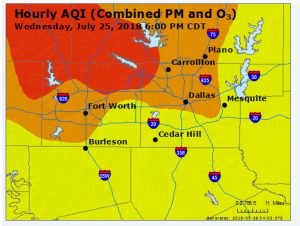 With months of  “ozone season” still to come, 2018 is already one of the worst years of DFW smog pollution this decade.

As of August 9th, six out of the 20 North Texas ozone pollution monitors have registered at least four days when the average concentrations of smog were 80 parts per billion or higher over any eight-hour period.  The current EPA ozone standard is 70 ppb over eight hours. Most scientists who study ozone pollution recommend between 60 and 65 ppb. 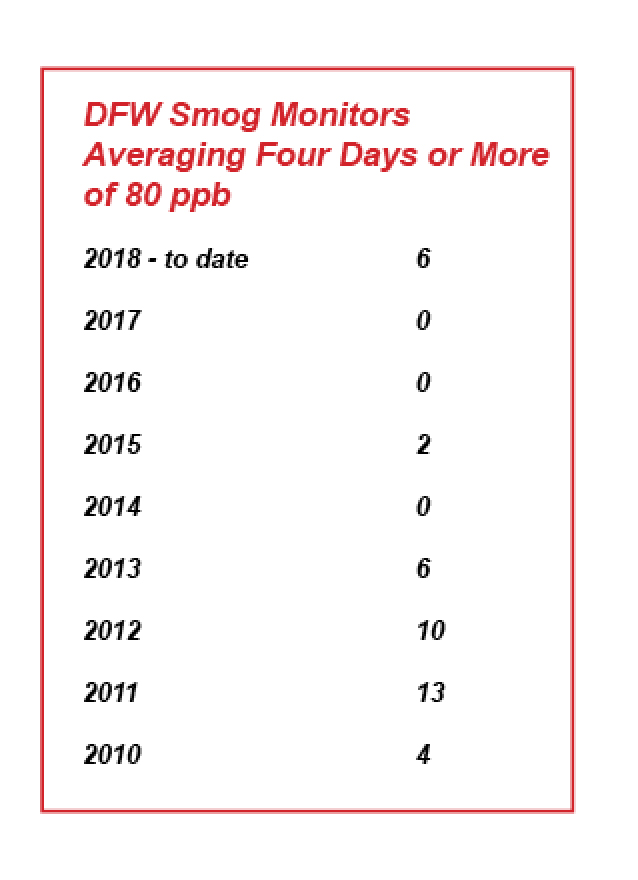 Unfortunately our lungs don’t breathe averages. Regulatory accounting smooths out the highs and lows. This summer has seen at least five sites record smog in the 90-95 ppb range for more than an hour. That’s very hazardous breathing.

There’s no question there were public health consequences to those extreme air pollution levels. Asthma attacks were triggered, COPD patients were gasping, but also strokes and heart attacks. We just don’t know how many…until after the fact.

It’s the first time in two years that any DFW monitors have had 8-hour averages of 80 ppb or above, and the first time since 2013 since there been at least six. In fact, this year’s total number of 80-or-above monitors is almost equal to the total number from the last five years combined.

The last week of July was a bad one for DFW breathers.

Besides the number of high smog readings, the location of the monitors recording them should be of concern. Five out of the six registering the highest numbers this year have long histories of being among those registering the highest numbers in past years – Grapevine, Eagle Mountain Lake, Dallas Hinton, Dallas North and Frisco. Only Cleburne might be considered an outlier. The fact the same sites keep popping up over and over again means the strategies for reducing smog pollution aren’t working when put to the test like this July’s heat wave.

But of course that assumes there are any strategies for reducing smog in DFW. And technically there are. But they aren’t being vetted for their effectiveness, and they aren’t being enforced, and some are even being rolled back. After 27 years of continually violating the Clean Air Act for smog pollution, there’s nobody in any level of government working on a cogent plan to get DFW into compliance. Law and order rhetoric from Austin and Washington not withstanding.

What made July smog worse than usual was the heat. Climate scientists are telling us we’re going to be having more summers like 2018, not fewer. So this year’s levels are probably a precursor, not an aberration. But that’s a hard sell to elected officials whose campaign accounts depend on denying the science.

The punch line to this year’s sudden and dramatic spike in higher smog levels?  It might still result in officials taking the Orwellian stand that the air in DFW is getting better. How is such a thing possible? Through the wonders of regulatory math.

EPA’s classification of how bad or good air quality is in any region is done by taking the 4th highest annual reading from each monitor and then keeping a rolling average of three years’ of those annual 4th highest numbers for each monitor. For this year, only the 4th highest numbers for 2016, 2017 and 2018 are included in the rolling average. Denton did see high numbers in 2015, but those are all now rolling off and not being counted. 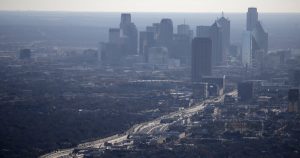 Up to now those 2015 numbers have kept the regional smog average in Denton at 81 ppb despite relatively light ozone seasons in 2016 and 2017. Now that that 2015 high number is rolling off, it would take the Denton site having 4 separate days of 90+ ppb smog in the next 90 days to make the average rise back up to 81 ppb. If that doesn’t occur, then the Denton average could drop to somewhere in the mid-to-upper 70 ppb range.

Should that happen, expect to see lots of regional back-slapping among officialdom for bringing down that Denton number and “continuing to make air quality progress.” Even as more monitor sites see higher smog numbers, officials will declare their anti-pollution measures are working splendidly. But that will not be the case, and you should not be misled.

While there might be a bit of specific progress made at the Denton monitor site, the increase in the number of other sites registering  higher levels of smog they haven’t seen in years negates it. If all it takes is a heat wave to send two years of lower numbers down the drain, and the future is full of heat waves, then that’s not really progress, is it? We’re forced to put our fate in the hands of the weather instead of our own planning. Not very proactive, but that’s the state of air pollution control in DFW in 2018: “Please Dear God, keep it cool this summer.”

Even before the Trump Administration came into office the EPA wasn’t enforcing provisions of the Clean Air Act that DFW blew by ages ago – not correctly classifying its non-compliance, not requiring controls on major polluters, providing one extension after another. Now of course, there’s total abdication of even the pretense of striving toward cleaner air for its own sake.

Which is why if any progress is going to be made over the next 2-3 years, it must be made at the local level. No one else gives a damn. Officially.