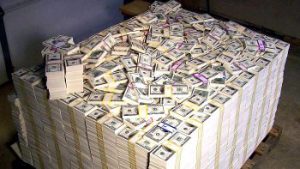 Over a decade ago $500,000 was collected from North Texas local governments to protect Texas air.

It’s been sitting in a bank account ever since. Until recently, not too many people even knew it existed.

Now, citizens want to use a part of it to build a world-class 21st-Century air monitoring network for DFW.

In 2006, then-Dallas Mayor Laura Miller teamed up with Houston Mayor Bill White and organized a coalition of Texas local governments to oppose the “fast-track” permitting of a dozen new coal plants Governor Rick Perry was pushing.

15 North Texas cities, Houston, and McLennan County (Waco) established the “Texas Clean Air Cities Coalition” to fund a legal team and the technical expertise needed to take on not only the big utility companies, but Perry and the State of Texas as well.

But before the battles could begin, a settlement was reached that cancelled all but one of the coal plants. The approximately $500,000 raised by the Coalition to wage clean air war was not needed now. Instead of reimbursing the separate contributors, it was kept in total by the Coalition, possibly because it had already been budgeted to “protect Texas air.” 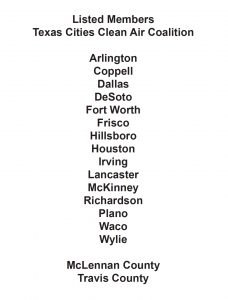 And there it’s sat ever since. With each new election cycle, the number of local elected officials who knew about the fund got smaller and smaller, until there was hardly any institutional memory of the Coalition or its half-million dollar fund left at all.

Downwinders only recently found about the money in the course of discussing funding of the new regional air quality monitoring network we’re working to establish with local policymakers.

While visiting with Dallas Council Member Scott Griggs about Dallas establishing such a network in partnership with Plano and Dallas County, CM Griggs mentioned the Texas Clean Air Cities Coalition and the $500,000 it had accrued, and asked us how our Network idea was different than the TCACC mission. We consider ourselves the premiere clean air watchdog group in DFW but we had no idea the Coalition or its fund was still around.

And, as it turns out, Griggs is the “Principal Officer” of the fund.

Needless to say, we were gobsmacked.

After reviewing some paperwork on the Coalition in Griggs’ office, we answered his question by suggesting that while the original goal of TCACC was to actively oppose those “fast-tracked” coal plant permits, the mission of the monitor network was to gather air quality information for public health purposes.

But on closer examination, we did notice similarities. Many of the municipalities that contributed to the Coalition fund are the same ones that are now interested in participating in the new monitor network, which like the Coalition, is a regional effort. The Mission of the Coalition is “to protect Texas air” primarily, but not exclusively through permit opposition. The spirit, if not the mechanics of the Coalition and Network are originating out of the same concern for public health.

That being said, extracting the money from the fund for modern use could be a convoluted affair. Despite the broad executive 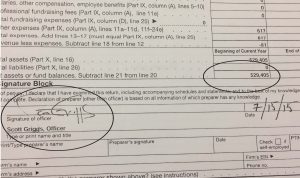 powers given to the Principal Officer in the Coalition’s by-laws, including the authority to commence litigation and intervene in permit proceedings, they don’t address air quality monitoring directly per se. It would appear to take a vote of the remaining Coalition members to ratify a new expenditure for the regional monitoring network, but it’s not clear who they are.

Of the five Coalition officer positions listed in the paperwork Downwinders received from Griggs, three would appear to be vacant, with no one representing Houston, Waco, or Irving due to retirements or elections. Only Griggs and Arlington City Council member Kathryn Wilemon, who both term out in May 2019, remain in elected office.

The discovery of the Coalition fund in 2018 raises all sorts of questions about why it didn’t get used over the last decade of air quality problems. Although there hasn’t been another tsunami of coal plants proposed, there’s still cement plant plants burning industrial waste, still oil and gas facilities still releasing way too much methane, still battles over batch plants in places like West Dallas and Joppa that the money could have gone to…but didn’t. Advocates like Downwinders didn’t even know about it to be able to make the case for its use. It’s a large policy failure on all fronts, that perhaps can be partially redeemed now by spending some of the the collected monies on another regional clean air initiative.

After learning of the Coalition fund, Downwinders asked Dr. David Lary of the University of Texas at Dallas Engineering Department to outline what kind of North Texas air monitoring network could be built with approximately HALF of the fund’s $530,000.

Dr. Lary is the author of the National Science Foundation grant that originally proposed the idea of grid air monitoring in DFW. He’s an expert in the field of high-tech low cost sensors and just got a large US Army contract for testing sensor equipment for the nation’s armed forces.

What he suggested was a 200 + sensor network, operating mostly on solar power and using wifi to bring real time air quality information to the regions seven million residents..for a low, low price of $280,000. This is his itemization: 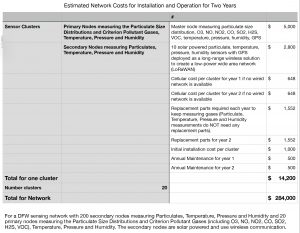 All previous plans had any regional monitoring network growing slowly by charging affordable fees for purchase and installation of sensors. If there’s a large clean air fund that could pay for the immediate build-out, it would propel DFW into the front ranks of “smart cities” and provide public health benefits much sooner.

Now that a City Council Quality of Life Committee hearing has been set for Dallas to decide whether to join the monitor network, the opportunities the fund could provide deserve overdue attention. The question of what role the fund can or should play in paying for a new regional clean air network will be important. Having squandered the ability to provide the kind of assistance it was created for over a decade ago, let’s hope current officials don’t make the same mistake and ignore public health…again.