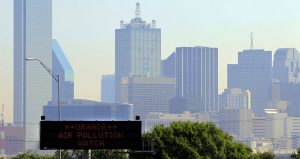 No matter what happens the rest of this 2018 “Ozone Season,” these numbers insure DFW will still be violating the Clean Air Act for a 27th year in a row.

Grapevine and Eagle Mountain Lake monitors have recorded the single highest 8-hour ozone levels in the state so far, at 89 and 92 ppb respectively.

Breathers will have to wait longer to find out how this year’s dosage will affect the all-important regional average, driven recently by the results from the Denton Airport monitor. The regional average is the highest 8-hour average number from any one monitor after averaging the 4th-highest ozone readings from each of the last three years. Extremely high years can be off-set by better years, or visa versa.

Slowly, the DFW regional ozone average has come down from the really bad old days of the 1990’s and early-Oughts. But for the last seven or so years, it’s plateaued in the 80-85 ppb range. As of 2017, Denton had a three-year, regional-leading average of 81 ppb.

Many observers believe the recent stagnation in the decrease of DFW smog is due to increased emissions generated by the Barnett Shale gas play taking up the slack from decreases from other large sources like kilns or cars.

A 2015 UNT study using the State’s own air modeling demonstrated the disproportional impact gas industry sources like compressors had on the area’s historically worst performing monitors in Northwest Tarrant County and Denton, accounting for up to 3 ppb of smog.

Closure or mothballing of three large East Texas coal plants will help keep the numbers down this summer from what they could have been, but it may not be enough to outweigh the impact of continued growth and reluctance by authorities to crack down on other large sources like the gas industry or the Midlothian cement plants.

And this summer’s early smog crisis is yet another reminder about why a 21st Century locally-controlled monitoring system is needed. During this last stretch of 100° + heat, when ozone levels were often climbing by 10 ppb or more per hour, the official EPA/State monitors were up to 2 and a half hours late. At 1 pm, a resident was still looking at 10 am data that was obsolete.

If the federal and state governments won’t do anything but make it more difficult to solve our chronic smog problem, it’s self-defense for local governments to at least be able to warn residents about how bad the air is in real time and at a location near them instead of the other side of town.