Reviewing a decade of death statistics revealed a 16% increase in mortality risk on the first day of haze and a 27% increase on the second day compared to better air days.

If the haze was accompanied by high ozone pollution, the risk of death increased by 79%.

As shocking as this sounds, it aligns with other recent studies that have found a connection between short-term increases in air pollution and aberrant mental behavior. Significantly higher rates of Autism, Parkinson’s, ADHD and juvenile delinquency have all been linked to PM pollution, most at ambient levels assumed by regulators to be “safe.”

PM pollution has even been linked to low stock market performance in more than one study.

PM pollution is so microscopically tiny it not only goes deep into your lungs, it actually can pass through your lung lining directly into your blood stream. Think about the places where your body uses a lot of blood – your heart and your brain. We’ve known PM causes heart attacks and strikes for some time. But research linking it to a wide variety of brain disorders is only fairly recent. 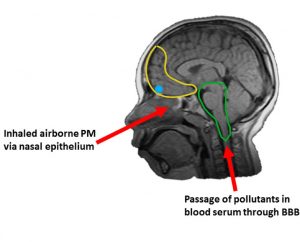 Authored by faculty at Hong Kong Polytechnic University, this most recent study examined more than 284,000 deaths, including those among people with mental and behavioral disorders including depression, bipolar, schizophrenia and dementia. It defined “haze days” as those on which pollutants gather in the air and cut visibility, usually dry days with low winds. In the study period from 2007 to 2014, there were 111 haze days when particle pollution was on average twice as high.

These findings are compatible with a recent Belgian study, which reported “[Short-term] increases in outdoor air pollutants such as particles or ozone can trigger suicide, particularly during warm periods, even at concentrations below the European thresholds.”

Unfortunately, we may have a local way to further prove this hypothesis. On October 19th of last year there was a still unexplained catastrophic air event that caused PM levels to go much more than twice a high as “normal,” accompanied by an increase in ozone pollution so severe it bumped the entire regional average by a part per billion. Could an examination of death certificates in Ellis, Dallas, Tarrant and Denton Counties reveal if this really “bad air day” caused a spike in North Texas suicides? 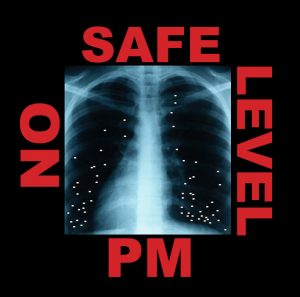 Downwinders at Risk’s “No Safe Level”  PM Pollution Campaign Committee has scheduled its next meeting for Saturday March 10th at the Meadows Center at 2900 Live Oak.