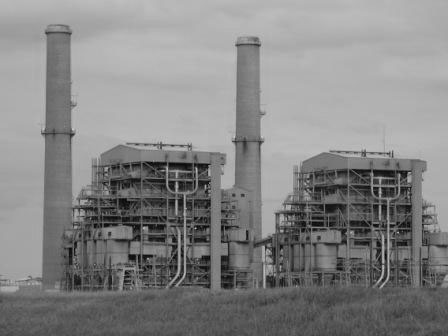 After years of declining fiscal health, the Big Brown lignite coal plant finally succumbed last Friday.  An announcement was made by its most recent caretaker, Vistra Energy last Friday morning. The cause of death was obsolescence. It was 47.

Controversial from its birth, the 1. 2 Gigawatt Big Brown lived up to its name and was Texas Utilities’ flagship power plant for decades. It began by burning 100% Lignite Coal, the mud-like fossil fuel native to East and Central Texas. By the end however, it was importing thousands of tons of “cleaner” Wyoming Powder Basin Coal in long freight trains to comply with interstate pollution rules.

Along with other coal-fired power plants in East Texas, Big Brown was citied for causing acid rain to by SMU Chemist George Crawford as early as the 1980’s. It was then discovered to be a major contributor t0 Dallas-Fort Worth smog, a fact reinforced by a 2008 study from another SMU professor and former EPA Regional Administrator Dr. Al Armendriz,  and more recently by Dallas Medical Society’s Dr. Robert Haley in his 2015 report on ozone levels and public health in DFW. Public Citizen/Texas and the Sierra Club had been particularly hostile to the plant’s continued operation.

As coal lost favor as an energy source, Big Brown’s estimated lifespan had been the subject of countless rumors over the last decade. Towards the end the plant consistently refused modern technology which might have prolonged its life, such as Sulfur Dioxide scrubbers and Selective Catalytic Reduction for smog pollution.

The timing of the plant’s demise was seen as a major embarrassment to officials in the Trump Administration, who’ve promised to promote coal. On the same day as Vistra’s notice about Big Brown’s demise, Trump appointed known fossil fuel promoter Kathleen Hartnett White to lead the White House Council on Environmental Quality.

It was the third Texas coal plant to expire in less than a week. Big Brown was preceded in passing by the Monticello lignite plant, which announced its departure on October 6th. Vistra said its smaller Sandlow power plant near Bastrop was to be closed in 2018 as well.

In 2016, these three coal plants emitted a total of 166 million pounds of sulfur dioxide, 24 million pounds of nitrogen oxide, and 21 million tons of carbon dioxide pollution. Their absence during the 2018 “ozone season” could be the first time DFW stands a chance of complying with the Clean Air Act in 27 years.

Survivors, for now, include the coal-fired Martin Lake and Oak Grove power plants, as well as NRG’s Limestone power plant, southeast of DFW.