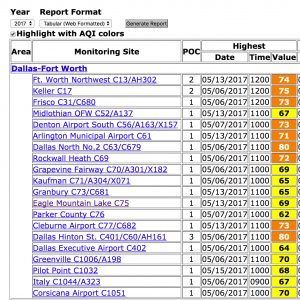 At one point in mid-May, four out of eight days were “ozone alert days.” While only one of those was critically high, the wave of higher levels was enough to push the regional average over the current 75 parts per billion (ppb) standard for 2017. It will be the 26th year in a row the DFW area has been out of compliance with the Clean Air Act’s ozone (smog) standard.

The worse news of course is that the current standard is obsolete and in the process of being lowered. The Obama EPA adopted a new 70 ppb ,and scientists advising the EPA said it really should be closer to 60-65 ppb, when many people begin noticing health effects.

To date, the Hinton Street monitor on I-35 just north of downtown Dallas and the Dallas North Site near the LBJ Freeway have the highest eight-hour averages each at 80 ppb from May 6th. Hinton saw a 1-hour reading as high as 90 ppb while North Dallas topped out at 88.

But the key to DFW’s smoggy regulatory status is the Denton monitor because it’s historically been the worst performing among the 20 North Texas monitors the state operates. It took until the May 15th episode for the wind to blow in its direction long enough to raise its numbers and to seal DFW’s ozone fate under the law for another year. It now sits at 77, barely over the current standard….but that number will rise as the summer, and ozone season progresses. 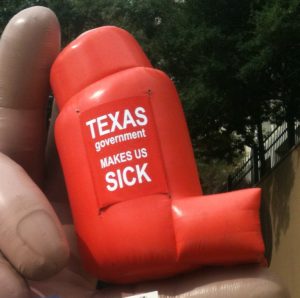 Although May saw a big wave of ozone, the region was lucky that three out of four alert days were on the weekend and shifting winds. Had the May 6th episode occurred on a Monday instead of Saturday, the numbers probably would have been significantly higher.

Forecasters have said it will be a hotter summer than last year. If so, that often portends some awful smog as well.

That’s too bad, because prospects for ANY kind of DFW clean air plan, much less a more effective one went down the tubes with the election results. There is no effective oversight by the EPA. There are no new air pollution controls being required of any major sources. We’re now completely dependent on the coattails of existing regulations, the marketplace, and whatever we can build from scratch at the local level to get us out of our dirty air rut.

Meanwhile, every so slowly, the Trump Administration is signaling it would really like to roll back that new 70 ppb smog standard to the old 75 one. It recently asked for, and got, a delay in a lawsuit filed by industry to challenge EPA’s decision. Almost every commentator believes this is in anticipation of the Trump EPA giving up the fight. But while that might be a short term victory for polluters, the law behind establishing these ozone standards makes it less likely to be a permanent one.

Nevertheless, these are more reasons for us to be about the business of becoming more self-reliant in addressing DFW’s chronic air pollution problems. 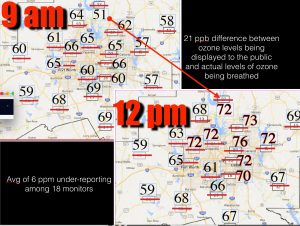 As always, every time there’s an ozone alert day, we’ll be tracking the smog on our FB site, at least as best we can when there’s a two-and-a-half-hour lag time between sample and posting of the sample on the state’s handful of monitors.

And …as you might have noticed, every time there’s a DFW ozone alert, you’ll also get a nudge from Downwinders at Risk to contribute some money to the cause of cleaner air.

Some of you may have felt assaulted by these appeals when things were getting smoggy and then smoggier in Mid-May. We apologize for the inconvenience, but not for the appeal. Ozone Alert Days are the most obvious signs of a failed state policy to provide safe and legal air to 7 million people. If we’re going to continue to be effective on your behalf, we need all the help we can get. Thanks. 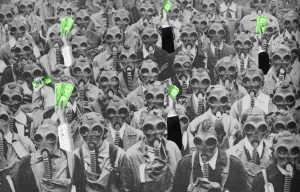