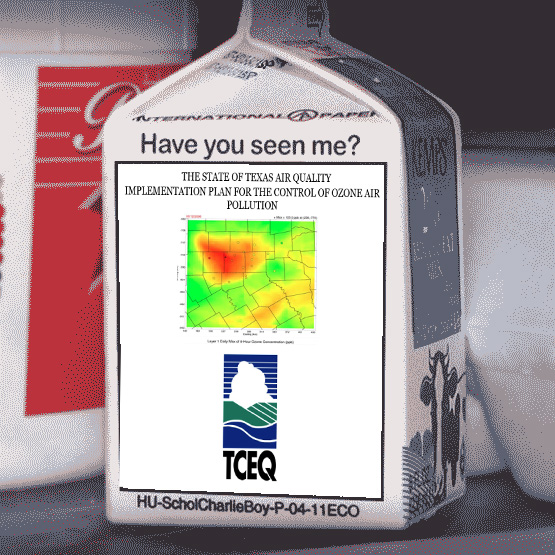 Somewhere deep in the cubicled bowels of the Region 6 EPA offices in downtown Dallas lies a draft of a letter to the State of Texas telling Austin it’s proposed clean air plan for DFW is inadequate and must be re-written.

It likely goes through the litany of well-known public objections the EPA has about the plan, originally expressed while it was being drafted by the Texas Commission on Environmental Quality:

Which is all longhand for “this plan is not cutting enough air pollution to work.” 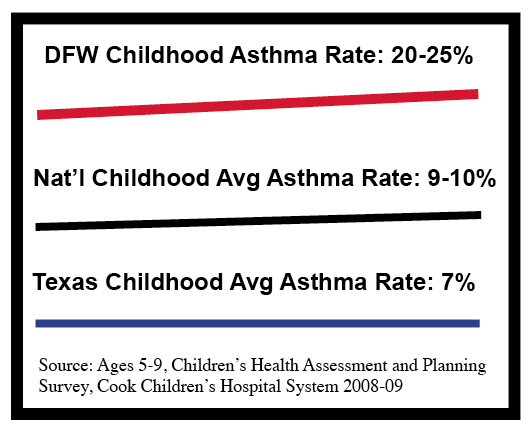 The current standard for smog, or ozone pollution, is 75 parts per billion over an eight hour period. That’s supposed to come down to 70 in the next few years as a new, more protective federal standard is applied.

DFW’s eight hour average is 80 parts per billion at the start of this “ozone season.” (based on the numbers coming out of the Denton air quality monitor) The North Texas region has never been in compliance with the smog standard, even when it was 120 parts per billion over just an hour. That’s 26 years of bad air and counting.

The state’s plan is supposed to be response to this problem, but for the second time in a row, Texas has written an air plan for DFW that does nothing at all.

Before November, that plan was going to be rejected, in part, or whole, as insufficient by EPA, sent back to Austin for a re-write and then, fingers crossed, Downwinders and others were hoping to persuade the Agency to substitute its own federal plan of action. That would have been a first for DFW.

Curry’s response was to say that timeline was too fast – despite having had the state plan in-house at EPA for over a year, and access to its conclusion for even longer.  Plus, he said reassuringly, they’d all gone through “transitions” from one administration to another. Everything would be all right. 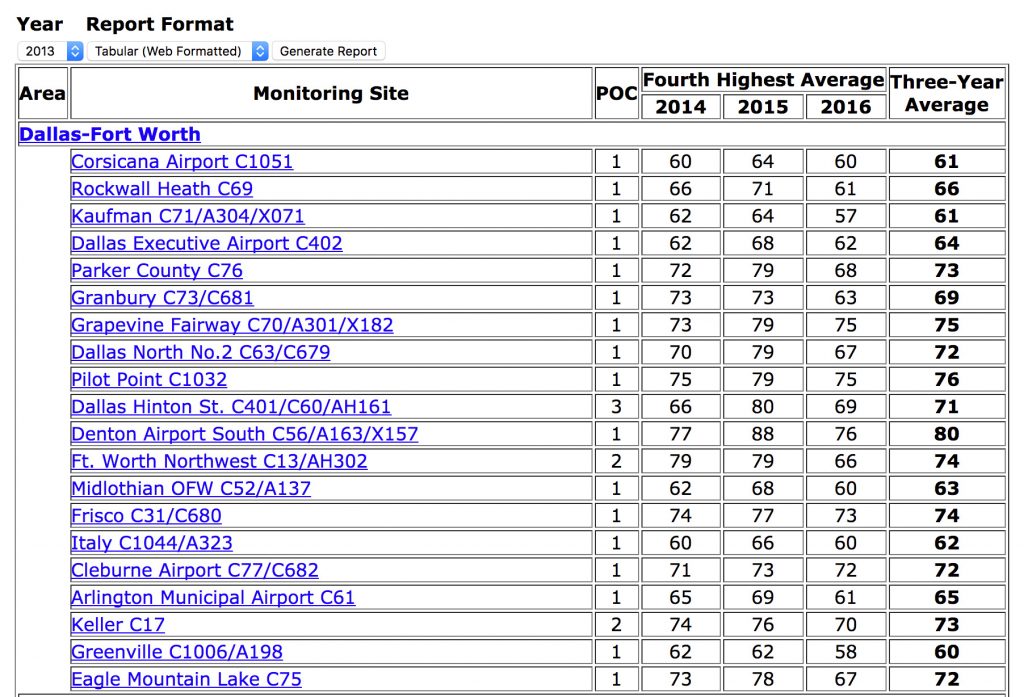 But that’s not true.

Donald Trump will not be able to revive the coal industry. He will not be able to revoke President Obama’s climate change policies en masse without court fights. Meta national and international trends are beyond his gutted EPA’s reach to impact. But he can keep seven million DFW residents from breathing safe and legal air for the next decade.

Right now, the state clean air plan for DFW is still parked at EPA. Because of the change in administrations, the staff is probably being told to do the math twice and make only the most conservative calls. That may mean rejecting only certain parts of the plan, albeit critical ones, like the section that promises to get down to 75 ppb by the end of this summer.

Yes, that was the original goal of the plan way back when it started being put together in 2014-15. If we have another cooler, wetter summer it’s possible we could get close. If we have a typical DFW summer, the smog might get worse, as it did the last time a state clean air plan that did nothing was being implemented in 2011.

Besides rejecting the “attainment” part of the attainment plan, the EPA could also reject the way the state defined new control technologies as impractical or too costly despite being widely used in industry. One example is electrification of compressors in the gas patch. Even the gas and oil’s industry’s own textbooks cite this one simple switch in power sources, from diesel or gas to electricity to power huge, locomotive size pipeline compressors, as being the standard fix in metropolitan areas with bad air.

But the state’s rejecting requiring electrification because it says it just isn’t practical to expect that those compressors can find power close enough to the grid to plug-in….in the fourth largest urban area in the country.

Another example are the three Midlothian cement plants, still the single largest sources of air pollution in DFW.

One cement plant operator has voluntarily installed what’s considered to be a state-of-the art pollution control system that’s capable of reducing smog-forming emissions by 70-90%. This system is also being used with great effect in Europe on almost a dozen plants. But the state’s plan doesn’t take note of this sea-change in technology and doesn’t require the other three cement plants in Midlothian to install it, saying it hasn’t been proven yet – even though it’s in full scale operation in a Texas cement kiln right now.

But while the local EPA staff may have felt more confident about making those calls on new pollution controls in a Clinton administration, it’s unlikely they’ll advocate for them now, knowing their new bosses in DC will not approve.

So they’ll put a big’ ol “REJECT” stamp on the state’s paperwork and and send it back to Austin for a redo.

From where it will never see the light of day again.

Officially, when the EPA rejects a state clean air plan, it triggers a two-year deadline to come up with another one. So normally, the state would go through the motions and eventually churn out another plan, it would be found inadequate by EPA again, the whole thing would wind up in court and either the EPA and/or environmentalists would win some concessions.

But the EPA is transitioning from one smog standard to another. There’s a gap in enforcement of the old standard to get ready for the new one. So the State of Texas, which hasn’t even tried to write a serious clean air plan in decade, and doesn’t even believe smog is bad for you, will get a Mulligan from the EPA for not being able to produce a clean air plan for DFW that works.

Not only will the state of Texas not be penalized for writing an ineffective clean air plan, but if DFW is still not in compliance with the older 75 ppb smog standard by the end of this summer, it won’t be penalized for that either.  Because now the EPA is switching over to the 70 ppb standard – and there are brand new deadlines for brand new clean air plans….for the State of Texas to willfully ignore.

No, the only people being punished for the state’s aggressive neglect of its air are DFW’s residents, who must breathe the results of that neglect for almost half of every year now. Make no mistake about it, it’s a statistical certainty that neglect is killing people and making them sick. Dr. Robert Haley’s landmark study using the state and EPA’s own data shows that number could be as high as 100 victims a year. 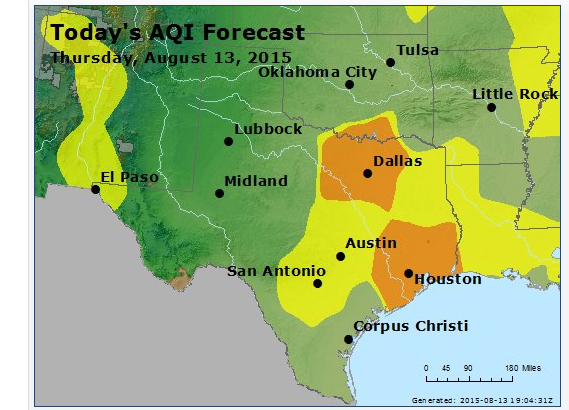 Now add a Trump EPA to the mix.

You’d think a region in continual non-compliance with the Clean Air Act for almost three decades would be a priority for receiving an effective clean air plan. You’d be wrong.

In fact, since DFW average is currently 80 ppb of smog, and not 81 ppb, the state of Texas does not even have to submit a clean air plan for DFW until AFTER the region fails to meet the new 70 ppb standard by 2020, at which point Texas will have two more years to write another plan that does nothing.

This is how 80,000 votes spread over three Midwestern states can poison the air for seven million Texans.

The one thing that could throw a wrench into this scenario? Court cases filed by environmentalists to make sure EPA doesn’t allow backsliding in DFW air quality. But that is a very thin green line on which your lungs can pin hope, and it will always be after the barn door has already been left for too long.

We’ve gone from being on the precipice of what would have been the first real pollution reduction plan for DFW in a decade, to now looking at a decade of no action at all outside that which we can generate as citizens defending ourselves. In 2017, Environmental protection in Texas is very much a Do-It-Yourself proposition.

As the region’s only group charged with the job of protecting our air, Downwinders is looking at starting from scratch and reassessing our strategy. We have to find new ways to leverage our need for safe and legal air. We worked hard for over three years to win a good air plan. Now it’s back to the drawing boards.

One of the things we’re putting a lot of effort and money into building is our own independent air quality monitoring network. There are only 20 smog monitors for all of North Texas, half of which are used in rural areas for boundary readings. There are no smog monitors in Wise County, despite all the computer models showing it to be where the highest levels of the pollution are probably located.

If we can do a better job of documenting bad air, we make the case for why we need more actions to reduce air pollution, instead of do-nothing plans from Austin.