Discrimination can kill in lots of ways. In Dallas, one of the ways has been lead poisoning.

It may be hard to imagine now, but up until the mid-1980's there were three lead smelters operating right across the street from homes in Dallas. Those homes were all south of the Trinity River: in West Dallas and Cadillac Heights. Along with all the other things and people the city considered undesirable, the poor, the black, the Mexicans and the lead smelters were all squeezed in close to the Trinity River.

Lead contamination permeated the neighborhoods night and day, year-round. Smokestacks let loose tons of fine lead particles and other toxins directly into the air residents breathed – every day. The heavier particles created fallout zones where the soil built-up layers of lead in the ground – the same ground people were using to grow their own food. Because the lead smelters "recycled" old batteries by busting them open for their lead, the discarded pieces of contaminated battery casings were used for paving neighborhood streets or as fill, along with the cooked smelter waste "slag." Sometimes this waste was used for "agricultural supplements." Often it was just dumped in near-by vacant lots. West Dallas and Cadillac Heights residents employed by the smelters were covered were lead dust when they got home and played with their children. In doing their laundry, their spouses got exposed as well.

Smelters were not the only sources of lead poisoning. Household paint was doused in it and every car and truck ran on leaded gasoline. But none of these produced the dense clouds of lead, or the constant exposure to it across a variety of "pathways" that the operation of a neighborhood lead factory did. Thousands of African-American and Mexican-American families' lives, entire generations of Dallasites, were wrecked by the pollution from the smelters.

But the last of those smelters closed more than 30 years ago, so why is this ancient environmental justice history lesson important now? Because their legacy is still haunting Dallas neighborhoods.

Take a look at this story on lead contamination that the Reuters news agency recently did. It compares the results of child blood lead testing by Zip Codes across the country to the more alarming levels of lead in Flint. As it turns out, there are lots of places in the nation still suffering high rates of lead contamination – including Dallas. There's an interactive map that allows you to zoom in on a specific Zip Code and find out what percentage of the blood tests were considered "high."

Over 15% of the child blood tests in Dallas Zip Code 75215, the site of the two former Cadillac Heights smelters, were “high” for lead – as high,or higher than the lead levels of affected Flint residents. The Center for Disease Control estimates the national average is 2.5.%. In other words, South Dallas kids are suffering six times the national rate of severe lead poisoning. Residents in North Oak Cliff and West Dallas where RSR was located – 75208 and 75212 – had between 7 and 10% of their child blood tests come in as high or higher than Flint, or 3 to 4 times higher than the national average.

Yes, there's more older housing stock likely to still have lead paint in those neighborhoods, and yes, because of lack lf new development, the soil in those neighborhoods may still contain lead gasoline fallout. But it's more than just coincidence that, in 2017, these two predominantly minority communities still have the highest blood lead levels in their children of any Zip Codes in North Texas.

Lead is an insidious poison. It not only harms you physically with organ damage on many fronts, it also handicaps a person emotionally and intellectually. We know even low levels of lead exposures cause learning disabilities and anti-social behavior from the very beginning of life. There is now substantial evidence to believe lead exposure is directly tied to your chances of engaging in criminal behavior, that is, the more you're exposed to lead, the more likely it is you'll commit a crime. The explosive crime wave of the 1960's – 80s, along with the subsequent dramatic drop, tracks almost precisely with the peaks and decline in lead exposure among residents in urban America over that same period.

In creating lead pollution zones in minority neighborhoods around its smelters, Dallas condemned its black and brown residents to more than just physical hardships –they reshaped the entire culture and destiny of those communities. They made the children in these neighborhoods less likely to be able to learn and more likely to be arrested. What were interpreted as a pejorative cultural stereotypes by the White Establishment, were in fact the result of large-scale industrial poisoning by the White Establishment. Proximity to lead meant less options, less choices – because you started out with less, because the lead had robbed you of your potential even before you knew you had it. Once taken, it can never be given back. What kind of reparations can pay for that?

But this is a preventable fate. We can clean-up lead. We can take it out of the community. Out of the paint. Out of the soil. We can stop the stealing of souls by doing good old-fashioned remedial physical cleaning. It just takes the political power to bring that cleaning to West Dallas and Cadillac Heights.

This is one more reason why the visit of Flint activists Melissa Mays and Nayyirah Shariff is important. These women took it upon themselves to do their own testing, and then use those tests to organize a plan to quit being poisoned. The ways lead can reach inside of you are different in Flint than Dallas, but the result is the same. They have some valuable lessons about how to put the status quo on its heels. This is their first Texas trip. Come out and hear from two hardcore environmental justice advocates.

Recognizing its Black and Brown residents are up to six times more at risk of having high lead levels, Dallas should be more committed to getting the lead out. Failure to do so is just one more legacy of the institutional racism that still scars the city on MLK Day 2017. But it's a failure that can be remedied. 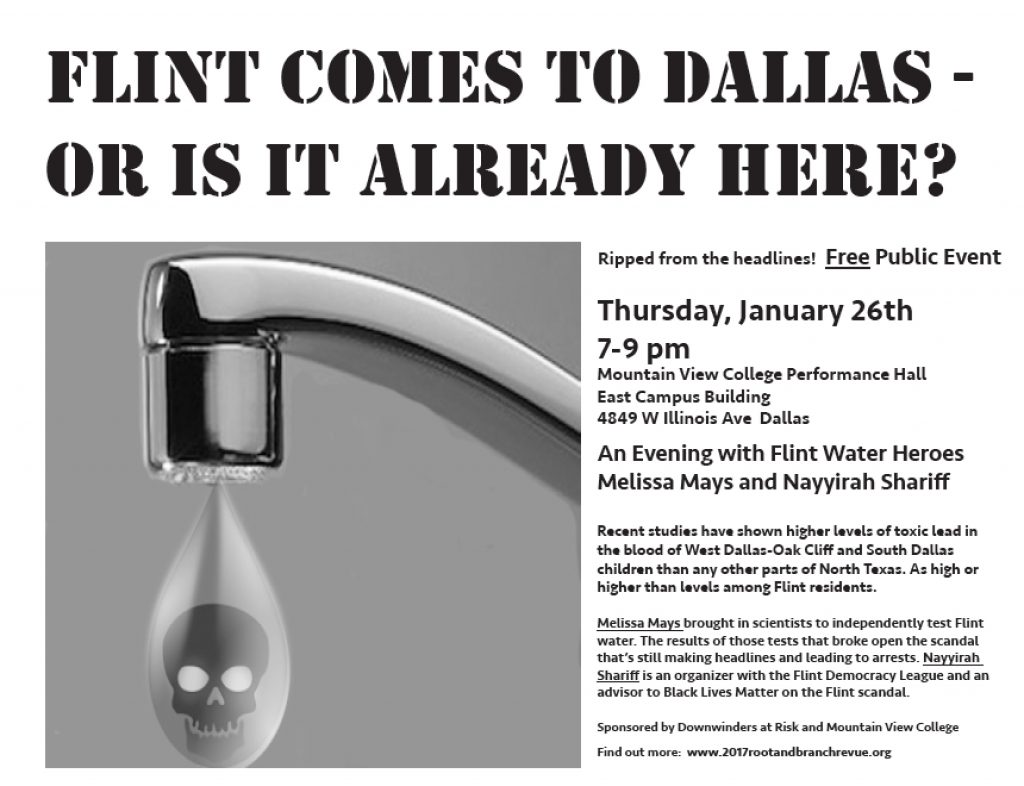