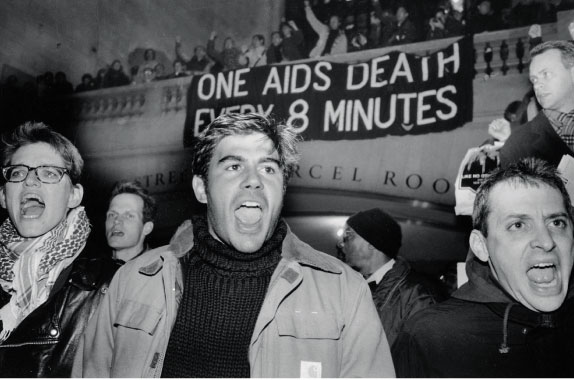 At first blush it might seem strange to recommend Trump-era environmentalists undertake a crash course on Reagan-era AIDS activism, but this review of David France's book in the Washington Post makes a good case.

Frances' “How to Survive a Plague: The Inside Story of How Citizens and Science Tamed AIDS" is based on the 2012 documentary of the same name. Faced with political opposition based on cultural shaming at the highest levels of government using ideological fig leafs, the LGBT community in the 1980's had to fight for the very scientific legitimacy of the disease itself. It then had to organize its own treatment, and fight to fund new research. It had to fight the idea of AIDS as a "gay curse," educate about the new threat to everyone, and remind mainstream America the problem was closer than just the nearest gay bar downtown.

To some of us, that's a pretty good description of the war against climate change activism we find ourselves confronting now.

Just like AIDS deniers, there are climate change deniers. They don't even want to grant the most important fate-changing phenomenon of our times the legitimacy of reality.

At this point opposition to climate change is more cultural than political. It's a middle finger to the pointy-headed scientists and government regulators just looking to make a buck off selling the End of the World.

In the 1980's, survival of the LGBT community motivated a spectrum of responses to an uncharitable status quo. To paraphrase Dr. Johnson, death has a way of focusing the mind. Everything from civil disobedience, to traditional lobbying, to the improbable idea of a giant silent quilt bearing profound testimony on the National Mall. Activists had to fight to even get on the radar of Big Science and Big Government. They did their own science and their own organizing. And from those contentious times grew something remarkable that would flourish and lead to the current status quo – marriage equality, anti-discrimination laws, huge national boycotts pushing back against attempts to re-institutionalize prejudice.

Here's the nut graph of the piece:

"The book is also something of a how-to manual for activism. ACT UP agitators shut down the FDA, blocked access to drugmakers’ buildings, and even placed an enormous condom over Helms’s house. Their efforts built new and lasting bridges among activists, scientists and policy wonks while establishing a blueprint for social change. France was emphatic when he told me that the lesson from the AIDS era is a sweeping one: Against all odds, he declared, “empowerment and victory are possible.” That’s an important one to recall at the dawn of a Trump administration."

Survival is on the line again but there's a President-elect already on record as saying climate change is a hoax. What's the appropriate responses to such a basic level of uncomprehension? We're about to find out, but maybe we could save some time by going back and absorbing the lessons of the people who knew what it was like to fight with everything on the line and no friends in high places.

Posted in Citizen Action, Citizen Science and tagged Activism in the Time of Trump