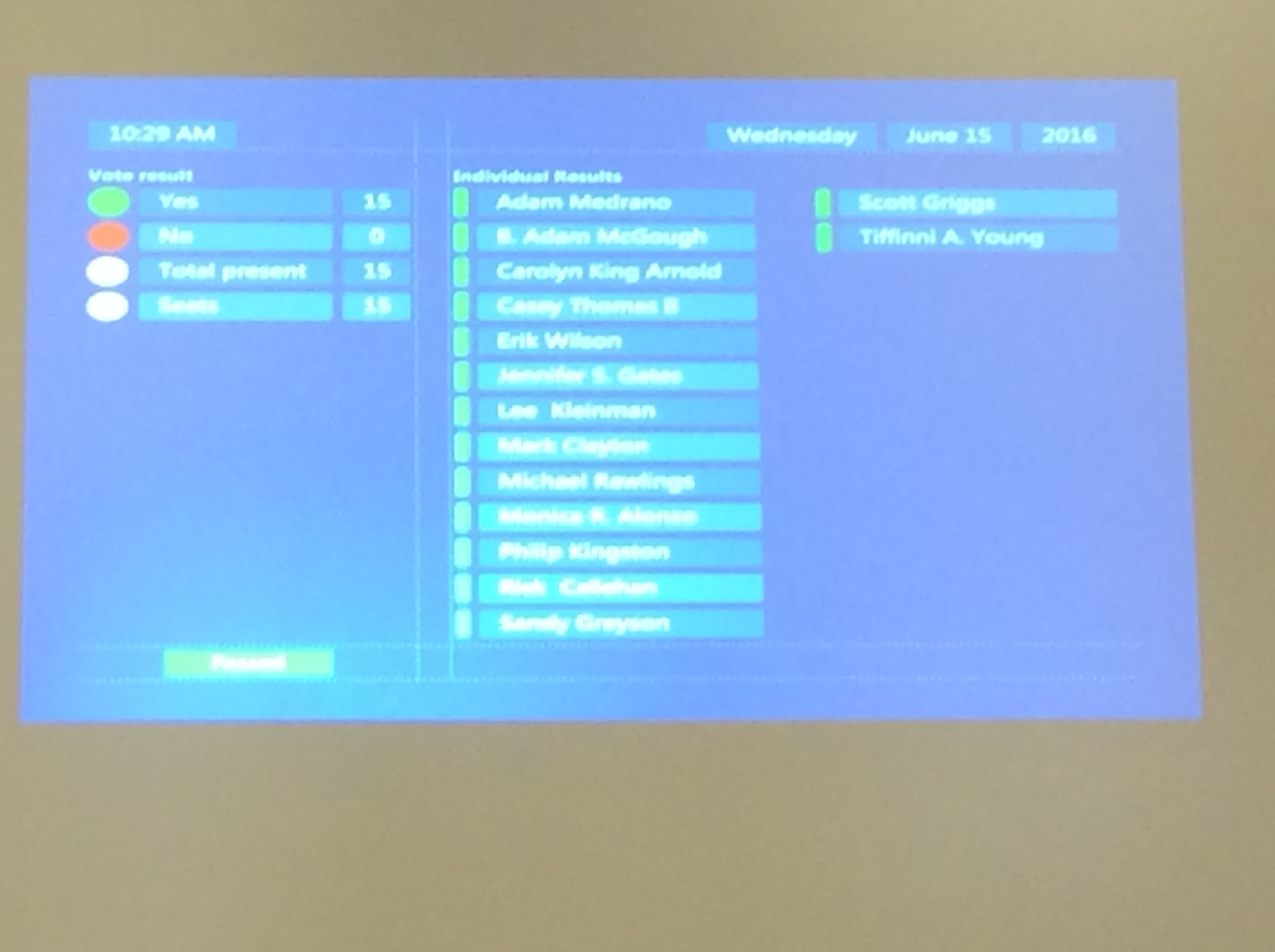 Was it something in the air? Or maybe your emails in their mailboxes?

Sandy Greyson, supported by a citizens army, pulled off the unthinkable and delivered a rousing 15-0 endorsement from the Dallas City Council for her resolution calling for a better smog clean-up plan for DFW than the one the state is currently pursuing.

Despite last-minute objections from coal plant operator Luminant and the Oil and Gas industry lobbying groups, Greyson wrangled the entire city council into agreeing the region can do better than a hands-off approach to major industrial polluters. Dallas County voted in support of a similar resolution in May.

It wasn't quite lions laying down with lambs, but it was close. She secured the votes of stalwart green council members Scott Griggs, Philip Kingston, and Adam Medrono, as well as council conservatives Jenifer Staubach-Gates, Lee Kleinman, Rickey Callahan, and Adam McGough. Southern Dallas members found common ground with their North Dallas peers. Trinity toll road opponents and supporters who don't even speak to each other all spoke in praise of Greyson and the resolution.

It wasn't just the final tally, as impressive an accomplishment as that is, that was shocking. It was all the different succinct points of view used to justify the resolution's passage. Philip Kingston berated the Texas Commission on Environmental Quality (TCEQ) for having morphed into an Orwellian institution, where "Freedom is Slavery, and Smog is Clean AIr." Lee Kleinman cited conservative economic principles to conclude "when a business takes clean air and makes it dirty, it should pay." Carolyn Arnold spoke to her disillusionment with the state over the Columbia meat-packing facility. Jenifer Staubach-Gates' decision was informed by her background as a school nurse.

As the last speaker before the historic vote, Mayor Mike Rawlings gave as good a summary of the tough position the current state strategy is putting local governments as you will hear.  Dallas is stuck in the middle of "a game of chicken" between an inadequate plan from Austin and the requirements of the Clean Air Act. And the intent of the resolution is to put an end to that game and get serious about developing a practical cost-effective way to get clean air. It was the discussion's drop-the-mic moment.

There was also a marked diversity among citizens showing-up at City Hall to speak in favor of the resolution. Latino, black and white citizens joined ranks. Usual suspects Sierra Club, Texas Campaign for the Environment, and Downwinders at Risk, were joined by Mansfield Gas Well Awareness, as well new neighborhood group, West Dallas 1. Despite pre-vote visits and letters, no opponents of the resolution signed-up to speak.

If you ever doubted your emails to city council have an impact, this vote is proof-positive they do. Mayor Rawlings described the campaign leading up to the resolution's passage as a  "textbook example" of how citizens and policymakers can craft progress on important issues, specifically calling out the hundreds of emails he and the rest of the council received, and the methodical process supporters pursued.

Thank you to everyone who took the time to send an email or make or call. You helped make this good thing happen. Everyone gets an "A" in Citizenship this month.

A win in the non-attainment area's largest city would have given the proponents of a new air plan confidence going into other North Texas communities in search of similar resolutions. A 15-0 vote from Dallas turbocharges that effort. This is a strong signal that local governments need to act, regardless of ideology, to protect their own self interests. It will be heard throughout the region by other Mayors and elected officials.

Where do we go next? Good question. Local officials are talking amongst themselves to decide where similar resolutions should be introduced next, but let us know if you're interested in helping us pass one in your city or county.

And, look, if you think this was a worthwhile thing, that we made some kind of progress today, then won't you please consider dropping $25 or more in the tip jar?

We win these victories with scant resources, that are, frankly, scantier these days. We want to keep rolling. Help us keep the wheels greased.  DONATE HERE.

Thanks. Onward thru the smog.