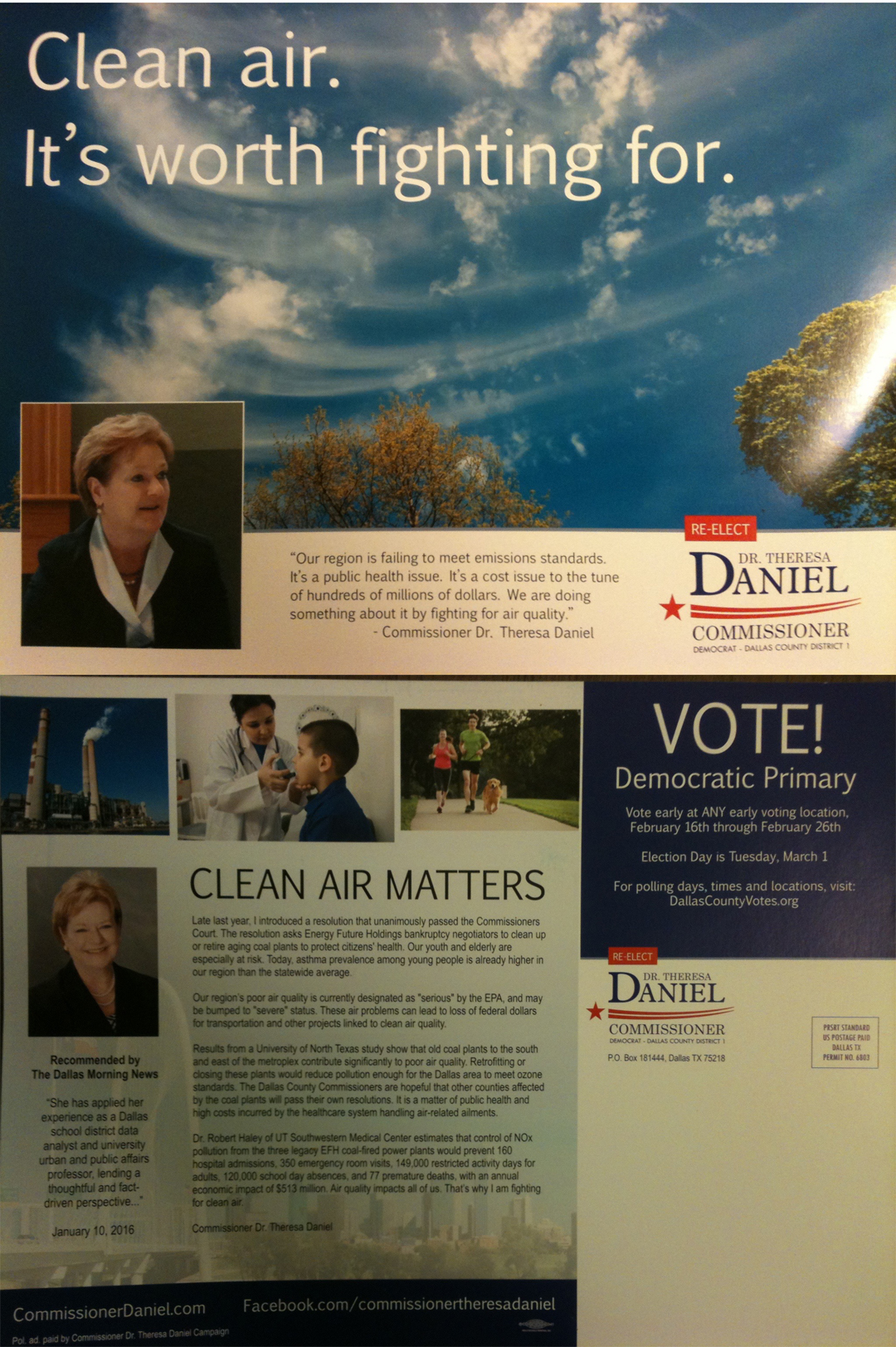 Can you even remember the last time you received a DFW political mailer that spoke about the value of air that won't make you sick or kill you, much less a whole piece devoted to the subject? Neither can we. That's what makes this mailer from incumbent Dallas County Commissioner Dr. Theresa Daniel so welcome.

In an oversized 9 x11 mailer that went to 5 to 6000 households in District 1, under the headline, "Clean Air. It's Worth Fighting For," Daniel states, "Our region is failing to meet emissions standards. It's a public health issue. It's a cost issue to the tune of hundreds of millions of dollars. We are doing something about it by fighting for air quality."

This pairing of issue to elected official is a consequence of Downwinders' Ozone Attainment Project, which produced the UNT study, but also put together a committee of local leaders to oversee it. Former Dallas County Judge Margaret Keliher chaired it. During her time in office about a decade ago, Keliher was the most influential local leader on air quality. She rode roughshod over what is now seen as the most effective clean air plan in DFW's two-decade old struggle to meet clean air standards – the one that came closest to working, however fleetingly. With her institutional knowledge of the issues and process, one of the co-benefits of Judge Keliher chairing our UNT study committee was being able to mentor a new generation of local elected officials on air quality.

Commissioner Daniel was one of the most active and vocal members of that committee. By her own admission, she didn't know a lot about air quality at the beginning, but she kept coming to the committee briefings and learning. Over the last year, she's become more confident in her understanding of the DFW dirty air narrative, to the point of now leading meetings with other officials.

Daniel and her fellow Project Committee member Dallas County Councilwoman Sandy Greyson have become a new dynamic duo for the cause of regional air quality. They represent a brand new wave of local leadership on the issue – one that has been sorely lacking even as DFW sunk deeper into chronic dirty air thanks to a state government that doesn't think smog is that big of a deal. You may remember that Greyson testified at the recent Arlington hearing on the State's do-nothing smog plan, and Daniel sent her Chief of Staff to speak. Had they not served on the Keliher/UNT Committee, it's likely neither would have even known about the event.

Even as they become more active, they're drawing more of their peers into the discussion – County Commissioners and City Council members in other parts of the "non-attainment area."  For the first time in this decade, clean air has some serious advocates at the local level

Downwinders had a plan. We wanted to take away the state's exclusive power over the model that drives all the clean air decisions for the region and educate elected officials about the importance of winning the fight over chronic smog. We not only got an unprecedented study that used the State's own data to contradict it's conclusions about no new controls needed –  we got at least two strong elected officials as new advocates for the cause that were in on that exercise from the beginning.

We didn't know Commissioner Daniel was going to send this mailer out, but it's one more beneficial side effect of grinding things out on a local level.