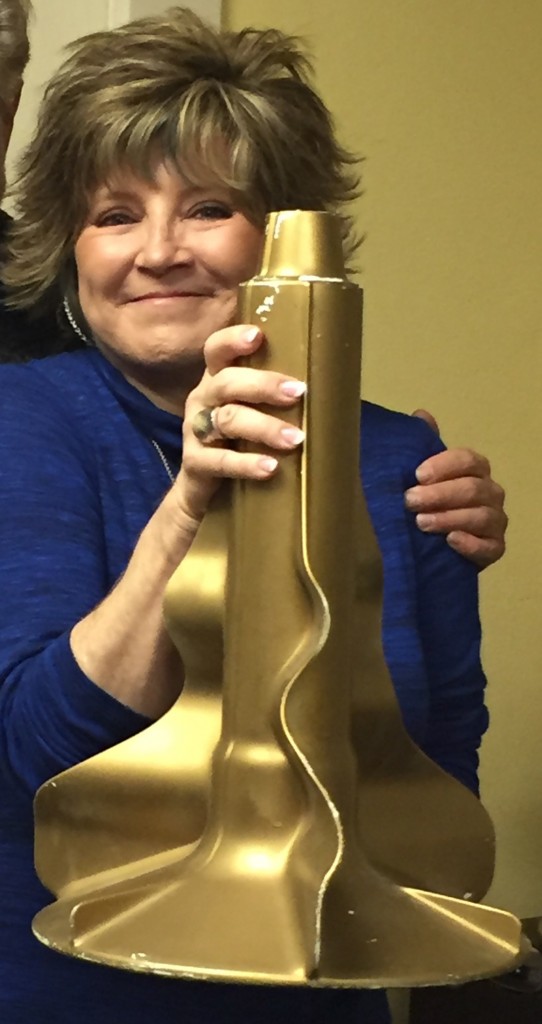 "agitator"
noun
ag·i·ta·tor \ˈa-jə-ˌtā-tər\
Definition of agitator
•  a person who urges others to protest or rebel.
•  a device for stirring or shaking something.

For a long time now, Downwinders has used its end-of-the-year gatherings to recognize special accomplishments among is board members. One of these recognitions is almost as old as the 21-year old group itself, our "Agitator of the Year" award.

Originally created to take back ownership of a word used so pejoratively by our opponents, the exercise has succeeded in becoming an annual institution of sorts, symbolized by the awarding of an actual "bronzed" washing machine agitator. In giving the honor, we explain that just like the actual thing itself, an agitator must shake and stir up things. They must often shake and stir more to get the really deeply-embedded dirt out. And even when  things don't come out 100% shiny, they're always better having been put through the wash.

In 2015, we had no better role model for effective agitation than Tamera Bounds, a new board member from Mansfield, where she's been deeply involved in that city's battle over gas drilling rules for the last three years.

Tamera's Mansfield Gas Well Awareness group took the fight over more protective practices right to the middle of the Gas Patch. While she came up short on getting as much as she wanted, she managed to put the fear of God into the industry, who mounted the largest post-Denton campaign to shut her down, and completely overhauled an obsolete city-drilling ordinance. She and her group of concerned residents forced the last big fight over urban fracking before the passage of HB40.

Not content with that result, Tamera then decided to run for Mansfield City Council in the Spring, directy taking on the town's good ol' boy power structure and running in a town where all the seats are still "at-large" (the Voting Rights Act not having discovered Mansfield on a map yet). Again, she came up short, but advanced her cause among fellow residents and frightened the bejeepers out of the Gas industry.

On the Downwinders board, she became an early advocate of the grassroots conference that would become our Root and Branch Revue. She took responsibility for organizing the first look at a post-HB40 strategy for fracking activists, as well as a the full day of workshops in our "University of Change." These would not have gone as well as they did, or happened at all, without her leadership.

Along with some other key "new-wave" fracking activists, she's now trying to do what should have been done a decade ago and establish a regional alliance of citizen groups who can work together across city limits.

Oh yeah, she does all this while being the president of her homeowners association and performing her full time job as a health care professional who practically offices out of her car.

She's shown herself to be a non-nonsense hard worker whose energy is now indispensable to our Board. She's set a very high bar of productivity that even full-time professional organizers would be hard-pressed to match. She exemplifies the kind of activist who not only tries to win her own battle, but seeks to contribute to the larger fight as well.

That's why Downwinders at Risk's  2015 Agitator of the Year goes to Tamera Bounds with much appreciation and affection. Thanks Tamera, and to all our agitating board members who give their time and energy to shake and stir things up so that they – and you – won' have to breathe air that will make them sick or kill them.