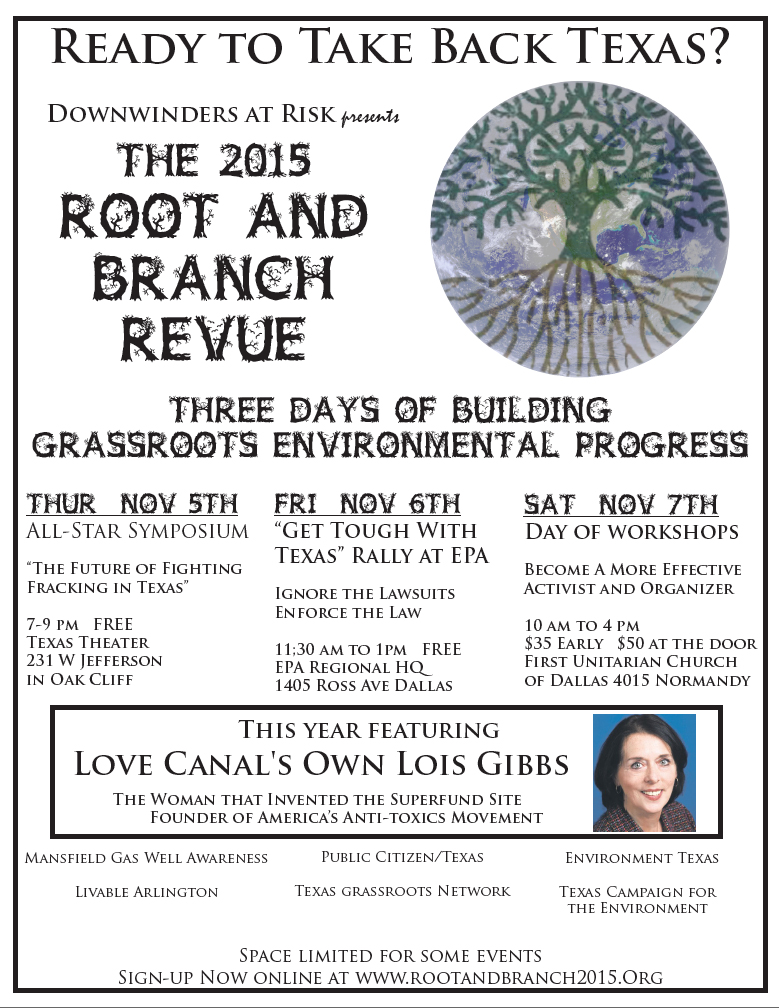 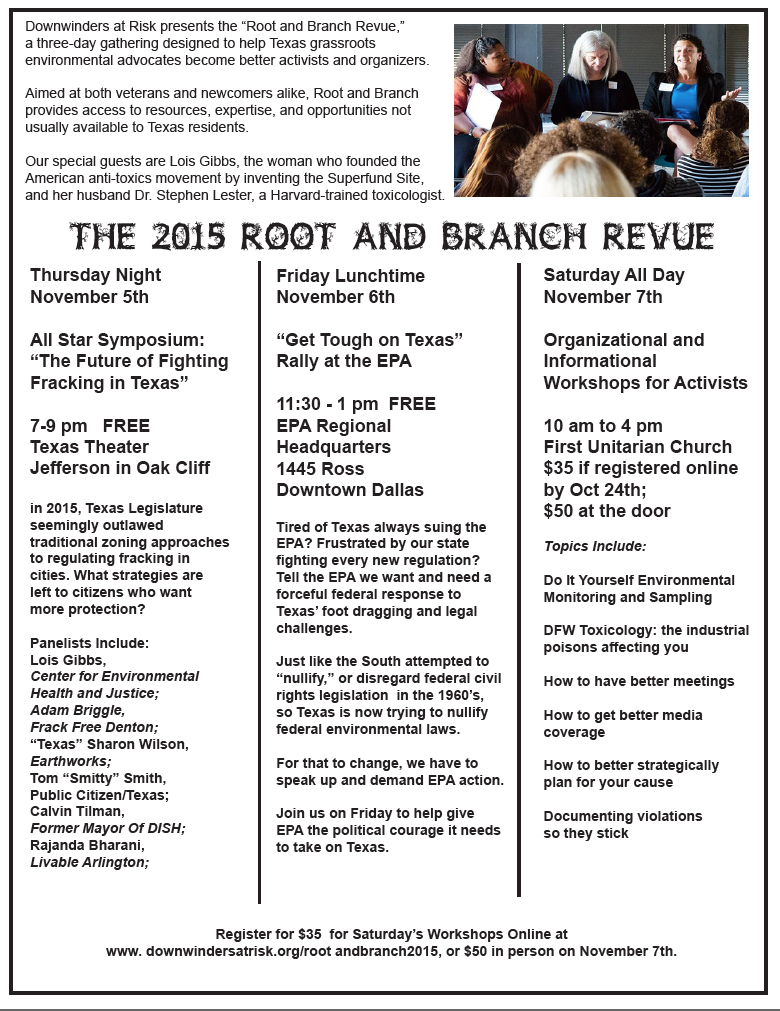 “The SXSW for Environmental Activists”

(Dallas) — Saying their intent is to build a stronger grassroots environmental movement across Texas that can stop the state’s nullification of federal environmental laws and the rollback of rights to oppose large polluters, leaders of the local clean air group Downwinders at Risk announced an ambitious three-day conference in November aimed at honing the skills of Texas' citizen-activists.

Called “The Root and Branch Revue,” the event will feature Love Canal's Lois Gibbs, sometimes referred to as "the Rosa Parks of the Environmental Movement," and kick-off with a panel discussion on “The Future of Fighting Fracking in Texas” that will examine what tools citizens have in a post HB-40 world. Passed by the state legislature this last spring, HB 40 was the controversial bill prohibiting municipalities from using traditional zoning to regulate the location and operation of oil an gas facilities.

Scheduled for Thursday, November 5th through Saturday the 7th, the Revue is actually a rolling collection of events that includes the panel discussion, a lunchtime “Get Tough on Texas” rally at EPA regional headquarters in downtown Dallas, and a full day of workshops that will pass along tips on how to do your own air sampling and monitoring, get better media coverage for your cause, have more effective meetings .

Planners are also talking with the Dallas-based "hyper-local" Bar Politics comedy troupe for a environmentally-themed show as part of the festivities. This is not your typical environmental conference.

"We're billing it as the South by Southwest for activists," said Downwinders' board member and conference coordinator Tamera Bounds. "We want to offer a lot of different experiences – training from experts, brainstorming and socializing with your peers, and a chance to rally at EPA's regional headquarters with everyone else getting the shaft from Austin."

Bounds said Downwinders hopes to make the Revue an annual affair and wanted to kick off the tradition by inviting the original "hysterical housewife" who founded America's anti-toxics movement. “Downwinders and every other group like us can trace our origins back to Lois Gibbs' fight at Love Canal. She’s the mother of us all, and for our first year we wanted to honor that history."

Gibbs’s involvement in environmental causes began in 1978 when she discovered that her 7-year-old son’s elementary school in Niagara Falls, New York was built on a toxic waste dump containing over 20,000 tons of poisons, including Dioxin. Investigation revealed that her entire neighborhood, Love Canal, had been built on top of this dump. With no prior experience in community activism, Gibbs organized her neighbors and led her community in a battle against the local, state, and federal governments. After years of struggle, 833 families were eventually evacuated, and cleanup of Love Canal began. National press coverage made Lois Gibbs a household name and her efforts led to the creation of the U.S. Environmental Protection Agency’s “Superfund,” toxic waste clean-up fund.

In 1980, Gibbs formed the Citizens’ Clearinghouse for Hazardous Waste, later renamed the Center for Health, Environment and Justice (CHEJ), where she currently serves as Executive Director. CHEJ is a grassroots environmental crisis center that provides information, resources, technical assistance and training to community groups around the nation.  It will be the first time Gibbs will be coming to train citizens in Texas. She'll be joined by her husband, Harvard-trained toxicologist Stephen Lester, who serves as Science Director for the Center.

All but a few events of the conference will be free. Saturday's day of workshops costs $35 if you register early, $50 if you don't. And that includes lunch.

You can find out more details, and sign-up for the day of workshops at the conference website: