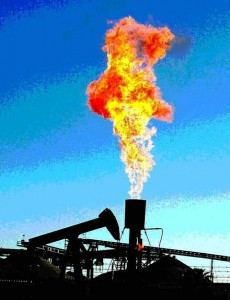 Hot off the presses, the EPA published notice in this morning's Federal Register that Dallas will be the site of one of only three national public hearings the Agency is hosting concerning its proposed rules designed to reduce methane emissions at new oil and gas indusry facilities.

On September 23rd, from 9 am until 8 pm in the Dallas City Council Chambers, the EPA will be accepting testimony from the public, in five-minute increments. You can register for your five minute slot online at www.epa.gov/airquality/oilandgas/ between now and September 18th.

Announced to great fanfare only last week, the rules promise to cut future pollution levels as new equipment comes on line, but does nothing about existing faciltiies – with one important exception.

For metropolitan areas like DFW that host large concentrations of gas pollution sources AND are in violation of the Clean Air Act for their smog pollution, EPA has said that states must address new “Control Technique Guidelines” written by the Agency to reduce missions of Volatile Organic Compounds as part of thier smog-figthing plans for those areas. That's good because its smog-forming VOC pollution like Benzene and Toluene that also makes up some of the most toxic air pollution these facilities can emit. The catch is that the rules give the states a two year grace period.

That means that even though the State of Texas and EPA are wrestling over a clean air plan for DFW right now, and even though one of the major smog-polluting industries in DFW are the 17,000 or so wells, almost 700 large compressors and thousands of other oil and gas facilities in North Texas, those new Control Guidelines will not have to be included in that current plan. But they should be.

If you're going to testify, please be sure to make the request that the EPA and Texas go ahead and include these "VOC CTGs" for non-attainment areas in the current DFW air plan. These are anti-smog measures that are no-brainers in a region which has never been in compliance with the Clean Air Act. And they also mean a total reduction in hazardous air pollution.