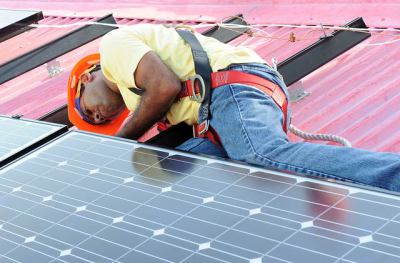 One of the most insincere and transparent memes polluters use these days is their sudden concern for the incomes fo poor folks if government forces them to reduce their pollution (we're looking at you Energy In Depth's Steve Everley). "If you make it harder for us to release our crap (into mostly low-income neighborhoods), energy costs and the prices of consumer goods will increase, taking money out of the pockets of people who need it most."

Ignoring the fact that none of these entities are working on behalf of the poor when they're not making this argument, a new study takes on that argument at face value, and finds, not surprisingly, that it's wrong.

Cutting greenhouse-gas pollution will mean cleaner air and cheaper electricity, according to a Natural Resources Defense Council report that offers a defense of the Obama Administration's Clean Power Plan, the goal of which is to reduce that pollution by 30% by 2030.

In this scenario, it's the owners of obsolete and dirty coal plants that are making the case that making them cut back on planet-wrecking pollution would cause their facilities to close down or add costly controls, resulting in the loss of jobs and higher electirc bills.

But according to the EPA, the initiative will actually cut electric bills by 8 percent and the NRDC study concludes it will create as many as 274,00 jobs in energy-efficiency projects, not to mention new renewable energy positions.

NRDC's numbers show that the country is at a tipping point now where the costs of efficiency and renewables are cheaper to tap into than traditional fossil fuel power sources. It notes the operator of the nation’s largest power grid, "PJM Interconnection" found that generating 30 percent of the electricity in its region from renewable energy sources could save consumers up to 30 percent on their bills.

That conclusion echoes the 2013 report by Daniel Cohan, released by the Dallas County Medical Society in its unsuccessful bid to petition the Texas Commission on Environmental Quality to close Luminant's three older East Texas coal plans. It found that when the costs of becoming a modern Clean Air Act-abiding facility was factored in, the per kilowatt rate of electricity from those dirty coal plants made renewables like wind and solar competitive, and efficiency cheaper outright.

Our energy menu is now much bigger than "nukes or coal." One of the bright spots of the early 21st Century is that we're living in an age when non-fossil fuel alternatives really are a viable market force, in part, because they can not only help reduce the pollution in our air, but also take less of a bite out of our monthly budgets. And for those among us who spend a larger percentage of their budget on basic needs like heating and cooling, this is good, green news.