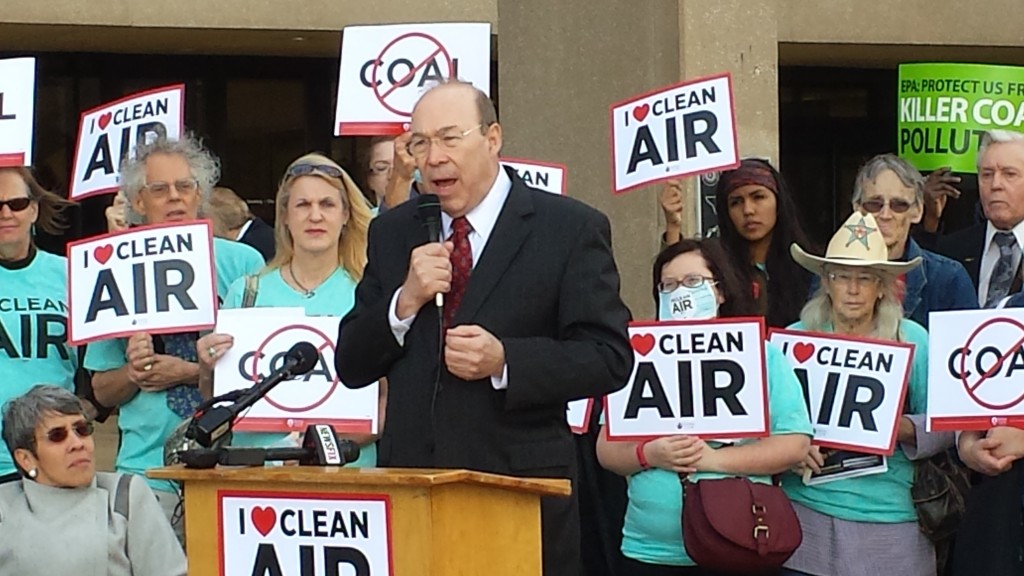 One of things about basing your health or exposure standards on science is that as research gets more sophisticated, the standards tend to get revised, usually downward. The more you know about how a substance affects the human body, the more subtle the health effects you discover. This has happned most spectacularly with substances like lead and benzene, but it's also happened routinely with smog, or as it's know in government regulations lingo, ozone.

Unlike those other chemicals and substances however, the Clean AIr Act says standards for ozone exposure must be reviewed every five years to see if they're keeping up with the science. Standards must be protective fo public health. If new research discovers they're not, then they must get lowered. It's one of the most progressive and pro-active enforcement mechanisms that was included in the Act in a series of 1991 amendments.

As a result, in the past 20 years, the levels of ozone that were believed to be "safe" have come down dramatically as the science has gotten better. In the mid-1990's, an area wasn't out of violation unless it had over 125 parts per billion (ppb) of ozone as a one hour average.  Dallas-Fort Worth more than matched that level, sometimes seeing one-hour readings as high as 135 ppb an hour. North Texas was out of compliance with the standard the moment it was passed.

As more research was published, scientists saw health effects at lower levels of smog exposure and so the standard was changed, as well as how it got measured. in 1998, the one-hour standard was tossed out and an eight-hour average began being used to reflect more realistic exposure patterns. And instead of 125 ppb, the number came down to 85 ppb.

Since 2006, the EPA panel of independent scientists in charge of those five year reviews mandated by the Clean Air Act have been concluding that the standard needed to come down to an eight-hour average of 60 to 70 ppb. But politics has interfered twice in trying to reach that goal. During the last Bush Administration it was brought down to only 75 ppb, where it stands now, and immediately before the 2012 elections, the Obama administration delayed another review that might have brought a lower number.

Now the process is cycling back and once again the EPA's own panel of researchers has recommended an ozone standard of 60 to 70 ppb. The EPA is said its looking at a range fo 65 to 70 ppb. Because the regulations haven't caught up with the science yet, it means, according to a new series of articles published by the Center for Public Integrity that,

"… people in a wide swath of the country breathe air that doesn’t violate any rules — and thus doesn’t trigger any warnings — and yet, according to research, is unhealthy."

There's no better example than DFW to demonstrate this behind-the-curve approach. Even while the state is in the final stages of submitting a new clean air plan for the region aimed at reaching the Bush Administration-era 75 ppb standard (by doing nothing but waiting for cleaner federal gasoline mandates to kick-in) the EPA acknowledges that number is obsolete and should come down to protect human health. Yet the state isn't penalized for not aiming lower, and isn't rewarded for reaching a lower number sooner than the deadline of 2018. The two tracks of regulation never intertwine, as if they were regulating two different kind of air pollution. In effect, government is blessing another half decade of unhealthy air in DFW.

Despite this lenient strategy it will come as no surprise that the State of Texas is fighting the current proposed revision downward in the ozone standard. It's at least consistent. Texas has always fought the lowering of the smog standard. Had it been up to Austin, we'd be living with the 125 ppb levels of 20 years ago – the smog equivalent of smoking two packs a day. As part of its look at the politics of ozone, the Center for Public Integrity's journalists spotlight the the Texas Commission on Environmental Quality's efforts to use industry researchers to make its case the standard is just fine where it is. One of the few pieces of good news is the involvement of local physicians with the Dallas County Medical Society stepping up and taking on Austin over its stance. Dr. Robert Haley of UT-Southwestern has become a well-known opponent of the TCEQ in his and the Medical Society's battle over the East Texas coal plants.

As the Center's articles indicate, court battles are an inherent part of the fight for better standards. Often environmental groups have had to sue the EPA to get the agency to implement the standards recommended by its own panel of scientists. Often, the EPA like it that way, because then it can say it was forced to lower standard by the courts instead of on its own. In Texas, with the submission of a state plan for DFW smog that many feel doesn't meet the Clean Air Act requirements for new controls, a court challenge could be facing the the EPA for the first time in a long time if it approves Austin's lax approach to providing safe and legal air to over six million residents.

The Center's articles are required reading for anyone trying to understand how the machinery of government works both to advance and retard the protection fo public health from a very basic threat. For DFW citizens, they could be a primer for an upcoming fight.