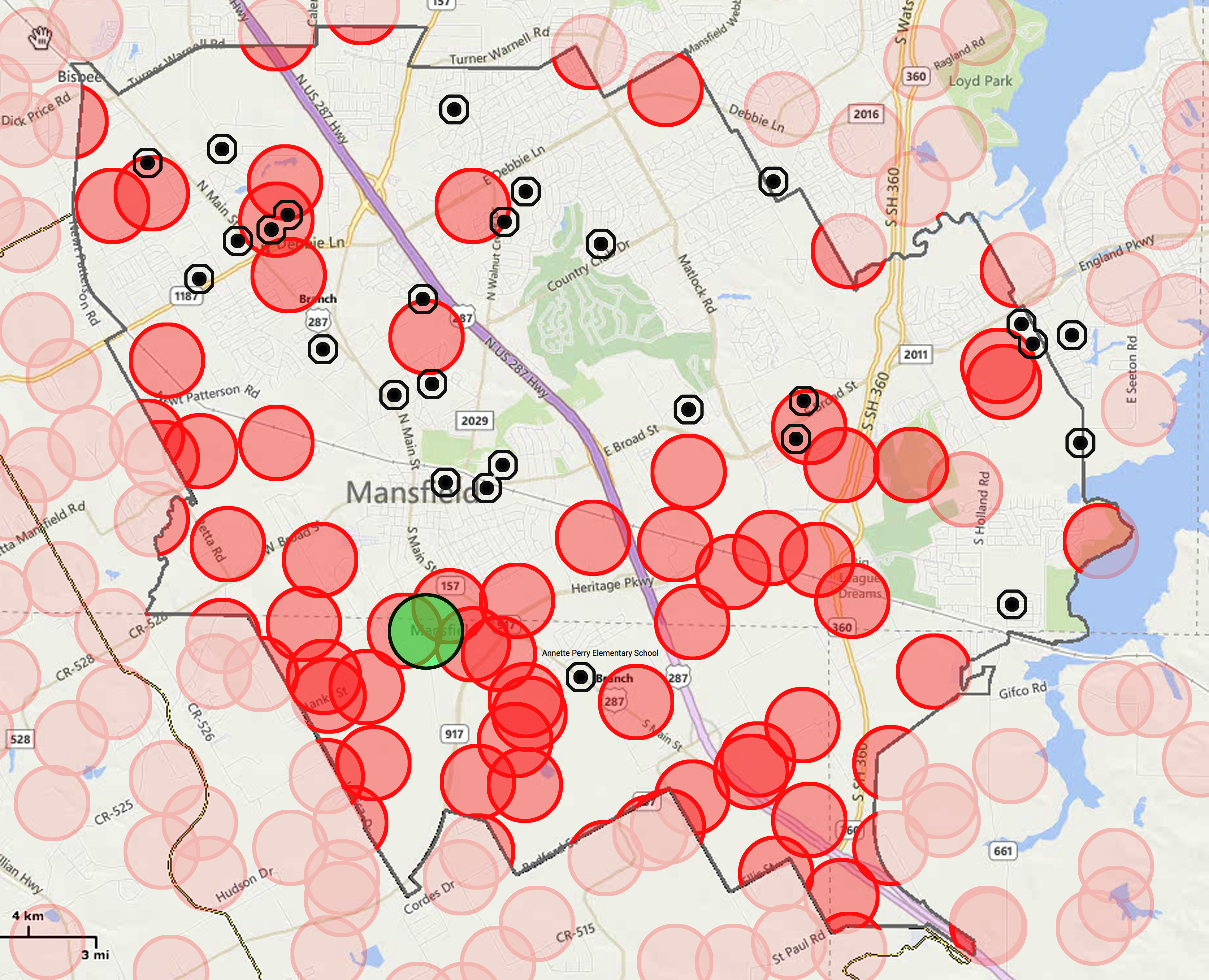 The green dot is a 1500-foot radius around a medical waste transfer station. The red dots are 1500-foot radiuses around gas wells. The black dots are schools. Guess which dot the City Council and School Board are outraged about?

In the art of slight-of-hand, there's a classic maneuver called misdirection. It's when the trickster forces the attention of an audience to focus on one thing in order to distract its attention from another.

In 2015, the largest, most egregious act of political misdirection in North Texas is taking place in Mansfield. With its 60,000 residents surrounded on all sides by 200 plus gas wells, emitting tons of toxic air pollution in the middle of residential neighborhoods, and next to schools and parks, official outrage is focused on the siting of a single medical waste transfer station that will release…no toxic pollution at all.

Oh, the Redaway transfer station application has lots of salacious wording. It will take in tons of "animal waste, bulk blood, bulk human blood, bulk human body fluids, microbiological waste, pathological waste, sharps, and other health care-related items that come into contact with body fluids and/or blood) and non-hazardous pharmaceuticals." Nasty stuff. But it will take this waste, put it in one of three large steam autoclaves, sterilize it, and ship it out to be buried at municipal solid waste landfills elsewhere. All inside an enclosed structure. This isn't a disposal facility. This isn't an incinerator. It's a place where medical waste comes in, gets Martinized, and then gets shipped back out.

But wait, there's tons of storage and up to 50 trucks a day of come and go traffic. What if this is near a neighborhood or upwind of schools? You'd want this kind of facility far away from people. Like in an area zoned for industrial uses. Which it happens to be located in. The nearest school is over a mile away, the nearest residential neighborhood almost as far.

Yet even this distance is way too close for comfort for the City Council and School Board. They don't even want the transfer station in the city limits. For these officials, there's no setback far enough to be safe from the dangers of escaped body parts. They're outraged. They've passed resolutions condemning the facility. They've even protested to the Texas Commission on Environmental Quality!

What exactly is the public health threat posed by the transfer station? It's not air pollution. The steam autoclaves emit so little pollution they aren't even required to have a permit. Nor is it water pollution. Everything drains into the city sewer system. It's the perceived threat of icky stuff like body parts and animal wastes and the accidental contamination from HIV-infected needles that fall off the trucks. In an industrial park. A mile away or more from the nearest school or neighborhood. Behind a fence, inside a building.

Meanwhile there are 206 gas wells strewn throughout the city, emitting half a ton, a ton, or maybe more air pollution a year depending on the age, design and activity. Carcinogens, Mutagens, Endocrine Disrupters. Many of these wells are within 1500 feet of neighborhoods and schools. Some are within 600 feet – the current setback required by the city. Some schools and neighborhoods are within 600 hundred feet of multiple wells. These wells routinely release toxic pollution. These wells pose a threat of accidental release or explosion or fire.

So let's review. According to the Mansfield City Council and the Mansfield School Board, even though there are no emissions, and no disposal activity, and it's located in an industrial park, there's absolutely no appropriate distance between the medical waste transfer station and any neighborhood or school in the city. 600 feet, 1500 feet, 5280 feet – it doesn't matter. There is no such thing as a safe buffer zone from this facility. Zero tolerance.

On the other hand, 600 feet is more than a safe distance for proximity of neighborhoods and schools to heavy industrial activity that drills deep holes in the ground, pumps thousands of gallons of toxic chemicals into those holes under pressure, forces underground explosions and then tries to contain and process the resulting releases of gas and liquid coming back up through those holes. 600 feet is OK for constant exposure to toxic chemicals at "low levels." 600 feet is an appropriate distance in case of serious accident, because you're only dealing with highly flammable and explosive substances, not gross human blood.

Now, the more cynical among us would claim that this official misdirection is due to the fact that the city, school system, and property owners aren't getting a percentage of the tipping fees for the tons of waste passing through the transfer station the same way they're getting royalties from those hundreds of gas wells. Take the money out of the gas wells and they might not be allowed so close to people. Let the medical waste station cut property owners in on the action, and it too might be welcomed as a jobs creator.

But by any objective test of current and potential threat, gas wells trump the medical waste facility. Just one gas well pumps more pollution into the atmosphere in a year than the transfer station will in a decade.

On Monday night the Mansfield City Council will have its "second reading" for its proposed updating of the town's gas drilling ordinance. Concerned residents will continue to push for longer setbacks from homes and schools than the existing 600-feet the new ordinance reaffirms. They aren't asking to kick gas wells out of the city, the way the city is with the transfer station. They're just asking for the same level of protection afforded other North Texas towns like Dallas, Southlake and Flower Mound.

Setbacks are crucial because they're one of the few proactive measures that can be taken to avoid harm from a gas well or compressor, rather than reacting to it after the fact.

Longer setbacks prevent as many people from being exposed to as as much pollution, both routine and as a result of accidents, leaks and "blowdowns." The more distance there is between people and heavy industry, the fewer risks to public health. Fewer respiratory problems. Fewer nose bleeds. Fewer cancers. Fewer birth defects. Longer setbacks are a reasonable response to the science in 2015.

But the city and school board are holding fast. Zero tolerance for body parts. 600 feet for toxic pollution. That's why it's important for concerned residents to show up on Monday and call BS on this hypocrisy.

During the month long Ebola panic in the U.S., not one citizen died of the disease that dominated the headlines. However, if statistical evidence from the CDC is to be believed, probably close to 600 people died from the flu during those same four weeks. Which was the greater public heath threat?

There is something truly frightening in the medical waste application. It's the breakdown of land use within Mansfield. As it turns out, the city is "28.6% residential , 3.7% commercial, 3.7% industrial and warehouse, 4.9% parks, 4.3% public/semi public, and 13.3% gas wells and rights-of-way." Gas drilling now takes up more land use in Mansfield than all the commercial, industrial and park property combined. With 300 more wells to go, the city is looking more and more like a large industrial park with pockets of residential development instead of the other way around.

But don't worry about that. Be concerned about the building in the corner of the industrial park steam-cleaning blood, needles and body parts.