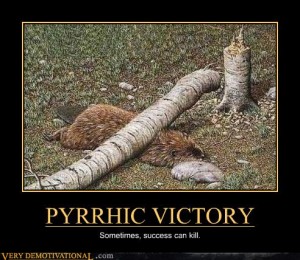 Because there's been no public polling, it's impossible to know which side is leading in the Great Denton Fracking Vote of 2104 going into Election Day. Indications here and there in news coverage give hints that internal polling by industry shows them behind. But before the count begins tonight, one gets the feeling that even if the fracking industry wins, it still loses – that this will be a totally Pyrrhic victory.

It has only itself to blame. It raised the stakes so incredibly high, went so over-the-top in its opposition, that even those who might sympathize with some of its arguments can't stomach the bullying tactics used to defend them.

If, after spending almost a million dollars, becoming Chicken Littles of economic disaster, and recklessly throwing around libelous claims of secret Russian influence, it should win, it will be akin to The Hulk beating up a ten-year old near-sighted Boy Scout. But in setting-up such a mismatch, don't be surprised if you create a lot of backlash sympathy for the near-sighted Boy Scout. Everyone loves an underdog.

Attempts to equate "a DC-based environmental group's" in-kind contributions to Exxon's dump trucks of cash are laughable and wholly ineffective. Of the two sides, only the industry has made this a national rallying cry and given it a symbolism way out of proportion to its actual impact. Only the industry has made it an ideological fight for the ages. Locals have effectively kept it an us vs them community fight, with corporate out-of-towners as the villains. That's a perspective that tends to unite voters of a variety of hues.

So if the industry wins, the reaction will be of course it did. It bought the election. It used a Howitzer to swat a fly. Another example of raw corporate power in an age marked by its abuse. It won't have proved anything other than it can spend a lot of money driving a grassroots-driven initiative into the ground. Hooray for Mr. Burns!

From a practical standpoint, it will not have won them any new allies and, from all indications, made the Denton City Council as a whole even more anti-fracking and pro-ban than it was this summer. From here on out, it'll be a tough slog for any company that wants to drill a new gas well in town and development around older wells will be put under an electron microscope that might result in some precedent-setting zoning regulations.

Next May, long after the high-paid political consultants and corporate checks have deserted Denton, and with fewer Greg Abbott partisans showing up, they'll be a municipal election which will serve as a second referendum of sorts, where the effects of the last six months of grassroots organizing will be revealed in even higher relief.

And what if the near-sighted Boy Scout wins? Well, because the industry has set this up has a national test, that will be magnitudes more embarrassing and newsworthy than if the predictable purchasing of votes happens. It will be a Goliath-killing rebuke. It will spawn panic in boardrooms in Dallas and Houston, and back rooms in Austin. It will force State Representative Phil King to awkwardly explain how local control is OK for Texas when it comes to rejecting EPA regulations, but is absolutely wrong when it comes to cities rejecting the state's incestuous non-regulation. It will further paint the industry and their bought-and-paid for mouthpieces into a corner where their position will be: the less democracy, the better. That is not a winning strategy in the long run.

Regardless of the vote count tonight, it's hard to see the fracking industry emerging better off than it was when this whole thing started. And it only needs to look in the mirror to place the blame for that PR failure.