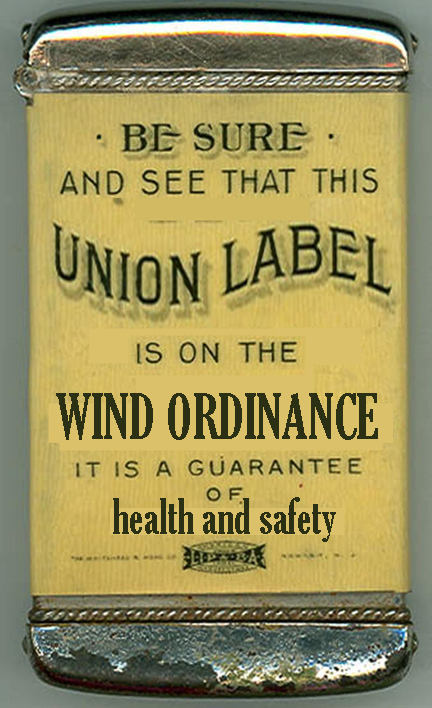 There's one population of victims of industrial pollution that often has it even worse than those who live downwind: those that work within.

Groups like ours make it their business to represent the interests of "frontline" residents who live adjacent to, or in close proximity of, places that routinely release crap in the air that affects their health and well-being. Collective action is promoted as a way to address that situation and, in our experience, it works more often than not. At its essence then, Downwinders is a kind of union of pollution victims.

Local residents who decide to step out of line and speak out against the facility's pollution are often ridiculed, threatened, and ostracized. Especially in small towns where the facility is among the largest employers or taxpayers. Because of the interconnections and economic ripple effect of such facilities, some activists get warned about losing their jobs even though they may not work for the offending company itself.

Imagine then the pressure on workers inside the facility whose very livelihood rests on their silent consent.  Despite a constant stream of studies showing exposure levels for employees of polluters at many times the levels of those outside company property, they have no collective means to help them relieve their condition. Except for unions. Which means in Texas, they usually don't have any recourse at all.

Lack of union representation for these workers not only diminishes their job security, it means they're much less likely to be willing or able to help those outside the fence line who are also being shat-on. They're on their own, with no organizational backing. They have no access to collective action. In many ways they're less powerful and have fewer options than those getting doused in their own homes across the street from the company. Sometimes they ARE the people in those homes and get it coming and going.

When there's no union, there's much less chance of any kind of meaningful dialog between activists and workers, even though they may share the same concerns and be affected by the same pollution. There's one less ally for activists to recruit in seeking more effective pollution controls or cleaning-up a site. The flow of information about what's really going on inside the facility is circumscribed. Industrial polluters stand a better chance of holding out against change if they can keep those on either side of the fence line from joining forces.

On the other hand, some of the most effective pollution control measures among Texas Gulf Coast refineries and chemical plants are the result of strong unions with the ability to collectively bargain for change. In countries with a longer and stronger union movement, it's the "Labor Party" that usually voices the loudest support for environmental progress.

Unions aren't perfect. They can become as bloated and neglectful as any corporation. They can stifle progress by parroting the wrong-headed notion that less pollution means less jobs. But they're the only counterweight to corporate power within the facility because they can affect the bottom line with a slow down or strike – more potential power than activists often have after years of organizing. If you're an environmental activist, it's in your own self-interest to promote unions.

Likewise, if you're a union representing workers who are getting poisoned, it's in your own self interests to put pressure on the company or industry to clean-up its act by working with environmentalists who can exert their own kind of pressure for action.

That recognition of mutual self-interest is the driving force behind such efforts at the Blue-Green Alliance that merges unions like the Steelworkers, UAW, CWA, and SEIU with the Sierra Club, Natural Resources Defense Council, and, appropriately enough, the Union of Concerned Scientists, into a broader coalition working for climate change action. By working together, they can anticipate and head-off the sudden jerks of unemployment that would happen as we transition off of fossil fuels to a greener economy.

There's a long proud history of unions lending their power to social causes beyond the factory gates. Many were important in bringing the civil rights movement out of the South and making it a nationwide litmus test for elected officials. But that was when there was still a strong labor movement in the US; when the president of the UAW or Mineworkers Union were regular White House visitors, no matter which party was in power.

In Texas, a "right to work" state, unions often have the stigma of Leper colonies. They're used as political fodder for Republican candidates swearing they're the first step toward socialism, while being held as arm's length by Democrats for fear of being tainted with a "pro-union" label. Texas environmentalists are in a position to demand better.

Thirty years ago the observation was made that a conservative was just a liberal who'd been mugged. These days in Texas, thanks to fracking, an environmentalist is often as not a conservative who's been gassed. Many of those most affected by the oil and gas industry in North Texas and elsewhere are "dittohead" true believers, but also feel portrayed by officials who have traded their conservative credentials for campaign donations.

After a certain amount of abuse it's not hard for these right wingers to realize that they must organize themselves into collective action on behalf of their communities if they want to keep from being completely run over by companies that don't give a damn. Is it really that far a leap in logic to believe the same principle is true for workers who feel just as disposable to the same company?

Those that come to environmentalism through their own liberal values must reach out and make unions a part of the natural landscape. Just as Greens need to adapt by becoming more racially and economically diverse, so we must become more insistent that unions are an integral part of the change we're seeking. They can make our job a lot easier.