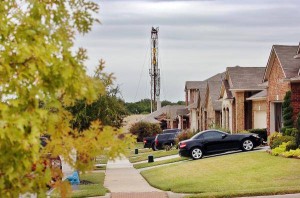 We only have 9 days to protect what it's taken us at least the last 12 months to build. The final Dallas City Council vote on a new gas drilling ordinance will take place on Wednesday, December 11th.

If you've come to City Hall on this issue recently, thank you, but we need you to show up again in the next two weeks and make sure our previous victories remain intact.

If you haven't shown up yet, or it's been a while, we really need some fresh faces to speak up and support the strongest ordinance we can get.

The 1500-foot buffer zone between drilling and compressor stations and neighborhoods.

This 1500-foot "setback" was supported by a 14-1 vote of the City Plan Commission in its recommendations to the City Council. It applies not only to gas drilling sites, but to large compressor stations too.

Yet at least six city council members (Jerry Allen, Sheffe Kadane, Vonciel Hill, Tenell Atkins, Lee Kleinman, and Rick Callahan want to rollback that distance to allow drilling and compressor stations within just 1000 feet of neighborhoods and schools, and with "variances," as close as 500 feet.

Recently, old wells were activated in Denton that are as close as 600 feet to homes that were built since the leases were granted. According to press coverage last week, "residents in the Vintage neighborhood were not happy when they noticed "vibrations, noise and glare" about 600 feet from their homes…."

The disruption was so great that the City of Denton sued the gas drillers. "The actions of the Defendants are causing immediate and irreparable harm," the city's lawsuit said.

This is the kind of heavy industry these six city council members want to bring to Dallas neighborhoods, and they'll succeed if they can get Mayor Rawlings, Jennifer Gates and/or Dwaine Caraway to agree with them.

The rest of the council has made up its mind. It's the six backers of industry listed above vs. the six council members who voted to reject the Trinity East permits (Scott Griggs, Philip Kingston, Monica Alonzo, Adam Medrano, Sandy Greyson, and Carolyn Davis). Any motion needs 8 vote to win.

That's why these three Council members – Mayor Rawlings, Jennifer Gates, and Dwaine Caraway –  will determine whether Dallas gets a more, or less protective gas drilling ordinance.

Mayor Rawlings has gone on record as opposing gas drilling in Dallas on principle. He's also gone on record saying he'd support the CPC recommendations. We need to make sure he keeps his word. He should be leading the charge for the most protective ordinance we can get.

Jennifer Gates ran on a platform of keeping drilling out of neighborhoods. We need to remind her of that and that she too needs to be leading the fight to keep the 1500 foot setback.

Dwaine Carway needs to be reminded that gas drilling is an environmental justice issue that will disproportionately hurt low income and minority areas of Dallas.

WHAT YOU CAN DO TO HELP:

1) Attend one or both of the next City Council meetings and ask the Council to pass the draft gas ordinance that the City Plan Commission recommended, including the 1500 foot setback.

2) If you haven't already, click here and send the Mayor a quick "click n' send" e-mail asking him to keep his word and support the Plan Commission recommendations iin total, including the 1500 foot setback. Please do this asap.

(We've added the e-mail addresses of both Jennifer Gates and Dwaine Carraway to the message to make sure they know how you feel.)

3) Contact Mayor Rawlings, Jennifer Gates and Dwaine Caraway on your own:

4) Stay Tuned. They're more actions being planned leading up to the 11th so you can express your support for a strong ordinance. Keep on the lookout in your e-mailbox for alerts and on line here on the Downwinders' blog.

Scientific Support For a 1500-foot Setback

The 2012 Colorado School of Public Health study of cancer and non-cancer risks in the gas field, entitled "Human health risk assessment of air emissions from development of unconventional natural gas resources." This study concluded that residents living within a half-mile of a gas well had a 66% higher incidence of cancer than those living further away from a well.

The 2013 Emory University study found the risk of developing non-Hodgkin lymphoma increased among those living in proximity to facilities that release benzene. Natural gas facilities can release a lot of Benzene.

A 2012 report from Cornell University found that a mother's exposure to fracking before birth increases the overall prevalence of low birth weight by 25 percent.

Another 2012 Cornell University study that focused on animal health in the gas field concluded that reduced milk production, gastrointestinal, neurological, urological issues and sudden death are just a few of the symptoms experienced by livestock living near natural gas fracking sites.

Dr. Vikas Kapil of the National Center for Environmental Health at the U.S. Centers for Disease Control and Prevention gave a presentation in January 2012, saying "We do not have enough information to say with certainty whether shale gas drilling poses a threat to public health."

In addition, the Army Corp of Engineers recommends a distance of 3000 feet between structures like dams and levees and gas wells because of the danger of vibrations to structural integrity. If this distance is good enough for a dam, it's good enough to protect a home's foundation.