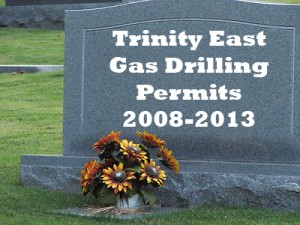 A secret back room deal between City Hall and gas driller Trintiy East that was once described as "a done deal" by City Council members is indeed finally done. As in done-in. As in dead as a door nail. As in exploding zombie-permit head dead.

Thanks to an organizing campaign by the most successful citizens coalition in recent Dallas civic memory, the deal that Dallas City Hall could not possibly be stopped, was. Cold.

Wednesday afternoon the Dallas City Council could not find the votes to override the City Plan Commission and so gas drilling leases thst were signed in 2008 will now go unexploited in Northwest Dallas along the banks of the Trintity River.

It only took nine months of breathtakingly hard work, two Plan Commisison votes on either side of a "reconsideration" vote, a city election, disclosure of a secret memo, a city Manager resigning, a short film, fighting off a staff that wanted to steamroll us, hundreds of residents showing up month after month in person at multiple hearings, even more residents sending in letters, e-mails and phone calls to the members of the Plan Commission and Council, and a funky piece of butcher paper that turned into one of the most iconic images of the fight.