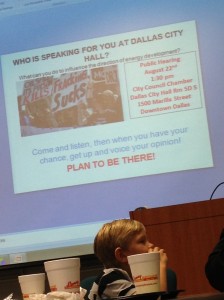 Well lookey here, Ol' Smokey Joe himself was out trying to fire-up the troops in the oil and gas industry yesterday at the monthly meeting of the Dallas chapter of the Society of Petroleum Engineers.

The theme of the talk was "Hydraulic Fracturing: Shattering the Radical Environmental Lobby, Unlocking America's Energy Future" and a lot of the time was spent trying to convince the audience they needed to show-up at today's Dallas Plan Commission public hearing on a new gas ordinance  to counter those wacky citizens who think living immediately next door to a billowing plume of diesel smoke and dust is a bad idea. Of course, having not attended any of the commission meetings for the past year or so when the topic has come up more than once or twice, their slide show didn't have any real pics of Dallas residents, so they had to use pics from demonstrations elsewhere, like the one above. Tsk, tsk,

It's also a big stretch to tie the "Radical Environmental Lobby" to what's been going on in Dallas, where there's been no serious mention of a moratorium or ban on drilling, and leading opponents have been members of the Dallas Homeowners Association. But for Joe Barton, the World Wildlife Fund is a Radical Environmental Group.

Audience members were told to come to the hearing at 1:30 pm, but to make sure they spoke last, and "were not polite."

Apparently, citizens have been doing such a good job in Dallas that the industry is now concerned about setting "bad precedents" that won't allow for any drilling in Dallas at all, like the 1500-foot setback that is one of the major issues in contention today. 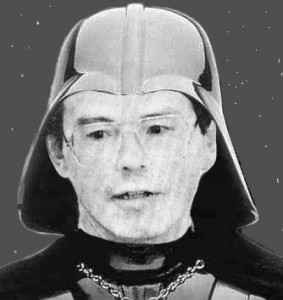 You should always use your opponents reactions to events to judge how well you're doing. From the pleas coming from Barton and others yesterday, it's clear Trinity East is out trying to portray itself as some kind of corporate martyr for the cause. They're trying to elevate the Dallas debate over new gas regulations into a proxy for the national fight over fracking. It's a good sign when your opponent begins to panic like this, but it's also a warning that your effectiveness is now under attack.

And if Smokey Joe's entreaties aren't enough to get you down to City Hall this afternoon, what about the official debut of new Dallas City Councilman Philip Kingston at the 1:00 pm citizens press conference planned right before the hearing's start? Kingston was elected with the help of many of the same citizens that will be showing up today to testify and has pledged to help write a much stronger gas drilling ordinance.  He joins Scott Griggs as leading critics of the Trinity East deal and attempts by the Mayor and Industry to soften the new ordinance.

Industry is getting organized, shouldn't you too? Meet us downtown at City Hall today at 1pm for the press conference and then stick around to say a few words to the Plan Commission on what you want to see in a new gas drilling ordinance.  If you can't join us in person, follow the Plan Commission meeting and hearing on the Downwinders' FaceBook site, where we'll be live-blogging the day's events.