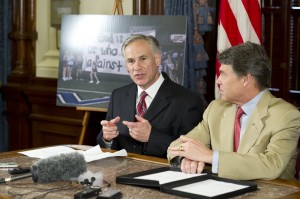 There was never really any question, but just in case you were wondering, EPA will indeed be taking over the permitting of power plants in Texas based on new greenhouse gas emission rules.

The U.S. Court of Appeals slapped down Texas Attorney General Greg Abbott's recent challenge to the Environmental Protection Agency on Friday, one trying to keep the EPA from considering such emissions when they permit new facilities or approve large modifications on old ones.

A three-judge panel at the U.S. Court of Appeals for the District of Columbia Circuit ruled 2-1 that the petitioners — which included Texas, Wyoming and a handful of industry groups — didn’t have legal standing to bring the case.
Judge Judith Rogers wrote in the majority opinion that the states had failed “to show how they have been injured” by sharing permitting power with the EPA.
Abbott, running for Governor since about 2006 or so, previously described the EPA rules as part of an “unprecedented and overreaching greenhouse gas environmental regulatory scheme” run by the Obama administration.
That this was all for show is a given. If Abbott had won the case, utilities wanting to build new power plants wouldn't have been able to get permission to do so. Like all of his two dozen previous lawsuits against the EPA, this one was more political than procedural.
Eventually, Texas will have to write its own greenhouse gas emission regs to correspond to the EPA. Eventually.
Posted in Air Quality, Climate Change, Coal, EPA, Greenhouse Gases, TCEQ and tagged Greenhouse Gas Pollution, Greg Abbott