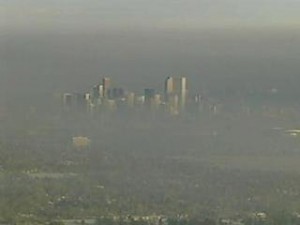 At least 600 tons of air pollution a day caused by the oil and gas industry in Colorado is causing a lot of consternation, especially in the Denver Metro area, which, like DFW, is currently out of compliance with the Clean Air Act for ozone, or smog.

Oil and gas emissions now are the main source of volatile organic compounds in Colorado and the third-largest source of nitrogen oxides, at a time when a nine-county area around metro Denver is already failing to meet federal clean-air standards, state data show.

The state is home to approximately 50,000 wells with an average of 2000 new ones drilled every year. Democratic Governor John Hickenlooper has put a nine-member Colorado Department of Public Health and Environment air quality control board in charge of making recommendations about how to deal with the large amounts of smog-forming and toxic air pollution being released by the industry.
Among the measures being mulled by state regulators are:

• Establish leak-detection and repair requirements for oil and gas wellheads and compressor stations,

• Encourage the routing of natural gas into a sales pipeline within six months after new wells are drilled.

All good ideas, but based on our own experience, we're not sure they'll do much to stem the tide.