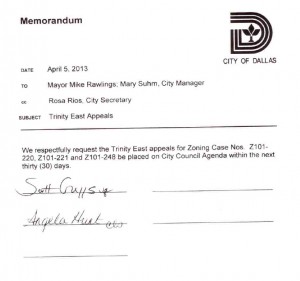 Tired of fighting a rear-guard battle over 2007 gas leases that should have been dead and buried by now? Us too. And so are Dallas Council members Angela Hunt and Scott Griggs.

Last Friday they circulated this memo to their 13 other council colleagues looking for three – just three – signatures to add to their own in officially calling for a vote on the Trinity East gas permits. They need five members to make sure it goes, and stays, on the council's business agenda. As of Monday, they hadn't gotten any takers.

This is important because right now, with this council that meets until May, Angela and Scott believe they have the four "no" votes it would take to prevent the council from overturning the City Plan Commission's denial. If they're right, such a vote would be the last word on the matter and the permits would finally be history.

A couple of months ago, supporters of the permits wanted a vote ASAP. Now, not so much. That was before citizens won two consecutive votes on the permits before the City Plan Commission despite City Hall and industry's best efforts to try and steamroll them through. Now, supporters say, it's time to slow down and wait for maybe the next council – which could be even more pro-drilling than this one. They say this with a straight face even though Trinity East itself is calling for a vote on the permits now, just like us.

Which is why we need you to once again let your fingers do the protesting and send a quick click n' send e-mail message to all 15 city council members: Vote NOW and Vote NO.

In particular, these current city council members are running for re-election in contested races this year:

Delia Jasso and Scott Griggs are running against each other in District 1.

If you can vote in a contested city council race, please make sure you note this in your message to the council, along with the fact that not signing Hunt's and Grigg's memo will factor in how you vote in that race. And to learn how all the city council candidates responded to the Dallas Morning News's question about gas drilling, please see our Breather's Guide to the Dallas City Council Races.

You've been so good about showing-up when you needed to. Don't think this fight is won yet. The fate of these gas permits is still undecided.

We need all of you to take a minute and send your message to the Mayor and entire council now. We get five signatures and bring this to a vote before May 11th and we'll never have to bug you about going to yet another meeting about the Trinity East permits again.  Do it now: https://www.downwindersatrisk.org/featured-citizen-action/