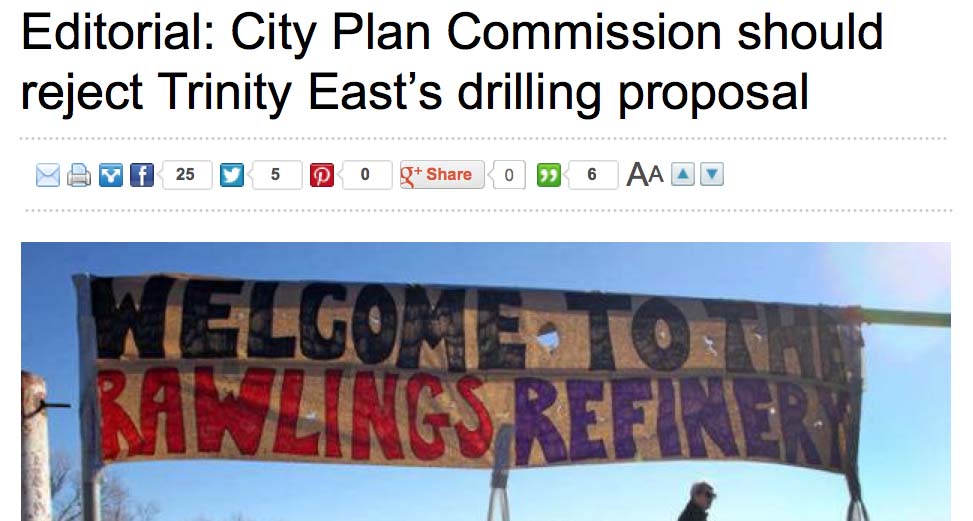 Win, lose or draw at Thursday's City Plan Commission vote, there is no question that, slowly, but surely, residents have built a consensus of public opposition to the Trinity East permits. For the latest proof, look no further than Wednesday's lead editorial in the Dallas Morning News advocating denial. It's the first time the paper has taken such a position. We know some of you can't get over the DMN paywall, so as a public service, here's the whole peice.

"North Texans have learned a lot about Trinity East’s gas drilling plans since December — and most of what we’ve learned is troubling. It’s been a train wreck of policy and process that has revealed both potential environmental concerns and questionable behavior at Dallas City Hall.

As a result, this newspaper recommends that the City Plan Commission once again deny the drilling permits at its meeting Thursday. And we urge city leaders to get to work immediately to find an alternative solution to this controversy.

The Plan Commission already rejected the Trinity East requests once, in December, but then succumbed to political pressure and agreed to the rare step of reconsidering its vote. The three special-use permits at issue involve Trinity River floodplain and parkland in northwest Dallas.

Chief among the reasons for a “no” vote is that Trinity East is seeking approval for gas drilling on the surface of parkland, a violation of city policy. The City Council approved the leases in 2008 with the clear understanding that there would be no drilling on top of parkland.

Second, the city still doesn’t know enough about the impact on regional air quality of a compressor station that Trinity East wants as part of its operation. This is problematic because North Texas already has a serious air quality problem, not to mention that youth soccer fields are planned near the drilling sites.

The city has opposed other heavy industrial uses proposed in the area on environmental grounds, yet hasn’t raised similar questions about the drilling proposal.

Third, and perhaps most troubling, is the way City Hall handled this deal. While City Manager Mary Suhm assured council members that no surface drilling would be on parkland, city documents show that — at the same time — she told Trinity East that her staff would assist the company in gaining council approval to do just that.

Additionally, Suhm acknowledged just a few weeks ago that a critical 22-acre tract of parkland was added to the lease without the council’s knowledge.

While the City Council will have the final say about whether drilling can go forward on the sites, the Plan Commission vote is critical. If the panel again rejects the proposal, it would take a hard-to-achieve supermajority of 12 council members to approve the permits.

It’s possible that a rejection will trigger a lawsuit against the city by Trinity East, which knew it was taking a gamble when it sought approval for surface drilling on parkland. Likewise, health and quality-of-life concerns about drilling have grown in the years since 2008.

The best course of action is for all parties to find a way to avoid litigation — and produce a solution that does not compromise the health and quality of life of Dallas residents."

If you want to leave a comment or a thank you, here's the online original.