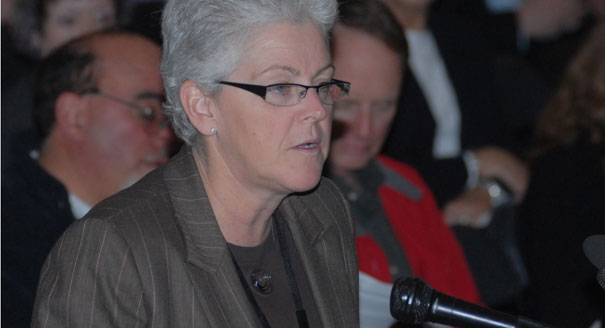 According to a number of different Washington-DC based news outlets, President Obama has picked current EPA Director of Air and Radiation, Gina McCarthy, as his choice to head up the entire Agency for his second term.

McCarthy was the EPA staffer in charge of explaining to citizens why new cement plant emission rules the Agency and the President had already signed-off on in 2010 were gutted last year just prior to adoption, despite unanimous citizen opposition to the changes at a national hearing at Arlington City Hall last August. Instead of a 2013 compliance deadline, the industry now has until 2015. And real time particulate matter monitoring was tossed in favor of a using a formula every so often.

In a meeting last year with kiln activists, she couldn't explain why the rule was being changed, who wanted it changed, or where the order to change it came from. It was a mystery even to the most cynical DC-based environmentalists. And now she's in charge of the whole show.

Some are interpreting McCarthy's promotion as a first step in the Administration taking executive action on climate change, since she headed up some recent initiatives on that front.

A Boston native, McCarthy came to Washington after serving as the top environmental regulator in Massachusetts and Connecticut under Democratic and Republican governors.

Former Massachusetts Governor Michael Dukakis, a Democrat, appointed her chair of a council to oversee a review of a proposed hazardous waste incinerator in the Boston area in 1990.

In 2004, McCarthy was appointed to head Connecticut's Department of Environmental Protection under then-Governor Jodi Rell, also a Republican, and helped lead the state into a carbon cap-and-trade system for Northeastern states, known as the Regional Greenhouse Gas Initiative.