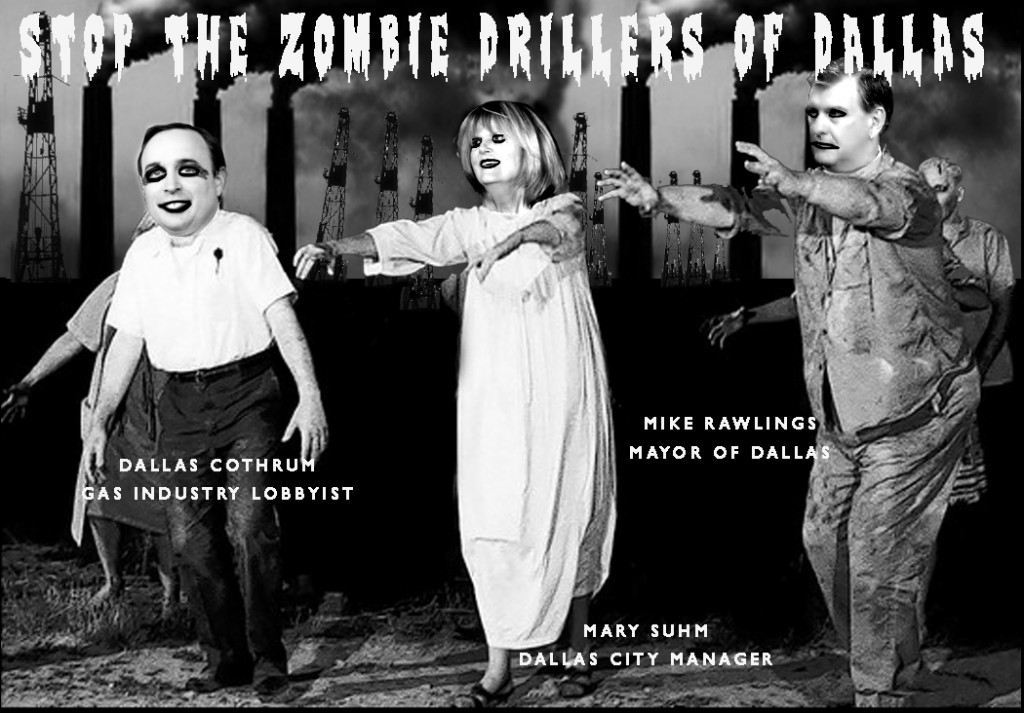 Because citizens unexpectedly won the rejection of Dallas drilling permits at December's City Plan Commission meeting, City Hall and the Gas Industry are trying to engineer a "do-over vote" this Thursday.

They're trying to give dead gas permits a second chance, but if we nail down the coffin this time, it could be the last vote on old gas leases on public land in Dallas.

That's why we need you to be there. Please.

Just last month Downwinders at Risk and other citizens groups held off the combined forces of Dallas City Hall and the gas industry only five days before Christmas.

The other side knew a lot of people wouldn't be able to attend a last-minute holiday meeting and they scheduled the first vote on gas permits in Dallas in two years to take advantage. They thought they would win.

But they thought wrong. Despite not being able to show up with the numbers we've previously enjoyed, citizens still carried the day with a 7-5 victory at the Dallas Plan Commission. The next stop was the City Council, or so we thought.

But the gas industry and City Hall has been scheming again.

They've called for a "reconsideration" of the December vote at this coming Thursday's City Plan Commission meeting – a "do-over vote" for the same gas permits that were denied in December.

Why? Because we won, and they can't tolerate that.

If the original December 20th Plan Commission 7-5 denial of the Trinity East gas permits stands, the City Council will need a 12 member "super-majority" to overturn that denial and award the permits.

If they can't find them, then these permits are never awarded and the last of the "grandfathered" Dallas gas leases on public land are nailed shut and buried forever for lack of Council support.

On the other hand, if this "reconsideration vote" wins, and the Plan Commission approves the gas permits on a second try, then the Mayor only needs 8 votes to approve the permit when it comes to the Council. These zombie gas permits mught live to threaten Dallas for years to come.

The Mayor thinks he has 8 council votes for approval – at least until the May elections. But he doesn't have 12.

So if you want to quit coming to City Hall for these kinds of votes for a while, we strongly advise you make this one. It's a proxy vote for the entire gas drilling issue with this council.

A Quick Reminder of Some of What's at Stake:

1) Trinity East and City Hall staff are asking the City Plan Commission to vote in favor of allowing drilling on public parkland – something that is currently not allowed.

2) Trinity East and City Hall staff are asking the City Plan Commission to allow drilling in the Trinity River floodplain – something that is currently not allowed.

3) One of drilling sites is in the middle of the newly-rechristened "Luna Vista" (LB Houston) Golf Course and by the North Hills Prep School.

4) At another site near the city's large new Elm Folk soccer complex, Trinity East and City Hall staff are supporting the construction of three gas compressors that could EACH release 25 to 300 tons of air pollution a year without any public notice. This air pollution includes carcinogens such as Benzene and Formaldehyde, as well as smog-forming pollution and greenhouse gases. That's 75 to 900 tons a year total, or 150,000 to 2 million pounds, of potential air pollution from just one proposed site every year. That's huge.

Please do three things to help:

We've set up a "click and send" e-mail message you can automatically send to members of the Dallas City Plan Commission and City Council through our own website at:

You can send our prepared comments as well as your own. But please do this right now – the vote is this Thursday and they need to see their mailboxes full this week. And please do this even if you did it for the first Plan Commission vote back in December.

2) Show Up on Thursday

90% of social change is just showing up. We know it's a hassle. But if you can take off work, if you can arrange for someone else to pick up the kids, if you can put off those errands another day, we really do need your warm body in a seat at City Hall to help us prevent this backdoor attempt to subvert democracy. Really.  At meetings like these, think of the room as one big ballot box. Each seat represents a vote. A ballot. When you sit down, you become a breathing, warm-blooded ballot for change. We need to stuff the ballot box this Thursday.

We encourage non-Dallas residents who have experiences with gas facilities they want to share to come and testify. Trinity East lobbyists love to talk about how great these facilities are elsewhere in North Texas.

It starts Thursday at 1:30 pm in the Council Chambers on the 6th floor of Dallas City Hall. The Trinity East gas permits may get moved up on the agenda or they may be the last item for action that day. Be prepared to stay. We want you to speak out and make comments, but you don't have to. Just be there.

Dallas City elections are this May. Many City Council supporters of gas drilling are now officially running for re-election. These council members, and their opponents, need to know how you feel about their support of irresponsible urban drilling. The Mayor thinks he still has 8 votes for drilling in floodplains and parkland with these incumbents. That number could be lower by June.

Let's be clear: Nothing has changed between December 20th and now to warrant a "reconsideration" of the original City Plan Commission vote to deny Trinity East's gas permits, except the desperation of the opposition. This is just a raw power play.

Trinity East and City Hall are mad at us because citizens are getting in the way of a "deal" that's already been "cut" between gas operators and City Hall.  We're imposing messy transparency and common sense on a backroom "business arrangement" that the public was excluded from when it was made.

We won the first round without many of you there. Now, we need everyone's help to defend that victory.  Show up on Thursday to help us throw another public monkey wrench into their private deal-making. Don't let them steal this vote. Thanks.