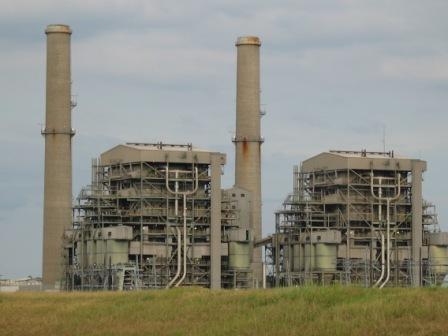 When it rains, it pours, or in this case, spews.

After getting a favorable ruling that struck down the EPA's flexible permit system last week, Team Perry seemingly scored another victory for its friends with Tuesday's ruling against the cross-state pollution rule.

Written by the Obama Administration to replace a similar Bush Administration rule that also got struck down by the courts (but is now back in at least partial effect…it hurts to think about this sometimes), the cross-state pollution rule was an attempt to federalize the problem of continental air pollution, much of it caused by big ol' dirty coal plants like the ones in East and Central Texas.

Texas can't regulate the coal plant pollution that wafts in from Illinois or Kentucky. Likewise, New York can't regulate Ohio facilities that send air pollution over its state lines. A federal solution covering all 50 states is required. Tuesday's ruling agreed, but concluded EPA hadn't given Texas and other states more time to come up with their own strategies to cut air pollution from coal plants. Maybe EPA was influenced by the fact that at the same time this strategy was being proposed, Governor Perry was rolling out plans to help streamline the permitting of 17 new coal plants in Texas.

Neither one of these rulings is as dreadful as it might seem at first. Both can be appealed. And both have mitigating circumstances that cushion the blow. With the flex permit case, all the facilities in Texas got standard operating permits eventually, making the ruling on the flex program itself moot. With the cross-state pollution rules, the Obama EPA itself said that two-thirds of all the health benefits from the rules had already been achieved with the partial implementation of the Bush rules they were meant to replace.

However, the cross state rules were not only supposed to be good in their own right, they also are the underpinning for a couple of other national pollution initiatives, including helping communities meet the new Ozone standard of 75 parts per billion, and the new, lower Particulate Matter pollution standard. Without the rules, these standards will be harder to achieve. And guess who's own plans begin to get mucked up by that failure? You guessed it, the state of Texas.

Because in the case of DFW's chronic smog problem, the Texas Commission on Environmental Quality had already factored compliance with the rule into its already obsolete 2012 clean air plan for the Metromess. That was one of the reasons we were going to see the lowest ozone levels ever recorded in DFW this summer. Without that backstop, it's going to be hard not only to just meet the old 1997 ozone standard of 85 ppb – something DFW has yet to do despite two official tries now over the last seven years – it's going to be hard to meet the much lower standard of 75 ppb.

If you've seen the TCEQ propaganda of the last couple of years, it touts how much pollution totals in Texas have decreased. The Commission uses these numbers to then promote the Perry Team philosophy of limited government intervention, suggesting that it's the TCEQ and Perry responsible for those declines. They are not. For the most part, what the state is touting are the results of federal programs that have decreased pollution systematically across the country – everything from new fuel and pollution standards for cars and trucks, to new federal standards for specific industries, like refineries and chemical plants. Throw in the things that federal citizen suits and pressure got done despite TCEQ – think cement plant pollution reduction in DFW for example – and you have most, if not all of the things reducing pollution in Texas that TCEQ is claiming credit for.

Without the cross state pollution rules, the oldest and dirtiest coal plants in Texas will continue to operate for the foreseeable future. And when the wind blows, some of their pollution will be breathed-in by DFW residents. In the short term, this is Team Perry's trophy for all you hard-working Texas residents – more crap in your lungs.

If the state keeps clearing away all the federal programs that have actually reduced pollution over the last 20-30 years, those total pollution numbers won't be going down much longer.  They'll be holding even and then going up. Left to their own devices, Team Perry would have us living in a polluter's Pottersville. And then who will the Governor blame?