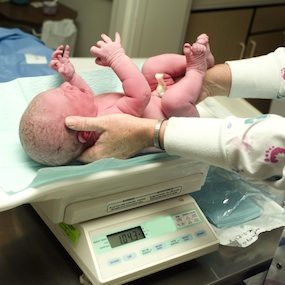 A mother's exposure to fracking increases the chance a a low weight birth by 25%, according to a new study by Elaine Hill, a doctoral candidate at Cornell University. Hill's research also found a 17% increase in "small for gestational age" births and reduced health scores among newborns whose moms lived close to fracking sites.

“Unconventional Natural Gas Development and Infant Health: Evidence from Pennsylvania” is the working title of the study, which has not yet been peer-reviewed or journal-published. Hill used data from 2010 and focused on those living up to 1.5 miles from gas development sites. Pennsylvania increased its unconventional natural gas wells from 20 in 2007 to 4,272 by the end of 2010.

Hill publicized her findings at a public hearing in New York state, which is considering new regulations for fracking. She decided to come forward now, rather than wait for up to two years for the review process to accredit her research because she believes her study has implications policy makers need to incorporate into those regulations.

“My study is robust across multiple specifications and it indicates that our future generation may be seriously harmed. I couldn’t possibly value my career over their well-being,” Hill said by email last Thursday.

We already have a Colorado School of Public health study released in March that shows a 66% higher chance of getting cancer if you live within a half mile of a fracking site. Hill's study is the first to track health effects up to a mile and a half away.

These reports are in addition to the hazard of earthquakes now officially linked to fracking waste injection wells by the US Geological Society, and the risk of getting silicosis from breathing in illegal levels of sand particles noted by industrial hygienists – both from earlier this year. All of this is new research that didn't exist before 2012. What other hazards are we ignorant of this year?

Just another reason why you should be at Dallas City Hall at 9 am on Wednesday, August 1st for the Thrilla on Marilla.