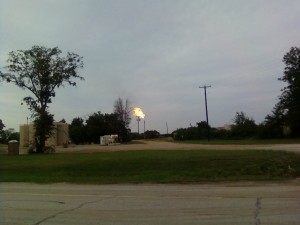 "Gas Emissions are too far west to impact DFW air quality." That was a statement by a Texas Commission on Environmental Quality air staffer at a Technical Committee meeting of the North Texas Clean Air Steering Committee in 2010 early on in the process of discussing a new clean air plan for DFW. That would be the same clean air plan that just crashed and burned these last three days or so. 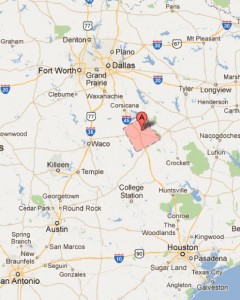 It was a part of clumsy attempt by the state to quickly refute the then newly-published Armendariz report that claimed there was more smog-forming pollution being emitted by gas industry sources than all the cars and trucks in North Texas. TCEQ's response in this case was to say, well maybe there is a lot of the stuff, but it's not located in places that really drive up ozone in DFW.

For their "study," the TCEQ was comparing a site in Parker County that was their "Barnett Shale" air monitor, with a "non-Barnett Shale" monitor at Eagle Mountain Lake.

Now you have to understand that in 2009, the area around the EML monitor looked like Spindletop circa 1901, with derricks spotting the landscape in all directions, including for miles and miles east and south of the Lake, which is in northwest Fort Worth. The idea that this monitor was "relatively unaffected" by gas industry emissions was laughable to anyone who'd actually been on the ground and visited the site. But this staffer clearly hadn't set foot outside of Austin except to come here and give this reassuring briefing.

And the TCEQ's logic went like this: Since the predominant winds during "ozone season" go from southeast to northwest, and since all of the gas emissions from the Shale were clearly "west" of DFW, there was no way that gas mining emissions impacted Metromess air quality.

When it was pointed out that there was plenty of drilling on the eastern and southern sides of the EML monitor, the staffer replied that the "majority" of Shale emissions were north and west of the metropolitan area.

It was a ridiculous argument then and even more so now, given how far east and south gas mining as advanced. There's active drilling and processing in seven of the 10 "non-attainment counties (Dallas, Denton, Ellis, Johnson, Tarrant, Parker, and Wise). The rigs have marched east along I-30 and I-20, from Weatherford to Ft. Worth to Arlington to Grand Prairie. Now the city of Dallas is re-writing its gas drilling ordinance in response to a new wave of requests to drill further east. There's no question that many ozone monitors that had no gas sources around them 10 years ago are now either surrounded and/or downwind of gas sources of air pollution in 2012.

And yet, this "gas pollution isn't in the right location to impact DFW air quality" argument is still being used by the TCEQ to avoid more pollution controls on gas sources within the now-10 county DFW "non-attainment" area for smog. 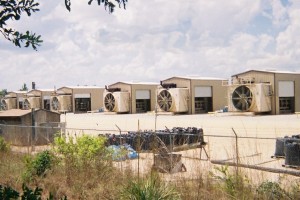 Last year the number of monitors violating the old 1997 85 parts per billion ozone standard that we can't seem to comply with shot up dramatically, from 2 to 7. And the direction of the violating monitors moved east, taking in Eagle Mountain Lake and Keller, but also  North Dallas and Frisco. This week, the single worst one-hour ozone numbers were from the Arlington Airport monitor, surrounded by gas drilling sources, and the first monitor to exceed the old 85 ppb standard was located at I-35 and Mockingbird in Central Dallas at a site that hasn't done that in seven years.

Hold on, Arlington may be in the thick of it, but Dallas isn't downwind of gas sources, is it?

For one thing, you have drilling and processing and injection wells in northern Ellis County, and their pollution is as likely to impact Dallas air quality, just as the Midlothian cement plants, located in the same vicinity, have been doing for decades.

But you may not be aware of the huge amount of pollution coming from gas sources in places southeast  – and upwind – of Dallas like Freestone County, otherwise known to clean air activists as the home to the dirty ol' Big Brown lignite coal-fired power plant.

Big Brown has earned a reputation for being an environmental disaster that lacks modern controls. It puts a lot of bad stuff in the air, up to 6,8,00 tons a year of smog-forming Nitrogen Oxides (NOx). That's approaching half a million cars' worth of air pollution right there. And that's why it's important to keep pressing Big Brown and all the other East and Central Texas power plants upwind of DFW to modernize and reduce emissions.

But here's the thing. Even though Freestone County isn't in the Barnett Shale, it's in the Haynesville Shale play of East Texas. It now has as many gas wells (approx. 3000) within its borders as Tarrant County – the epicenter of the Barnett.  It also has a lot of gas pipelines running through it. Those pipelines need compressors to keep them running. Consequently, Freestone County has a lot of compressors. 130 of them according to the TCEQ, up from 69 just three years ago. Each of these large line compressors can be permitted by rule – meaning its automatic and not open for public discussion – for up to 250 tons per year of Nitrogen Oxide pollution and 25 tons of Sulfur Dioxide and other kinds of pollution. 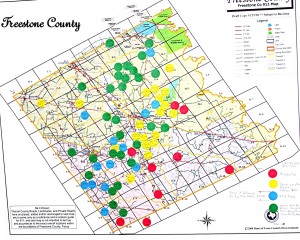 This is a citizen's map of all the gas compressors in Freestone County...in 2009. There are twice as many now according to the TCEQ.

Gas compressor permits in Freestone County represent the equivalent of 4. 7 Big Brown coal plants worth of NOx pollution. Every year.

Big Brown is actually being forced to reduce its emissions of NOx. It's switching from burning lignite coal to the "good stuff" from Wyoming and adding more controls. Compressors? Not so much. Their proliferating throughout the state with no accountability of how they will impact air quality – including non-attainment areas downwind.

Now add the phenomena that the Denver air quality folks have identified of already dirty air being able to turbocharge gas patch air into ozone pollution more quickly, and you have a large and potent pollution "front" blowing in from the southeast toward DFW to meet the prodigious amount of smog being generated in the central city.

That might explain why a monitor at Mockingbird and I-35  – on the eastern side of DFW – that hasn't tripped in seven years has done so again this summer.