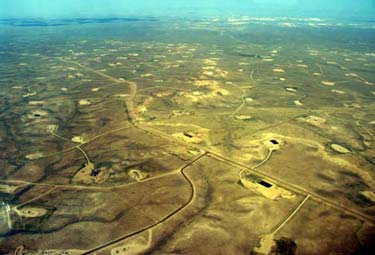 Via the journal Nature comes news that air sampling in the natural gas fields north of Denver have shown gas operators losing approximately 4% of their product to the atmosphere — not including additional losses in the pipeline and distribution system.  That’s more than either industry claims or government emissions inventories report. “If we want natural gas to be the cleanest fossil fuel source, methane emissions have to be reduced,” says Gabrielle Pétron, an atmospheric scientist at the University of Colorado in Boulder who helped wrote a summary of the findings. Much of the released methane comes from batteries of storage tanks, but a significant percentage is just “raw gas” leaking from the infrastructure. This data from the field is giving new credence to Cornell Professor Robert Howarth’s report from last year that concluded natural gas actually released more Greenhouse Gas pollution than coal over the lifetime of each fuel’s use (R. W. Howarth et al. Clim. Change Lett. 106, 679–690; 2011). “I’m not looking for vindication here, but [the NOAA] numbers are coming in very close to ours, maybe a little higher,” he says. We’ve written before about the crossroads Dallas is facing in allowing gas drilling as the only North Texas city committed to a plan to reduce Greenhouse Gas pollution. This new study suggests that it will be impossible for Dallas to honor its commitments for those reductions if it allows drilling without compensating for the increase in Greenhouse Gas emissions somehow.