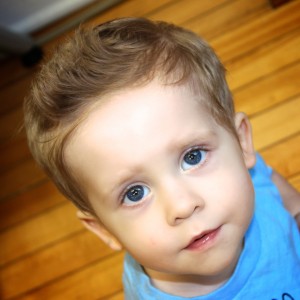 When the phenomenon of toxic exposures first hit the popular culture, it was all about cancer risks. This or that chemical or product increased your cancer risks. Cancer risks still define the way the EPA regulates chemicals with a theoretical safe threshold of one cancer case in a million. Cancer is the headliner of environmental health impacts. It's the bluntest short cut to labeling a substance as toxic.

But the last twenty years of research have been all about examining the less well-known, but perhaps more insidious non-cancer impacts on the human body of toxic chemical exposures. Damage to immune systems that then lead to more serious illness, links to debilitating diseases like Parkinson's and Alzheimer's, more abrupt consequences like strokes and heart attacks. And birth defects.

Birth defects are one of the most underrated impacts of toxic exposure, but they're capable of slowly but surely changing the characteristics of humanity itself.

There is now a whole new school of study, "Epigenetics," that didn't even exist a decade ago. It examines how damage of a person's DNA, or the factors influencing how that DNA works, are passed down to subsequent generations. Such damage can skip a generation, or two, so that your grandfather's or great grandfather's exposure to really bad stuff at his workplace affects your DNA and physiology today.

By allowing so many untested chemicals into the marketplace and making citizens swim through them as they go about their lives, industry and government are conducting a planet-size laboratory experiment that we are always trying to understand after the fact.

Another example of new knowledge is the discovery and labeling of certain chemicals as "Endocrine-Disruptors." Before the mid-1990's, we didn't even have such a phrase.

Our endocrine system is the network of glands and hormones that regulates many of the body's functions, including growth, development and maturation, as well as the way various organs operate. The endocrine glands — including the pituitary, thyroid, adrenal, thymus, pancreas, ovaries, and testes –– release carefully-measured amounts of hormones into the bloodstream that act as natural chemical messengers, traveling to different parts of the body in order to control and adjust many life functions.

Endocrine disruptors are chemicals that interfere with that signaling and regulation of body functions, and produce adverse developmental, reproductive, neurological, and immune effects in both humans and wildlife. They include Dioxins, Phthalates, DDT, PCBs, and Bisphenol A (BPA), and pose the greatest risk during prenatal and early postnatal development when organ and neural systems are forming.

Past studies of the effects of endocrine disrupting chemicals have often focused on the vulnerablity of reproductive systems to exposure to endocrein disruptors, producing the now familiar stories of male fish with female characteristics or via versa. In uterus, a fetus' chemical wiring can be crossed or short-circuited.

A new study from France involving over 600 boys looks to add to this trend, concluding that a expectant mother's exposure to Endocrine-disrupting chemicals raises the risk to a specific male birth defect, Hypospadias, by almost 70%.

Hypospadias is a condition where the opening of the urethra is on the underside of the penis rather than at the tip. The defect, which can be minor or quite severe depending on how far the opening is from the tip, can lead to problems with urination and, later in life, sexual difficulty.

The risk for those boys whose mothers were exposed to Endocrine disrupting chemicals was 68 percent higher than the unexposed boys. The researchers ruled out baby boys with known genetic risks for such defects. Working with hormone disrupting chemicals and living in homes near heavy polluters were both linked to more baby boys having the defect. Mothers were most likely to have boys with hypospadias if they worked as a cleaner, hairdresser or beautician. However, the researchers did say a limit of the study was attempting to estimate fetal exposure to such chemicals.

In a previous study, mothers in southeast England who were heavily exposed to endocrine disrupting phthalates on the job were about three times more likely to have a baby boy with hypospadias. Phthalates are used in some cosmetics, fragrances, food packaging and PVC plastics.

Hypospadias is one of the most common genital defects in baby boys, and most cases require surgery, often done before they reach two years old. In the United States, an estimated five out of 1,000 boys are born annually with hypospadias, while Europe’s rate is slightly less than two out of 1,000. “Nobody dies from hypospadias," said one of the researchers. "Most are cured with surgery, but if we can come up with some kind of prevention protocol, it could prevent a lot of surgeries and anxiety for families.”

Posted in Toxicology and tagged Endocrine Disruptors
Leave a comment

It may come as a shock, but the EPA and industry view exposures to toxic chemicals in basically the same way that a famous 16th-Century  occultist named  Paracelsus did over 500 years ago: The amount of exposure to a chemical determines its toxicity; the higher the dose, the more toxic it is. The lower the dose, the more benign. "The dose makes the poison."

This approach says there's a linear one-to-one relationship between volume and harm. It's the basis of all federal, state and local environmental health regulation. It's what drives government "risk assessments." It's what allows there to be such things as "safe levels" of things that don't sound very safe.

But, what if this approach didn't capture all of what was going on physiologically between poison and victim? What if there were different effects happening at the cellular level?  What if, like the Renaissance-born theory of Newtonian physics, it couldn't account for phenomenon on a smaller-scale because it didn't have the ability to see it? What if there were certain poisons that,

"depict a weird world of endocrine disruption that is as different from traditional toxicology as quantum mechanics is from the staid clockwork of Newtonian physics. When even minuscule quantities of BPA and other disrupters interact with hormone receptors at crucial moments in development — activating, jamming, hijacking or otherwise messing with their normal function — they can give rise to strange-looking experimental results, especially when other hormones are thrown into the mix."

From the journal Nature comes a case study in why no self-respecting thinking person would trust the current regulatory system to give them the final word on whether any given chemical exposure is "safe" or not.

A citizen can't underestimate the kind of threat this research presents to the Environmental Industrial and Legal Complex. Every permit ever written and awarded. Every environmental law every passed. They all depend on a Paracelsusian view of the world. Prove a different world exists and it turns everything upside down.

"A growing number of academic researchers are making just such a claim for endocrine disrupters, a large group of synthetic chemicals able to interact with cellular hormone receptors. These compounds, which range from the common weed killer atrazine and the plasticizer bisphenol A (BPA) to the antibacterial agent triclosan (used in cleansers) and the vineyard fungicide vinclozolin, don't play by the usual rules of toxicology. On the basis of conventional high-dose testing, regulators have set maximum acceptable levels for each of them that assume all doses below that level are safe. But academic researchers who have studied a wider range of doses, including very low ones found in the everyday environment, say that their experiments usually do not generate the tidy, familiar 'ski-slope' dose-response graphs of classic toxicology. Instead, most endocrine disrupters have 'non-monotonic' dose-response curves, meaning that their slopes change at least once from negative to positive, or vice versa, forming 'U' shapes, inverted 'U's or even stranger shapes that resemble undulating Chinese dragons."

It's not just endocrine disruptors that are challenging tradition. We're already seeing the contradiction between the latest science and regulations when it comes to old-fashioned poisons like lead and soot. There's a scientific consensus among the frontline researchers that there's no safe level of exposure to either one of these toxic substances, And yet, permits are still being written to allow what regulators claim are "safe levels" of them to be spewed into the air and our lungs.

The more we can see what's happening at the smallest levels of things – whether its the vibrations of atoms in the chair you're sitting in, or the nuance of chemicals in the cells of a developing fetus – the more we find out that things are more complicated than they appear. Science is pushing us in the direction of a "Precautionary Principle" approach to regulating human chemical exposure. That's a radically different perspective that undermines the billions invested in the status quo allowing continual low level poisoning. After 500 years, maybe it's time to find a new model.