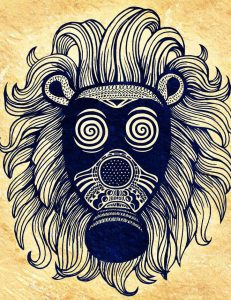 2019’s “ozone season” came in like a lamb but is headed out as big, wheezy lion.

A three-day stretch from Thursday September 5th to Saturday the 7th that combined triple digit temperatures with lots of air pollution was enough to push Dallas-Fort Worth smog numbers for the year over 2018’s annual average.  It was the first year-to-year increase in ozone levels since 2015, and more than enough to insure DFW will be in violation of the Clean Air Act for the 28th year in a row.

Because the formula for arriving at these averages is so convoluted, discounts the highest three numbers, and is stretched out over 8-hour periods, it takes a lot ozone to make them go up even incrementally. Raising the annual average by even one part per billion (ppb), from 76  to 77, as occurred by Saturday evening, hides a lot of Really Bad Air. Smog levels were in the 90’s and even close to 100 parts per billion at monitoring sites in the northern part of the Metromess. EPA’s national standard for 8-hour exposure to ozone is a 70 ppb average.

Three sites saw their 2019 highs set during this 72 hour period. Frisco had an eight hour average of 88ppb on Saturday, Keller 84 ppb and North Dallas 83ppb. There were four hours on the afternoon of the 6th when smog was over 90 ppb in Frisco.

That’s reminiscent of the bad ‘ol days from the Turn of the Century when levels in the upper 90’s and even topping 100 ppb were routine. Since 2000, there’s been a more or less steady fall in smog in DFW thanks to better controls on combustion-powered vehicles, and the citizen-induced decreases in pollution from Midlothian cement plants and the retiring of East Texas coal-fired power plants. In 2000 DFW’s annual ozone average was 102 ppb. It’s taken 20 years to lower that number to the high-to-mid 70’s. For the last three years we’ve seen decreases of 3, 1 and 3 ppb. 2019 halts that downward trend.

Beside the human health toll these numbers represent – an increase in asthma attacks, ER visits, strokes and heart attacks. – they also represent a challenge to government. This increase comes as the usual planning process to reduce dirty air in DFW sits in tatters. In fact, there really is no process anymore.

In the past, the North Central Texas Council of Governments (NTCOG) would bring the Chambers of Commerce, elected officials and some environmentalists together to cobble out a list of proposed strategies to reduce smog, then submit it to the Texas Commission on Environmental Quality in Austin where it would get watered down by corporate lobbying. Nevertheless, those past plans did have an influence on tightening emissions for ancient cement kilns and other industrial sources and they can take some credit for the two-decade decrease in smog. 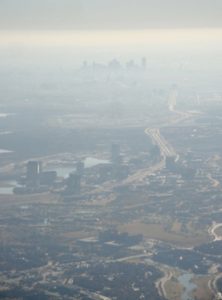 But that process hasn’t taken place since even before the current administration took office. The last plan submitted by the region to the state was in 2013. Because Austin kept ignoring most of the region’s recommendations, NTCOG just gave up trying after that. It’s Clean Air Steering Committee was disbanded and hasn’t met for six years now. Despite approaching our fourth decade of illegally bad air there’s no official body in DFW working on a regional clean air plan. Everything is being run by Greg Abbott’s state agency  – one that doesn’t believe there’s a climate crisis, wants to increase permissible exposure for dangerous pollutants, and whose former Toxicologist in now leading the Trump administration’s efforts to roll back federal pollution standards.

It’s doubtful a single part per billion rise in the regional average will prompt reconsideration of this laissez-faire approach. But it should.

Before the 2016 election, Downwinders was trying to pave a path for the federal government to take away the power of Austin to determine DFW’s clean air progress. We had hoped to have EPA delegated as the “final cut” author of a new clean air plan. Trump’s election made that impossible. But should this administration be gone by 2021, that strategy is still one local residents would be wise to pursue. As long as the State’s environmental agency is in the hands of anti-science flunkies and fanatics, there will be no concern about DFW smog in Austin.